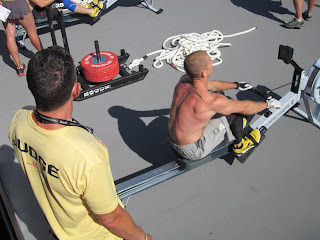 Had more planned today but wasn't really feeling it in the morning.  Had planned to hit "Jackie" in the afternoon to test things out for the team Regional--just had to lay down instead.  Sometimes fatigue sneaks up on you and you gotta listen.  I was still able to get through the push presses and jerks, which was the main work slated, so at least the day wasn't a total loss.  I got 38 reps at 185#, same as last week, but I've noticed that my heavy days on Monday/Tuesday tend to leave me with a bit of a training hangover until Thursday.  We're planning on heading down Saturday morning to East Sac with their team, so a little extra rest and preparation isn't such a bad thing.
Posted by anywherefit at 4:17 PM