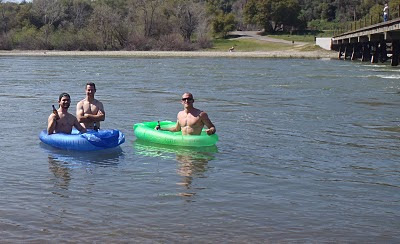 Ice baths are no new thing, and I’m sure most of you out there are familiar with their benefits. But, just in case, here’s a brief rundown on why icing is so good for your muscles…

It’s all about circulation. When you get into an ice bath, the icy cold water causes your blood vessels to tighten and squeeze the blood out of your legs. This process is exacerbated by your body’s instinctive need to maintain a core temperature of 98.6. Initially the heart will pump more blood to the chilled area in an effort to keep it warm, but after a few minutes it recognizes this is a losing proposition and decides it can’t risk its vital organs by circulating blood through a freezer. This is why after 10-15 minutes of iced submersion it feels like you’re standing on stumps of inert matter rather than legs. There’s literally just a trickle of blood left down there.

This is all well and good if done for a manageable time period. A) With that fleeing blood goes most of the inflammation and toxins that have collected in your soft tissues during exercise. B) When your legs fill up with 'new' blood it invigorates your muscles with oxygen and helps the cells function better. Your body will continue to circulate blood to the chilled area, bringing with it the nutrients needed to adequately recover, until it returns to normal temperature. This is why 20-30 minutes after an ice bath you will still feel chilled all over—the blood moving through your legs comes back to the heart just above freezing.

The benefits of Vitamin D aren’t quite so well known. To help this situation I’ve compiled a short survey of the best information out there on the subject…

First, it seems readily apparent that people flush with Vitamin D can expect better health across the board - longer life (reduction in death from all causes), fewer diseases, stronger bones and muscles, fewer infections, less depression, pain and inflammation. In short, more enjoyment of life. If you doubt this just look to any island community and tell me those people don’t look, feel, and act better than the land-locked. (Japan excepted for the time being) (Too soon?)

Second, we are only scratching the surface with how our body utilizes Vitamin D. New benefits are still being discovered, almost everywhere researchers look. Here are some of the more important ones discovered so far:

The first intimation of vitamin D's vital role was in 1782, when it was discovered that cod liver oil cures rickets (a disease of growing children whose bones bend due to lack of strength). Of course, they didn't know then that it was vitamin D in the oil that did the job. Vitamin D itself was isolated in the 1920's, but for several decades, all that was known about its usefulness was that it prevented rickets. In fact, vitamin D plays a major role in the absorption of calcium and phosphorus, and in their proper utilization. This helps keep our bones and teeth strong, and stops calcium depositing where it shouldn't (for example in our blood vessels, heart and kidneys).

Vitamin D is essential to a healthy immune system

Vitamin D helps the immune system to fight infections. With a near-optimum blood level of vitamin D, you can expect fewer colds, 'flu, and other unwelcome opportunists (including Swineflu). Not only does Vitamin D enhance your immunity, but it inhibits the development of destructive auto-immune diseases such as diabetes, rheumatoid arthritis, lupus and multiple sclerosis. Vitamin D is a major inhibitor of cancer, and part of this effect may be attributed to the increased vigilance of the immune system.

Vitamin D encourages cell differentiation (differentiated cells are needed to perform specialized functions effectively) and also slows down the rate at which cells multiply, or proliferate. Both of these effects contribute to vitamin D's cancer-fighting ability. Cancer cells are characterized by a lack of differentiation and by rapid proliferation.

Vitamin D is a potent anti-inflammatory

Chronic inflammation is coming into prominent focus as a cause of many disease processes, including major killers such as heart disease and cancer.

Vitamin D is a powerful anti-inflammatory agent, which may also contribute to its effectiveness in reducing some types of muscular pain.

Dr Daniel Hayes PhD describes many ways in which vitamin D may protect the body from the effects of low-level radiation, such as may occur after a nuclear accident. His paper was published in the International Journal of Low Radiation (Sept 2008) With the disaster at Fukushima looming large in everyone's mind, more people need to become aware of this vitamin D benefit. It makes sense that a nutrient requiring exposure to strong sunlight would confer a protective benefit against electromagnetic radiation.

So, the take away here is that chilling outside in some ice cold water and direct sunlight will lower inflammation in your tissues, increase your body’s ability to absorb and use calcium and phosphorus, lower your risk of cancer and practically every other disease, fortify your immune system against bacteria and viruses, and is a potential shield against nuclear meltdowns. In the case petitioning for outdoor parties at the river all summer long, the defense rests.

Posted by anywherefit at 5:18 AM