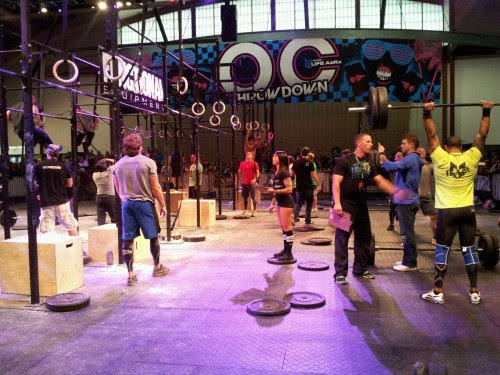 My absence the past two weeks has not been merely by chance. They have been a down-cycle of training due to the highly touted “winter games” competition down in southern California. I tapered the week prior and have been recovering the week since, hence a lack of material to blog about. With the event in the rearview, however, said lack of material has changed.
My performance this past weekend was decent, not great. I Pr’d both my deadlift and my strict press (480#/190#), went to the brink of collapse on a classic couplet event (kb/burpee lactate monster), and was an inch away from an incredible finish on a high volume muscle up workout (damn you Al Pacino and your single solitary inch!!!). I also knocked out a bunch of ring hspus in a WOD without failure for the first time and successfully strategized my way through 40 oh squats and 60 pullups. That being said, I also stunk it up on double unders and handstand walking, mis-managed my back squat attempts, and was merely average on a max height box jump. So, good showing, but definitely room to improve.
Now for the actual event.
The throwdown itself was built up unlike any crossfit competition outside of the Games that I have ever seen. There were multiple Games veterans invited to compete (yours truly included), and the buzz surrounding this fact was palpable. Seeing the likes of Nate Schraeder, Tommy Hackenbruck, Kris Clever, Gabe Subry, Rebecca Voight, Patrick Burke, etc. walking around chatting with each other in between WODs set this event apart from other local throwdowns. Also, the stage on which this production was held could’ve supported a full scale rock concert. 100 foot banners hung from the ceiling… there were press passes, vendor tents, a massive sound system, and grandstand bleachers for spectators to cheer from. Justin and Darren took amazing pains to put this thing on and it showed in the spectacular final product. Walking into this arena felt very much like it did at the Games. The nervous energy, the adrenaline of competing against the world’s best, and the electric atmosphere of a place packed with fans. This experience alone was enough to make the weekend enjoyable.

But behind the outstanding production value, the event was wrought with issues. The scoring system was a disaster, with no one knowing at any point where they stood, how the events had shaken out, or what the cutline was to be. The events themselves were limited in scope, never lasting longer than 8 minutes. The strength element was tested during the total, then negated by an independently scored box jump. (So the total of 3 lifts (deadlift, back squat, and press) counted as much as the height of your box jump. Actually, come to think of it, the box jump counted as much as any other WOD we did all weekend.) Eh? What’s more, the distance from which you could jump was set for all parties. A taped square on the floor served as your boundaries from inside of which you had to start your jump. This meant that as the box got higher and higher you still had to jump from the same starting point—not a big deal early on, but damn near impossible for the taller competitors once things got close to 50 inches. 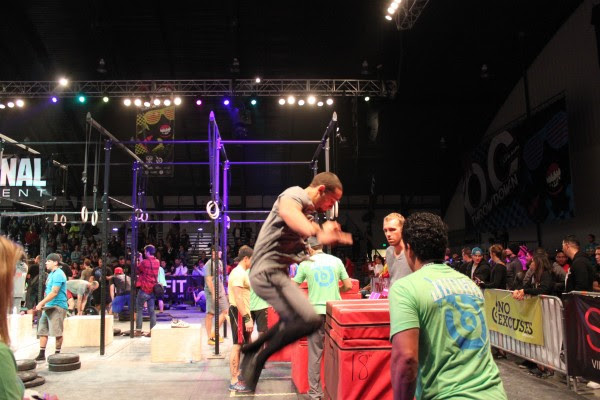 That aside, the scoring and the events can be annoying, but in the bigger picture they don’t matter as much to pulling off a fair and legit event. Regardless of what you program, so long as things are consistent for all parties it will turn out fine. Unfortunately, the judging and standards during the weekend were largely non-existent. Scores were hardly comparable between heats or WODs because few to no judges had the same understanding of the parameters. Example 1: the floater WOD was a couplet… 15-12-9 of kb swings and burpees with a lateral jump; rest 2 minutes, then 12-9-6 of the same movements. The briefing told us the kbs were to be held vertically to the heavens with arms extended and the burpees were to be done with a jump over the divider. By the 5th heat there were athletes bent arm raising the kbs and diving over the lateral barrier into a plyo pushup, never landing on their feet. Every judge was there simply counting reps not knowing any different. Example 2: The muscle up/squat clean workout required the rings to be set a fist’s height above your standing reach, yet half the competitors began their reps from a box, effectively negating the need to jump to the rings. Example 3: The ring handstand pushup/oh squat/pullup workout was described as such: handstands must be arms locked out and legs locked out in a handstand, the oh squats must start from the top position (no squat snatches), and the pullups must show ear and chin above the bar. What actually happened was that most men locked out their arms and legs, but left their body in a U-shaped back bridge, and then proceeded to squat snatch every first rep. Judges were there, of course, counting reps.
Most of this is merely a lack of communication from the top of the event down and can be corrected as such with a little more time and preparation. With so many moving parts there’s a lot that can slip through the cracks. An indication of this state of affairs was on display during day 1 when, without doubt, the most blatant and disrespectful display of sportsmanship I have ever seen at a CF event went unchecked. During the muscle up WOD the competitor to my back (Ronnie Teasdale) was told by the head judge mid-rep that he could not bounce his bar from the top of his thrusters into his next squat clean. He proceeded to call this person a “fucking bitch,” shove her to the side with his hand, and then unceremoniously toss the bar in her direction upon completion of his set. I have seen multiple video clips of this unfolding as a few of my friends managed to get both of us in their screens. I literally couldn’t believe what I was watching. This was brought to the attention of the event administrators by multiple people and nothing was done. How any judge can be expected to uphold standards when that type of shit is allowed to go on is beyond me.
The event unfolding as it did led to plenty of conversation about how difficult it must be to get everyone on the same page. Having run events like this in the past, I can attest that this is true without a doubt, and I’m not trying to minimize the effort of the organizers to do this in any way. But it’s also the single MOST important thing to get right. It didn’t end up mattering much at the top of the standings in the elite division, Tommy and Kris were the two fittest competitors there in my opinion, but it casts a horrible shadow over the legitimacy of the event as a whole. I respect the hell out of Justin and Darren for what they and the Orange Coast CrossFit group were able to accomplish down there this past weekend. Getting that many people excited for an event that has no connection to the CF Games is unbelievable. I mean, they sold 3,000 spectator tickets - that’s unreal. There were athletes from all over California, Florida, North Carolina, and many other states. But you can’t gloss over the fact that this thing felt like it was a mile wide and an inch deep, like one of those blockbuster movies that spent the entire budget on CGI and forgot to pay the writers. I don’t mean to sound harsh or ungrateful, because I really did enjoy the weekend and would probably do the whole thing over again if I had the option, but some things need to be said.

I have no doubt that the shortcomings of this year’s throwdown will be fixed by next year’s edition and that it will carry the momentum it gained in this, it’s experimental big year, into a big future as one of the community’s largest, most anticipated events. For me, I’m looking forward to kicking the shit out of myself and using what I learned at the OC Throwdown to better prepare myself for the real thing this summer.
Posted by anywherefit at 12:19 AM