Colin collected me from the airport early Friday morning after approximately 18 hours of travel.  I was groggy, a little numb from the series of flights and time changes, but still excited about the opportunity to experience something new and exciting.  The weekend we had planned was to be a perfect balance of wilderness and civilization, blending raw, outdoor workouts with fine dining and traditional Irish pastimes.  The only thing that could muck it up was weather, and I was dutifully warned this wasn’t something to be counted on in Ireland.  But as we walked from the terminal to the car I had a good feeling.  There were clouds, but not dark ones, and the air felt light and breezy.  Something was telling me through my numbness that we would be okay with the weather.  It was right. 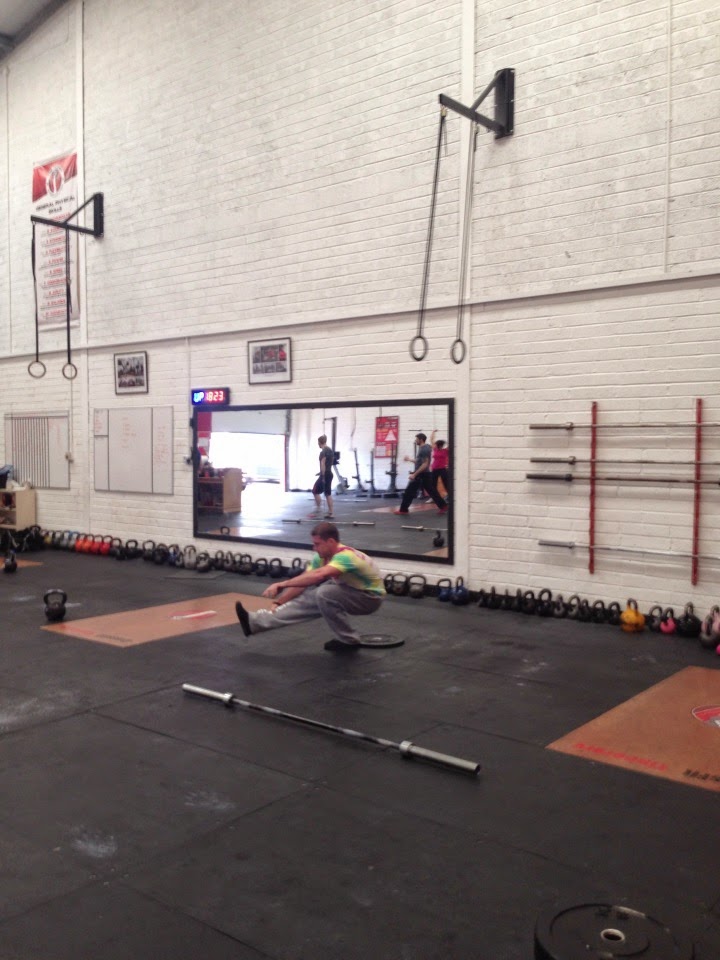 First stop from the airport was the Colin’s gym, CrossFit Tipperary in the town of Clonmel, where I got to meet a few of the guys who would be joining me for the duration of the weekend.  The bulk of the groups wasn’t set to arrive til later that afternoon.  The box was great.  High brick walls on all sides, painted white but stained gray in parts from years of use.  Pullup rigs on two of the walls, and high hanging ring brackets coming out of a third wall above an endless sea of kettlebells.  It was clean, spacious, and had all the trappings of a killer place to train.

Right about this time my stomach was ready to eat itself, so Colin and I made the round of introductions in short order then shot off for some breakfast.  We went into town to a place called Nimh’s, which turned out to be a bakery in front and a café in back.  I ordered the most enormous thing I could find on the menu…a full Irish breakfast plus potato waffles and coffee.  If you’ve never been to this part of the world, you’ve probably never experienced breakfast the way they do it.  Be it in England, Ireland, Scotland, or Wales, the standard morning fare is some variation of the following:  Bacon/rashers, sausages, baked beans, fresh tomatos, hash browns, mushrooms, white pudding, black pudding (“pudding” equals fried pigs blood, just so you know), and a fried egg.  While I still might prefer a 3 egg omelet most days, I love the UK and Ireland for maintaining this tradition. 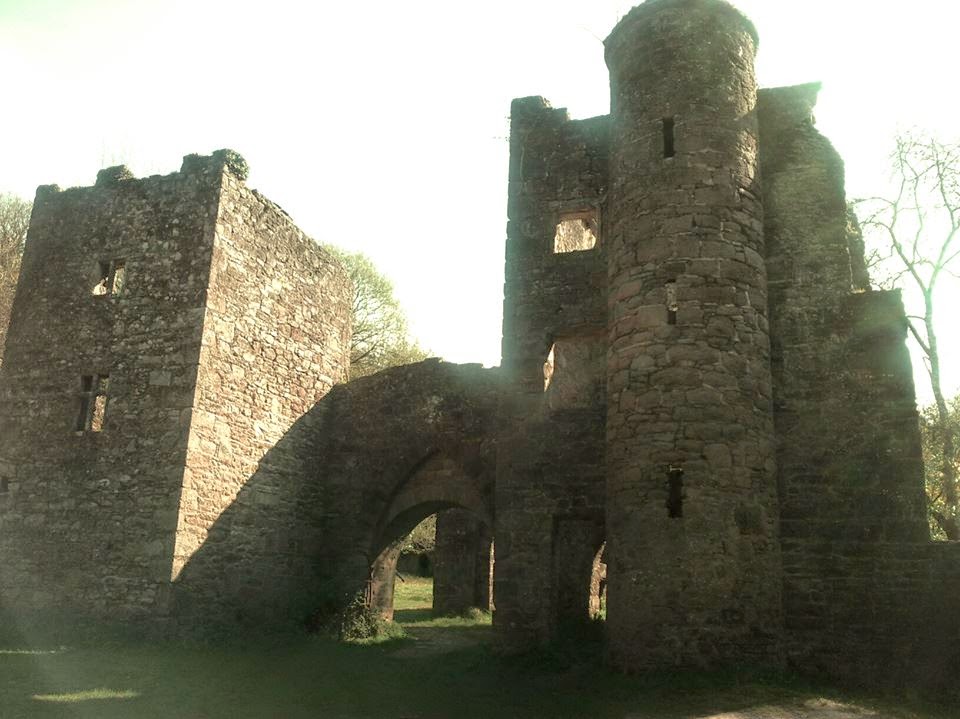 After breakfast a few of us went on a small scouting expedition to one of the locations for Day 3 of the trip.  Colin said that his box frequented a small creek not far away that featured a jogging trail and a series of pools useable for jumping in and cooling off.  “Cooling off” in Ireland means “icing” in the rest of the world.  The area around the creek was beautifully forested and covered in green moss, but the water itself was freezing.  Despite my California roots, I’ve never been one to shy away from a good ice bath, especially since I knew my body could use a reset after all those hours on the plane, so in I went.  Correction, in we all went.  3 separate times.  That was the cool part about this: you run a ways, then jump in (shoes and all), run a ways, jump in.  It wound up being like a mini mud run, but with way less people and waiting in line.  At the bottom of the creek sat an ancient stone monastery where we were planning to do a fun workout on Day 3.  This part of the world is replete with relics like this, making it a dream vacation for anyone obsessed with history. 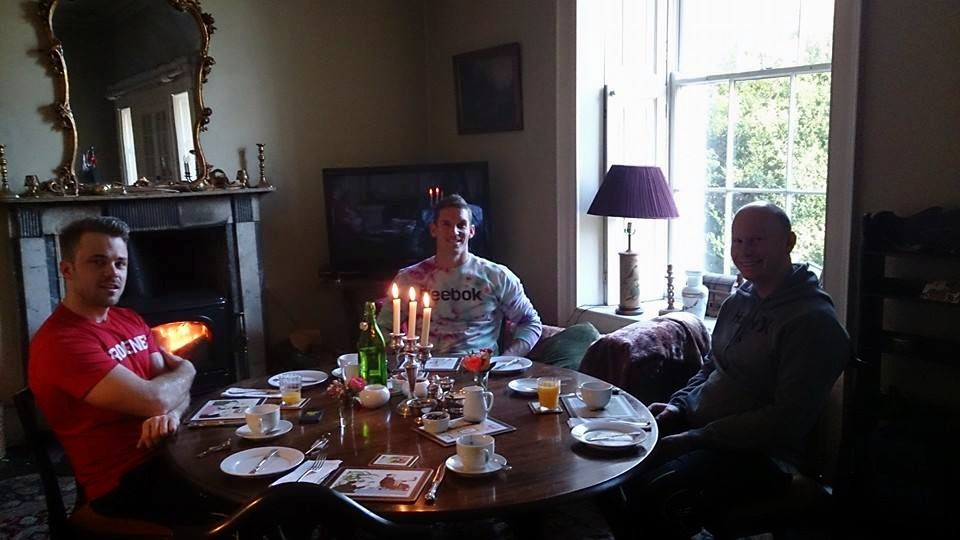 After our run I got checked in at my residence for the weekend, the Clonacody House.  This is not your average B&B, though that’s probably the way it’s listed online.  I’m talking an authentic Irish countryside experience—from the hundred-year old floorboards to the horses trotting and grazing out back.  This place was an absolute dream.  Helen and Michael, the live-in managers, inherited the place from Helen’s family awhile back and decided to turn it into a venue for travelers and events about 4 years ago.  They renovated the spots that needed updating and the resulting structure is no less than magnificent.  The main house stands 3 stories tall with a basement below.  The ground floor consists of a living room, drawing room, dining room, and kitchen, all of which boast 15-foot ceilings and ridiculously ornate moldings and finish.  The 2nd and 3rd floors hold all the bedrooms and baths, 7 in all.  The furniture is rustic and country inspired, with enormous Victorian bathtubs in all but 2 of the bathrooms.  Needless to say, I was stoked to be staying there.  Surrounding the main house are acres upon acres of land, including grazing fields, gorgeous trees and gardens, and an ancient barn & courtyard that serve as the work area for Michael. 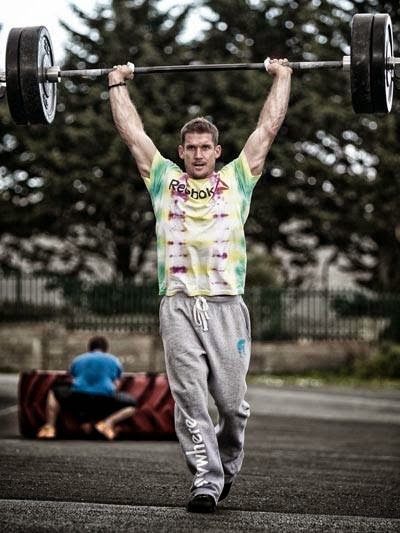 We agreed that I would lie down for a few hours to try and catch some rest, then head to the gym for a workout before the majority of the group arrived that afternoon.  I was definitely tired when I went down, but getting up 2 hours later was like coming out of a coma.  I had no idea where I was or what I was doing there.  For my money, the California to Europe experience is still the toughest jet lag there is.  Groggy as could be, I made my way to the box and started shaking out the cobwebs… 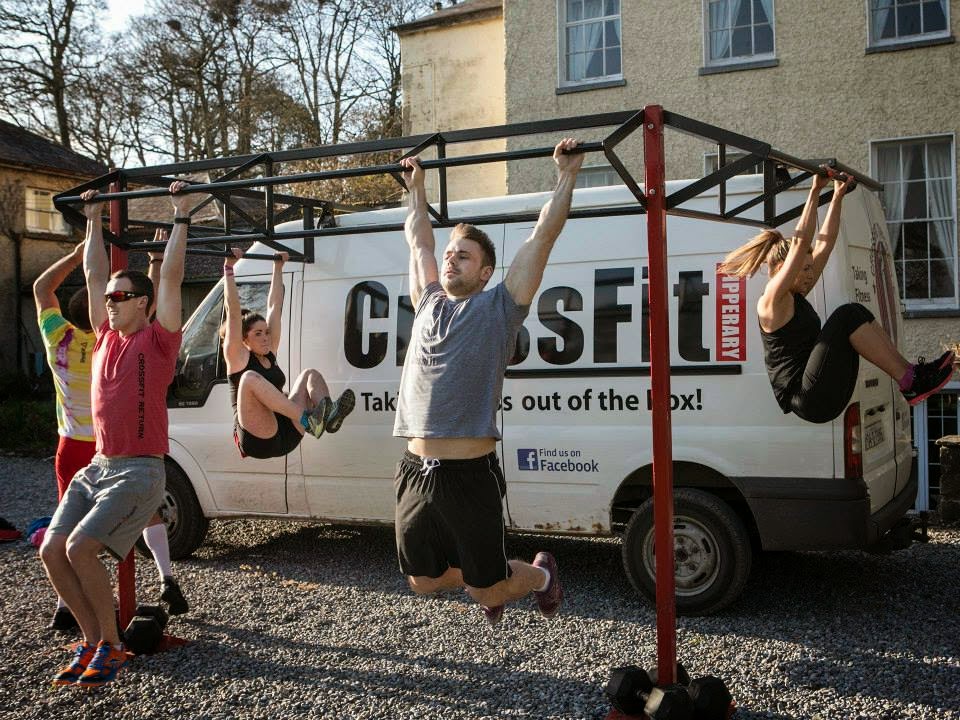 By the end of this my brain was back on track, just in time for everyone’s arrival.  We had a whole host of locals from Clonmel, a group of 6 from Cork, a few from Dublin, and one from Spain.  As usual, people that were strangers kind of stuck to their own packs at first.  But by the end of the weekend we’d all be close friends.

To introduce everyone to each other and the AWF experience, we headed out to the Clonacody House for our first workout of the trip.  Colin has rigged up an old van with pullup bars and support posts, so finding a spot to do a workout was as simple as finding a place to park.  We did so on the back grounds of the estate, setting up the following for everyone: 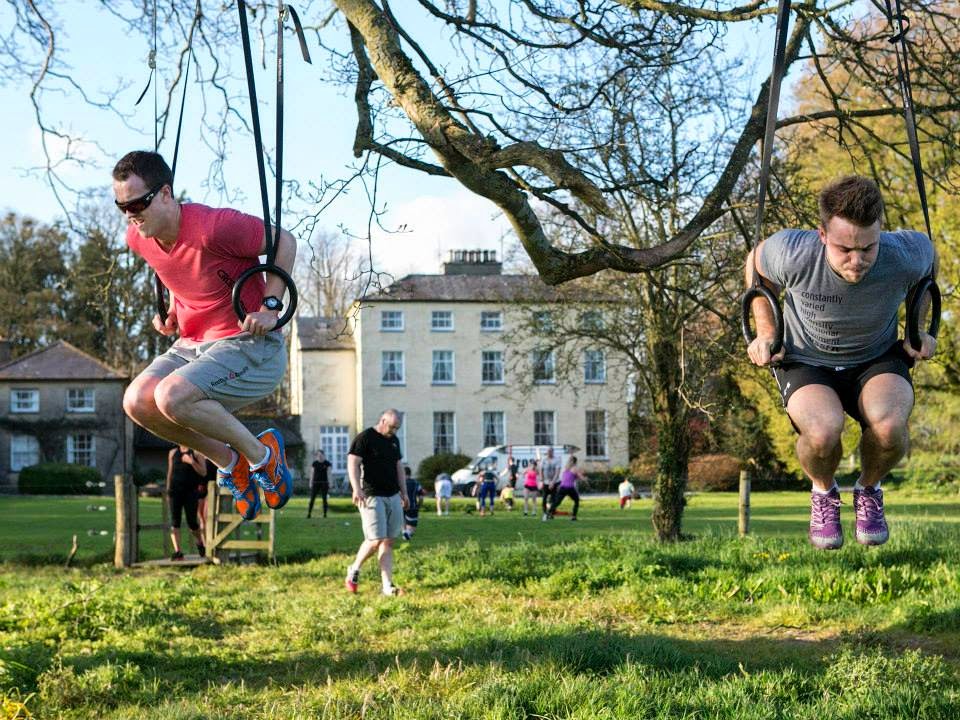 We set this up so that the toes to bar and ring dips were on opposite ends of a 50 meter stretch, that way the lunges were the way to transition from one exercise to another.  The rings we hung from an enormous and gorgeous oak tree looking out towards the mountains.  By 3 or 4 minutes in the moaning and groaning had started, as it is wont to do, but soon everyone found their groove and was able to continue through to the end.  Afterwards we went inside for soup and salad and had a round table discussion about programming, nutrition, recovery, and travel.  During the course of the workout and discussion, everyone became visibly more at ease with one another and began to open up.  This is always a good sign so early in a trip.  Beyond that, however, the discussion itself was really, really interesting.  People were raising questions about everything from supplementation to recovery cycles.  We even talked about the difference between motivating forces for competitors and those seeking health and wellness.  It was probably the easiest and most enjoyable open forum I can remember.

Most everybody was ready to call it a night after that, but a few of us ventured into town for some late dinner.  Not much open on Good Friday in Ireland, but we were able to snag a table at a local Indian restaurant that proved delicious enough.  The plan for the morning was to be up early enough for breakfast and to be at the box by 9:00 to train.  After that, we would be hitting the road!!!
Posted by anywherefit at 5:13 PM