Workout of the Day
WOD 1 – in the morning…
5 km sea cliff hike
Headstand/handstand practice
WOD 2 – in the afternoon…
3 minute AMRAP:
In teams of 8-9, pull the 16 ton bus for distance
Day 3 brought with it some traditionally Icelandic weather, the first of this trip.  Gray skies, misty air, and the occasional drizzle set the stage appropriately for a “highlander” like experience on the cliffs.  Originally we had planned to walk the trail from east to west, finishing at the bird cliffs overlooking the westernmost point in Europe.  But because the fog had crept in so thick overnight, we decided to start at the coast instead, and work our way back towards the approaching clouds.  This turned out to be a good decision because it afforded us clear views of the more than 400 meter drop to the sea below.  This was made more unnerving by the stories of tourists who had fallen to their deaths by crowding too close to the edge.  Locals have gone so far as to spray paint a line along the border of the cliff to encourage a safe viewing distance for foreigners.
We climbed higher and higher along the bluffs until we caught up with the fog and could no longer see the ocean below.  This experience felt akin to how I imagine some ancient Viking life to have been, trekking inland from the sea in search of villages to sack.  But instead of raping and pillaging, our party was content to stand on our heads and hands in the middle of the marsh beside the cliffs.  Taking advantage of the spongy moss, we were 26 upside-down bodies fighting the wind and rain to balance.  Quite the spectacle for the walkers outside our party, I imagine. 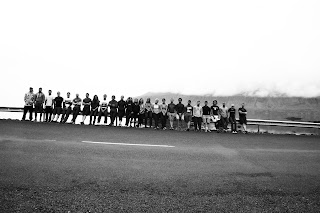 After taking lunch at a nearby campsite, we drove away from the cliffs and made an unscheduled stop at an abandoned airfield.  Here we etched what will undoubtedly be one of the more indelible memories of this trip: 8-9 people at a time towing the 16 ton bus down the empty airstrip.  Cool doesn’t begin to describe this WOD.  We were 3 teams, evenly distributed by weight so as to keep the pulls closely competitive.  The goal was to pull the bus as far as possible in 3 minutes, but we really had no idea what distance was possible.  Team 1 had a slow start and only was able to move the bus 100 meters or so.  This made teams 2 and 3 a little more nervous to get on the rope, having watched the agony of the first group.  Team 2 refined the technique, however, and got the bus moving at a faster speed than Team 1, utilizing momentum and almost doubling the distance first achieved.  That left only Team 3, down a man due to odd numbers and a little lighter than the other two, but certainly motivated to overcome.  As team 2 before them, team 3 got the speed up early and was able to maintain it through the end, taking the top distance by about 50 meters when all was said and done.  For only 3 minutes of effort, the level of fatigue and exertion was pretty impressive.  But more memorable was the scenery and camaraderie of the moment.  In the middle of nowhere, with nothing but wind and grass and sheep around us, 26 strangers willing to work, sweat, and laugh together at a moment’s notice.  This gives me a great appreciation for those who decided to join this trip, and an even greater anticipation for what’s in store the rest of the way.
Posted by anywherefit at 2:03 PM