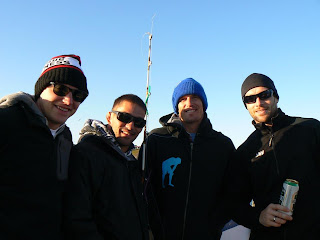 Day 9 was our last official training day of the trip because day 10 would be spent mostly on the bus driving the 6+ hours back to Reykjavik.  Everyone was feeling decently recovered from the run a few days before, at least enough to pull the barbells out and throw some weight around.  We set up shop in the dirt parking lot just outside the ski lodge, putting our feet towards the long canyon overlooking the fjord.  We could see the swamp soccer tournament already beginning off in the distance and used it as motivation to intimidate our opponents.  Not sure if that happened or not, but it was fun to imagine them looking up at 26 crazy people with their shirts off dropping weights and screaming and wonder what they must think.
More than a few people PR’d during the pressing portion… I was not one of them.  I only made it to 80 kg before tapping out.  By far the best part of this workout was watching everyone grit their way through the AMRAP jerks.  By the end of each set you can barely keep the bar in a front rack, let alone stabilize it overhead, but people kept trying.  I was forced to start dropping into full depth split jerks at 135#, just to give you an idea of the muscle fatigue that was happening.  As we were putting the weights away and heading down to the soccer fields, I felt like I had just done an old school chest and tri’s superset back in the day.  Everything was so full of blood and pumped out that we must’ve looked like the biggest bunch of muscle heads to the rest of the teams.
But soon the beer started flowing and all auspices of fitness and health were long forgotten.  All there was in the world at that moment was mud, soccer, and winning.  It’s a funny thing to watch people transform under the influence of team sports.  And let me be clear, this was not your average soccer match.  The mud was knee deep at the shallowest, the field was only 30 yards long, and physical contact was strongly encouraged.  People were flat out tackling each other, then trying to kick the ball.  There were scrums, melees, and mud flung in faces.  The requirements of the game were hard core, and with alcohol as an aid, people weren’t holding back.  At the same time, putting out so much effort in what was essentially quicksand is downright exhausting.  You’re good for maybe 1- 2 minutes of decently functional time before you need to get a sub.  Otherwise your dead tired ass is just a liability.
Our group was divided into 2 teams, men and women.  Our men’s team had the advantage of numbers, giving us more reserve players than our women.  Unfortunately for them, this was the way our demographics worked out and they just had to work a little harder.  The first game was definitely a learning experience with a few key takeaways: 1) socks and shoes do not work in deep mud.  You either go barefoot and lace the shoes up as tight as possible or you ditch the shoes entirely and get caveman on it.  2) two people need to stay up on offense while the other 4 fight like hell on defense and get constantly rotated.  3) you must obstruct the goalie.  4) hit first, then kick.  Picking up these bits of strategic wisdom along the way, we went from a 0-0 tie our first game to a 2-0 victory the second and a 2-2 tie in the 3rd (a last second miracle goal from being a 2-1 win).  This was enough for us to win our heat and set up a good draw for the following days championship rounds.
Unfortunately (or fortunately) we were heading home early the next day so we had to forfeit our placing.  Not that anyone really cared much, the day itself had been worth the time and effort in spades.  Imagine being caked in some dried, some still dripping mud from head to toe, so much so that you can’t see a dot of clean skin anywhere on your body.  Now imagine 1000 people like that in one place.  Then add beer, music, and costumes.  It was pretty unreal.  Later that night we headed downtown for a bonfire and fireworks with the rest of the town.  There was live music playing at a few of the local pubs and a few in our group didn’t make it back to the lodge til well past 5 am.  Not a problem when you have 6 hours on a bus the next day to sleep it off. 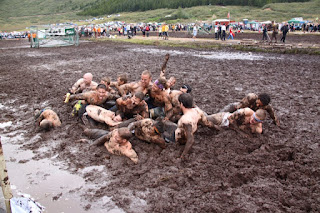 When we made it back to Reykjavik Sunday night, we all went out for one last dinner together.  There was constant chatter and laughter about the things that had happened the past 10 days, but also a sense of sadness that this group that had grown so close would have to leave each other the following morning.  I overheard a few say they were ready to book their tickets for the Buenos Aires trip in 6 months that night!  From my perspective, I couldn’t have been happier with how this trip turned out.  The personalities that came together were so complimentary to each other that everything seemed easy.  The things we saw and did were always connected by elements of challenge and beauty, perhaps the two most insoluble qualities that Iceland represents.  The success here for a second year offers nothing but promise for the future of these adventures, a future that begins in less that 2 weeks when a new group will land in Munich.  For those of you who made this trip possible, thank you!  For those who want to be a part of the next one, you won’t be disappointed.
Posted by anywherefit at 5:15 PM