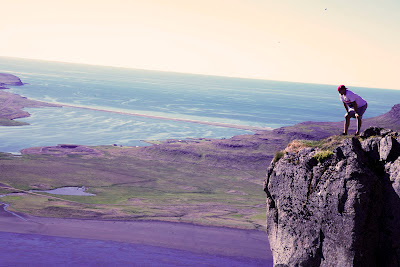 Workout of the Day
17 kilometer sea kayak
Day 6 saw us testing our fitness on the open water of Isafjordur.  Without much experience in our group, everyone was paying very close attention to the instructions of our guides.  Near freezing water temperatures and moderate wind conditions weren’t exactly comforting conditions for the uninitiated.  Still, people didn’t seem overly nervous, just anxious and excited.  The plan was to kayak 8 km across the fjord to the island of Vigur for lunch and coffee, spend some time there warming up, then paddle back.  The whole adventure was expected to take 6 hours.
The paddle across was a decent challenge due to the wind and current—both were directly into us so we were constantly having to overcome them with our strokes.  Dan and I were sharing a tandem kayak, so our communication had to be on point in order to sync our paddles and keep our nose in the right direction.  Another issue was the wetness. All of us were equipped with wet skirts to keep the water out of our boats, but these proved no match for the choppy waves.  We were all soaked by the time we reached the halfway point, leaving everyone wet, cold, and a little disgruntled.  The worst part was the anticipation of having to hop back in and do it all over again.
Luckily for us, the island family had lots of coffee and cakes ready for us.  And believe me, when you’re cold and wet there’s nothing like sweet baked goods to pick up your spirits.  We mowed them down in a way that would make Little Debbie proud.  The poor girls in charge of feeding us were scrambling back and forth between the buildings trying to find more bread, cookies, and pies because everything was eaten as soon it hit the counter.
Finally we rallied ourselves back to the boats and began the paddle along the coast of the island before turning towards the mainland for the final 5k.  Here’s where things got dicey.  The winds had gone from moderate to heavy and the waves from small to large.  As soon as we were away from the shelter of the island we found ourselves smack in the middle of a situation that none of us were equipped to handle.  We were a pack of 26, frantically corralled by 6 guides, trying to learn on the fly how best to stabilize small slabs of fiberglass in severely choppy wave.  Tense doesn’t begin to describe the mental state we were in as a group.  Every few minutes you’d hear some call out, ‘Man down!’, signaling to the guides that one of our party had capsized and was in need of assistance.  We were taking waves on from the side, from the back, and pretty much at every angle you can imagine, each requiring a different bracing technique to keep the boat from tipping.  And because people were tipping so often, we spent a great deal of time waiting against the waves without moving any closer to shore.  It was literally 2 hours of constant focus and attention without lapse, every stroke expecting to be tossed over.  It was probably the most intense group situation I’ve ever been in.

Finally we made it to shore, everyone hugging and laughing at how crazy the “calm kayak” trip turned out to be.  Even the guides were high fiving the group and showing visible relief.  This was one of those activities that went way beyond people’s physical limits and tested their mental toughness as well.  I could tell that having gone through it together, everyone in this group felt closer to one another.  Perfect timing as we turn towards the back half of the trip.
Posted by anywherefit at 10:50 PM