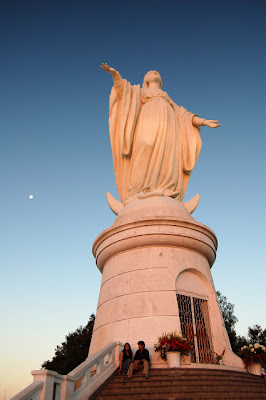 Everyone awoke eagerly Saturday morning to go explore Santiago.  After being trapped on the bus for the majority of the day Friday, nothing sounded better than open space and freedom to move.

On the agenda was a hike up Mount San Cristobal, the large peak at the center of the city where the famous statue of the Virgin Mary overlooks all.  In total, the distance to the top is said to be 5.5 km, but really that seems to be an estimate at best.  Nowhere did we see any signs or markers to indicate exact distances, only park officials giving us shaky hand gestures and educated guesses.  All the better, this would be a mental WOD as well.

As we approached the initial climb, a suggestion rang out from among the group that we should run the hill.  Then another that we should carry each other instead.  Sven and I looked at each other for a second and quickly agreed that this was an excellent idea.  A 5km buddy carry uphill would be an unforgettable challenge.

So, with the gauntlet laid down, the group partnered up and set off.  As we started I couldn’t help but think back to the 2011 Iceland trip where we partner carried each other to the top of the largest volcano crater in Europe.  One distinct difference made itself apparent, however.  The heat.  It was damn near 90 degrees farenheit during this climb, making bodies a lot more slippery than they had been in the volcanic version of this WOD.  Another difference was the distance.  While the grade was significantly less steep than in Iceland, the San Cristobal climb seemed to stretch on forever.  I think every team was in the lead at some point during the climb as people seemed to get sporadic bursts of energy, then just as sporadically fade to the rear.  All kinds of techniques were employed, both in method of carry and in intervals of work.  In all, we were working for what turned out to be over an hour. 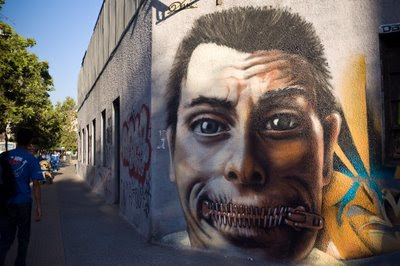 Of course, the view from the top was worth the wait.  We were blessed with an impossibly clear day so the entire city stretched before us like an architectural model.  The city is flanked by the Andes on one side and the Pacific Ocean on the other, but the mileage between the two is vast.  This metropolis is seriously enormous.  We made our way down the mountain slowly, stopping for a shower in the oscillating sprinkler system halfway down.  This relief was quickly evaporated in the heat, and by the time we reached our lunch on Pio Nono, everyone was bone dry.

An unmistakable characteristic of Santiago is the art.  Everywhere we walked there was vibrant graffiti, light projections on the water and walls, and a very distinct artistic energy.  Even on the subway trains. Saturday evening we attempted to find some live music during dinner in an area of the city known as Bella Vista, but discovered the venue we sought only opened after 11:00pm.  Still, walking through the streets of this neighborhood was a window into the bohemian life that exists there.  While not the most comforting of places at night, I could see it being a wonder of culture and art during the daytime. 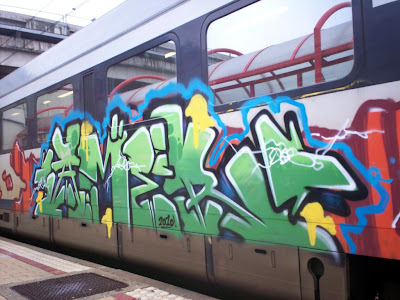 Instead, we wound up back on Pio Nono for dinner for what turned out to be arguably the best meal of the trip.  An in-house pianist served as a more than suitable replacement for the music we had been looking for earlier, and the menu was pretty incredible.  As tends to be the case in these trips, the unplanned events always trump the planned in enjoyment.
Posted by anywherefit at 8:46 PM