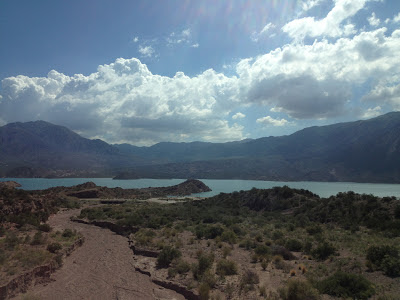 Today was the day we crossed the Andes.  As a mountain lover and secret lover of geographical landmarks, I was really looking forward to this part of the trip.  A run at high altitude in one of the most famous mountain ranges in the world had awesome written all over it.  However, life had other plans.

Our drivers arrived an hour late to the hotel for pickup in the morning, setting us back a bit on our schedule.  But hey, no big deal.  We still have a large chunk of the day ahead of us to get done what we need to get done.  While heading through the pass we are informed that the customs office at the Chilean border closes at 4:00pm and if we didn’t make it by then they were going to turn us around.  That meant we couldn’t risk doing the run in Argentina.  Instead we arrived at the customs line at 2:30 and didn’t get processed until after 5.  Frustrating, but necessary.

As we passed into Chile we immediately entered a construction zone with 5 mph traffic.  Our drivers informed us that it would be impossible for the bus to stop to let us out until we were through the construction and near a wider shoulder.  Here’s where I began to worry because the light was starting to fade and we had already passed the highest of the peaks.  Over an hour later we were through the construction but the mountains were behind us and it was dusk. 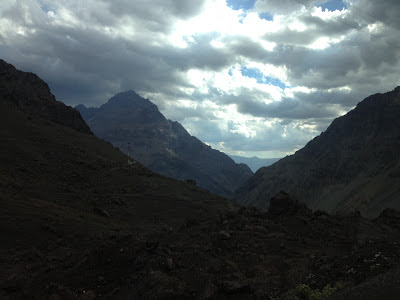 Finally, I had had enough and told the drivers to just pull over where we were.  From that point everybody was instructed to run 20 minutes up the road to whatever distance they could cover, turn around, and run back.  In spite of the circumstances, this turned out to be a great run.  Sunset over the hills and a summer breeze definitely helped to ease the tension of a tough day trapped on the bus.

Overall, today was a lesson in patience more than anything else.  When things don’t go according to plan and are out of your control, sometimes it’s difficult to accept the alternative.  The good news is that we are in Chile and have 3 nights and 2 days more ahead of us.
Posted by anywherefit at 9:30 PM