The morning of day 3 everyone was still buzzing from the night before.  But between the soccer match and Matt’s birthday celebration, there was some alcohol to be sweated out.  We took to a different park in the city to attempt some lifting using partners as resistance.  I’d never done zercher squats or good mornings with a person before… challenging on both parts.  If the person being carried really hold on tight the zercher squats actually feel pretty comfortable balance-wise.  Imagine a husband carrying his wife then squatting her 10 times and you’ll get the picture.  Then imagine his bride is a 100 kg Englishman and you’ll be in my shoes. 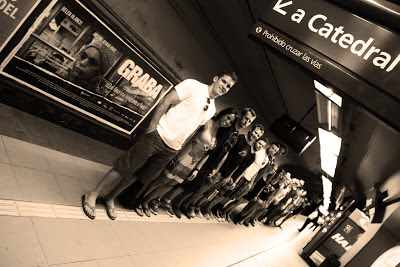 We tried a couple different loading variations for the good mornings, but decided that the fireman carry was the best placement.  One arm under a leg and the other arm under an arm, again with the most important aspect being the carried person’s ability to hold on tight.  Both of these exercises are a challenge whether you’re lifting or being lifted.

We followed it up with a bodyweight relay to finish things off.  The wrinkle in this relay was that each leg required people to travel down 10 steps, around a bend, then back up a different 10 steps.  Our reasoning for including the stairs was to increase the coordination demand during crawls and jumps.  It would also necessarily slow people down and force the workout to last longer, giving us the needed time in the heat to sweat out the toxins.  This turned out to be really grueling!  It kept getting hotter and hotter as the workout wore on, and the jumping sets in particular were a real challenge.  Turns out nobody really practices jumping backwards.  Go figure.  During the authorized rest periods (the time you were waiting for your teammates to finish their legs of the relay) people were seeking out the shady areas to hold planks, squats, and leg raises.  By the end, all teams were soaking wet and spread out across the grass. 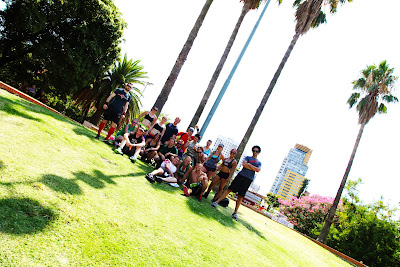 With a great workout in our wake, the entire group headed into San Telmo for the afternoon to enjoy one of the world’s biggest street markets.  To get there, we did what every traveler must do—sample the local public transport system.  After a short walk, the entire group descended into the tunnels beneath the city and boarded the subway train for the city center.  I have to say I was pretty impressed with the condition everything was in.  Even though everything here is exceedingly hot, the air in the tunnel wasn’t uncomfortable.  The system was easy to understand so any fears of getting lost and popping up somewhere in the slums of Buenos Aires were quickly put to rest.

San Telmo is Buenos Aires “old district,” and used to be home to the city’s elite.  While most of the wealth has moved into La Recoletta, San Telmo still retains the history and charm of the old days, not to mention a market that stretches for miles.  No joke, we started walking from La Casa Rosada (Argentina’s equivalent of the white house, only pink) and didn’t stop for an hour.  There was live music, fresh barbeque, and more fedoras, sunglasses, and knives than I’ve ever seen in one place.  The demand for these items must be abnormally high in Buenos Aires because every third or fourth merchant was peddling them.  As in any foreign country, it was a cool and authentic experience to walk amongst and negotiate with some locals. 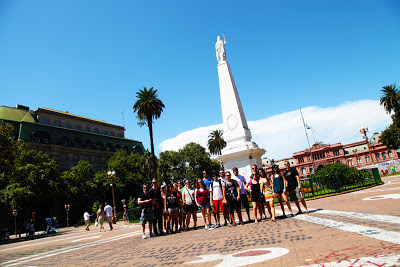 The original plan had us going back to Tuluka for a skill session in the evening, but by the time we got back from San Telmo I could tell everyone was pretty exhausted.  Instead, we went out to dinner just around the corner from our hotel and walked about Palermo for a few drinks before calling it a night.  I have to say that of all the areas we have explored in the city to this point, Palermo has the most appealing character for me.  It is covered by a canopy of tall trees, offering shade on almost every street.  There seems to be restaurants and bars at every corner, but not in the often obnoxious manner you’d expect from a city this size.  Places appear quaint and inviting, rather than loud and repellant.  Something about the architecture and greenery give this neighborhood an urban/tropical feel, similar to areas of New Orleans.  In short, I love it here and will be sad to leave in the morning.  Although I’m excited to explore more of Argentina, I know that we could spend all 10 days in Buenos Aires and still only have scratched the surface.
Posted by anywherefit at 3:38 AM