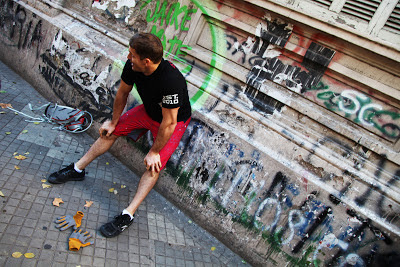 Day 5 turned out to be our best day of training yet, even though it also included the longest drive.  Our night in Rosario was very tame—the city itself was pretty dirty and didn’t seem so suitable for a major night out—and allowed everyone to get a good nights rest before hitting a workout early in the morning.  The location we chose was just to the side of a huge, derelict school for teachers.  Separating the street from the sidewalk was a dividing bar with two levels engineered to keep pedestrians from straying into the street while waiting for the bus.  For us it provided a perfect apparatus to climb under and over before muscling up the 7 foot ledge abutting the school.

The under/over portion of the WOD required a fair bit of skill and technique.  As one watched others progress through the workout you could see their technique improving, evidence that they were learning how best to accomplish the task.  This is the biggest reason to do workouts that don’t involve barbells, the skill set needed is infinitely more unpredictable.

Because we were so many and we didn’t want to take up too much space at once, we ran the WOD in heats of 3.  This also created a cool spectator experience for those of us waiting our turn.  The locals passing by and boarding the busses were treated to a noisy morning in the street, as 3 by 3, 21 crossfitters created a training playground out of ordinary objects. 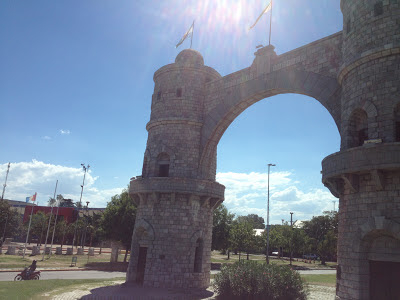 The novelty of the WOD made it special, but the intensity made it legitimate.  Any time the workout lasts 3 minutes or less it’s like you are given permission to go full speed without consequence.  That’s what we saw this morning: everyone going balls to the wall for 3 minutes without fear of not finishing the workout.  I, for one, was crushed at the end. I completed 24 rounds of the workout and needed a solid dousing of water to assuage the headache that was fast approaching.  Erik Hayes also finished 24 rounds, only he made it look a lot easier than I did.

We covered 400 kilometers in the bus on the road to Cordoba, crossing mostly plains and crops.  If it weren’t for the comfort of the bus, the drive itself would be tough to stand with so little to look at.  As it is, people are just racking out and watching movies.  After arriving and checking into our hotel I discovered that because it was the 2nd day of carnaval nothing was open.  We had originally intended to drop into a Globo Gym for a heavy lift, but plans had to be altered.  The hotel clerk offered the hotel’s gym up as an alternative so we went up to check it out.  There were two bars, neither of which were Olympic size.  Actually, they looked more like a bar you’d find in someone’s garage; the ones with the plates that have really small holes and no collars.  Ingenious adapters that we are, we decided to run the strength WOD in heats of 4 every 30 minutes, therefore cycling everyone through the 150 square foot facility in a little over 2 hours.  There was no squat rack so we loaded the weights on the bar and hoisted it up for each lifter.  To avoid unnecessary lifting we organized the heats by comparable strength. 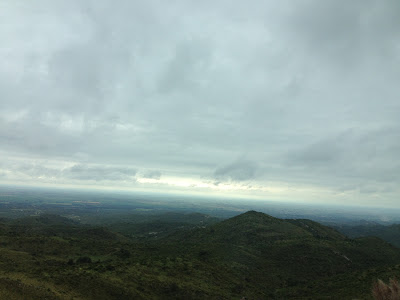 Man, if this didn’t turn out to be an awesome workout!!!  Antiquated equipment, rooftop of a hotel at sunset, and a broken air conditioner.  Needless to say it got real gritty during this one, but everyone loved it.  The 3 second pause squats were a great technique enforcer for those with depth issues and the sumo deadlifts a perfect assistance finisher.  I expect the group to be sore and happy in the morning from this.

For dinner we shot down the street to a local restaurant and were served what appears to be a customary argentine platter of meat, being that we’ve received similar variations of it the past 3 nights.  Steak, blood pudding, chicken, pork, sausage, intestine, and ribs.  Add some fries and salad on the side and there you have it.  With the exception of the intestine, this has been consistently delicious.  Just that bit is a little chewy and hard to get down.

Tomorrow we leave for Mendoza, a whopping 600 kilometers to the southwest.  We should finally get out of the flatlands and see some true South American terrain, as well as make a pit stop for a swimming WOD a little over halfway.  After tonight’s lifting, I think that’s exactly what we need.

Posted by anywherefit at 4:01 AM