Having a walk around Salzburg on the morning of day 5 was probably the best kept secret of the entire trip.  I had intended this detour to break up the drive from Munich to Vienna, but it turned out that it went way beyond expectations.  The place is literally carved out of the mountains, so that wherever you look you can see rock towering above the buildings.  The architecture and layout were quaint and endearing, the streets tightly lined with restaurants, pubs, and tourist shops.  The river between the old town and new town was cris-crossed with bridges and everything was impossibly clean and tidy.  The old town was maze-like in it’s construction, with small tunnels and alleys cutting through and under the large buildings to connect thoroughfares.  The streets were bustling with markets and musicians and it seemed everywhere one looked there was something to see.

We made our way to the medieval fortress that sits high above the town via a near vertical train.  Once inside, it was like stepping back in time.  The museums were filled with ancient weapons, instruments of torture, and decorative artifacts from 1000 years prior.  The state rooms were maintained as they used to be, with original wood beams, cracking tile, and gilded paint throughout.  I’m having a hard time remembering if I’ve ever seen a castle preserved in this way.  Typically you’ll see rooms re-created as they were, rather than maintained in original form.  It’s a different feel entirely.  Naturally, the view was phenomenal.  360 degrees of mountains, forest, and fertile valley.

It didn’t take long to get the group motivated to do a WOD in these surroundings, so we headed to the main courtyard and did the sequence described above.  This was surprisingly kind of a gasser.  The burpees jacked the heart rate right away and because it’s only 1 minute of work you really can’t justify slowing down at all.  Going from that straight into box jumps (done on a 3 foot stone ledge) was a little dicey.  I clipped my toe on the 3rd round and have a nice shin gash to prove it.  And then throwing yourself upside down repeatedly on the handstands never really allowed me to settle into a rhythm.  Couple all that with the fact that we were in an ancient stone fortress and we had ourselves a kickass morning workout.

The next few hours were everyone’s to grab lunch and make their way back to our hotel where the bus was waiting to take us on to Vienna.  The plan from there would be to hit a heavy WOD at CF Vienna, then take in a film festival at City Hall that night.  Everyone was pretty excited to check out another CrossFit box since we hadn’t lifted any real weight since the first day of the trip, so the Deadlift/Floor Press/Front Squat total really hit the spot.  The gym itself was right downtown, off a main avenue a few blocks from the city center.  You walk in to what feels like an upscale apartment complex with marble staircases and wooden banisters before heading down to the basement.  Here things get gritty.  No windows, no ventilation, just sweat, dirt, and iron.  The workout space wasn’t more than 1000 square feet, but it had additional rooms for changing, storage, and showers.  Everyone immediately fell in love.  We carved out a little corner where we could do our thing and not impede the progress of the WOD already taking place, quickly organized ourselves into stations, and started getting after it.  15 minutes each station to establish our 1RM, for some their first at these movements.  I partnered up with AWF veteran Paul Frick for all 3 lifts, and watched him PR his deadlift and his front squat by nearly 20# each!  And the deadlift was just a few lbs shy of 500, a number that I know he’d have pulled if we’d had more time.  I watched Jeff Binek front squat 160 kg and make it look easy.  People were soaking through their shirts, screaming through their reps, and cheering each other on as though they’d known one another for years.  It was great to see.  My numbers were DL-210 kg, Floor Press-140 kg, Front Squat-140 kg. 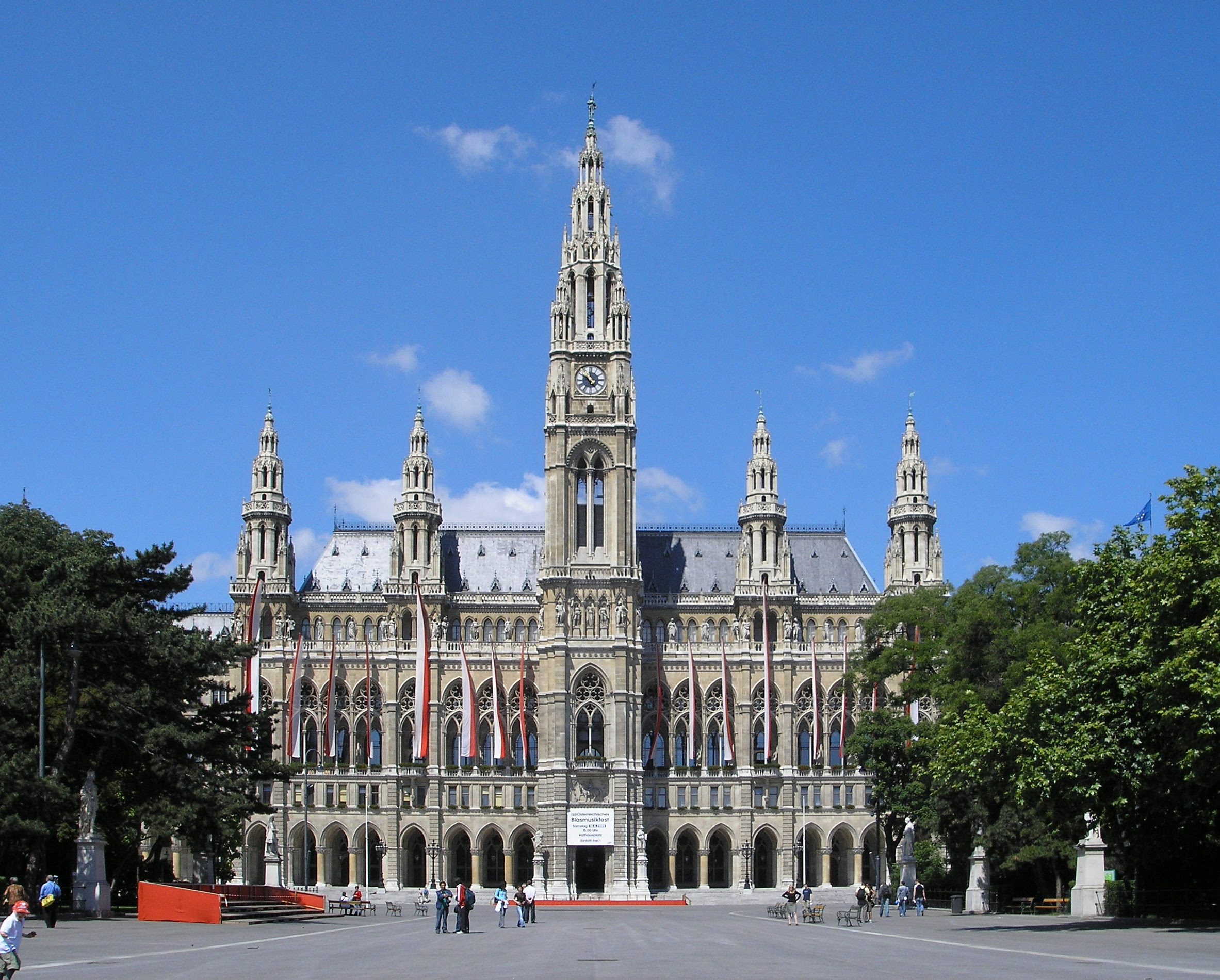 After showering up we all walked down to City Hall for the film festival, essentially an enormous projection screen set up in front of stadium seating and hundreds of portable chairs in town square.  Around it dozens of vendors were selling food and drinks, making this a straight up party for the evening movie go-er.  The only hiccup was that the showing was a 70’s German opera that appeared to be more of a comedy than anything else.  None of us could really understand what was going on and I found it hard to focus on anything other than the ridiculous costumes and set.  But the experience was cool nonetheless, and the food was delicious.  I was already in love with Vienna after being there not more than 3 hours.  Lucky for me it would lonely get better.
Posted by anywherefit at 5:45 AM