Partner WOD (all movements done by each partner) 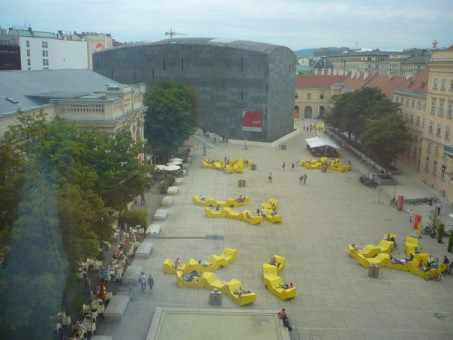 Day 6 began at Vienna’s Museum Square, a courtyard where 4 of the city’s museums were placed.  Definitely a place begging for a workout.  In the center of the square was a network of walkways and benches where patrons could sit and drink coffee or chat with friends.  We decided to use the circumference of this network as our track.  We quickly paired up into partnerships of similar weight and started moving. John and I were partnered up like old times, so it was an especially fun workout.  This workout was very cool, but also much more difficult than expected.  Right off the bat going from carries to step ups was pretty brutal.  I remembered from an old WOD where I had to carry a partner up a flight of stairs how difficult that could be, but I was still surprised by how tired my legs got.  And the secret killer during all these movements was being the one that was carried.  It’s not a break when you’re fighting to keep someone’s shoulders and elbows from knocking the wind out of you.

After going around the square for the piggy back carry we began our sexy situps—such a cool exercise!  I have to give Sven all the credit here because I’d never seen or imagined this exercise before.  But it was a LOT like a GHD situp.  As with everything else, the static person was working almost as hard as the moving person.  Holding your balance while another of your same weight is bending and pulling on you is tough.  If you try this with somebody else, be sure to really sit back and almost create a shelf for the one doing situps with your knees.  Otherwise they’re going to take you down.
Happy to report that when all was said and done John and I had finished the fastest of the group, a fact we were happy to report to Icelanders Sven and Hilmar.  After everyone had finished we split up for the afternoon to walk around town, check out museums, and get caught up on things back home.  I chose to go into the Leopold Museum, home of 20th century art including a few works by Gustav Klimpt.  Although it was cool walking around and appreciating art and history as it always is, I wasn’t impressed with this museum.  The main theme was “From Expressionism to Objectivism,” leading me to believe I prefer Expressionism.

Following the museum a small group of us caught the train to Schobrunn, the Versailles of Austria.  This place was magnificent.  Impossibly huge and grandiose, the outer walls stretched close to 2 miles in length.  Once inside those walls I couldn’t believe the garden I was beholding.  Huge fountains and ponds, Romanesque structures with columns and statues, colorful flora stretching everywhere, labyrinths, zoos, you name it.  The place was massive and filled with more things to see than an afternoon could hold.  Because this place was so cool, I decided to bring the entire group back the following morning before departing for Prague.  Everyone agreed it was worth the trip.
For our last night in Vienna, Sebastian suggested we head to the river for dinner.  The place we chose had sort of a beach theme, which vibed surprisingly well with the urban surroundings of graffiti, traffic, and elevated trains.  The entire group sat at a single long table and shared stories, drinks, and laughs until late into the night.  At this point I could really feel the bonds between us getting tighter, just as they had during the Iceland trip a month earlier.  It was a great night and a great sign for what was to come in Prague.
Posted by anywherefit at 2:24 AM