Muscle Up and Tumbling Skill session 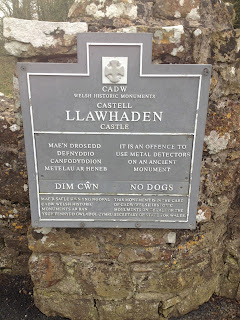 Day 2 kicked off early, all of hitting a proper Welsh breakfast at 8:00 am at the resort's main restaurant. Filled and happy are two words to describe the group's sentiments as we were walking out to the bus afterwards, but that would only be built on as the day wore on.  Our first stop of the day was Llawhaden Castle, just 30 minutes west of Bluestone.  We were the only tourists onsite, so we had the place to ourselves.  Perfect situation to hang some rings and work on muscle ups with everyone.  Because the group was so big, we broke it into halves and let one group work on handstands and tumbling while the other hit the rings.  Doing this type of thing in an ancient castle made it that much more special, and a few people ten set some personal records.  1st muscle ups, 1st handstand hold, furthest ever walked on hands, muddiest fingernails, etc.  At the end we even had everyone give a go at max consecutive muscle ups, during which I set my own PR at 13.

After about an hour and change we moved on to the second location, Freshwater West.  This is an enormous stretch of coast and beach that we used for our day's strength session.  Warming up by carrying 600 kg of bumpers and bars over the dunes to the beach, everyone was more than ready to get lifting.  Getting used to the footing was a bit of a challenge for most of us, but after awhile people were starting to lift comparable weights to what they did in the gym.  We didn't bring any smaller denominations than 10 kg plates so our options for totals were limited, but the majority of our group were able to sync up with a decent amount of load. 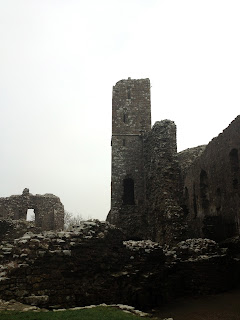 After finishing the EMOTM sequence we went straight into hang cleans + jerks and then into the front squats.  I love squatting in the sand, personally.  It allows you to position your feet at any angle so mobility isn't as much of an issue, while at the same time forcing you to really focus on controlling your footing.  We were lucky all day with the weather, only adding to the setting we were lucky enough to find ourselves in. 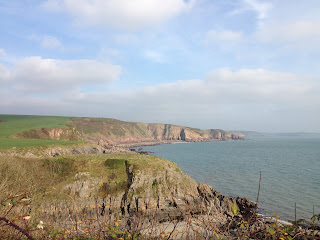 We ate lunch in the car park just off the beach, everyone ready to refill their muscle stores before the final WOD of the day.  For this last sequence we headed to Barafundle Bay, voted the most beautiful beach in Europe.  Hiking from the bus to the beach didn't prepare us for what we were walking into.  Across impossibly green pastures and rolling hills we could see the ocean and cliffs where we  were headed.  But it wasn't until we were within a hundred yards that we saw the wall separating the grass from the beach.  The stones looked centuries old and were jagged across the top like a medieval fortress.  After passing through a small doorway in the wall we could see the sheltered cove far below.  It was breathtakingly secluded and beautiful.  Walking down the long stairs to the sand I could hear each person's exclamation behind me as they passed through the wall one by one.

For the workout we marked a 100 meter course across the beach and stretched along it until we were shoulder to shoulder.  As the intervals began, it was quickly clear that we were in for a tough road.  The sand, though firm on top, was nothing more than a soft center covered by a hard crust.  As soon as we took real strides our feet were sinking and our legs fighting to overcome the deficit.  After round 4, people were really hurting, but having the halfway mark in sight pushed everyone to continue.  For me, it was the promise of a cold dip in the ocean to cool down afterwards. 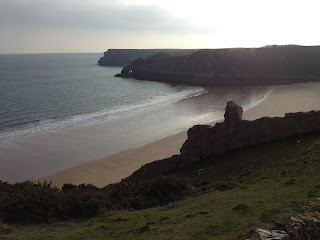 Walking up the stairs and away from Barafundle after the workout I was first exhausted, but also so impressed with the beauty Wales has to offer on a clear day.  That beach is definitely among the most gorgeous I have ever seen and I can only imagine how much better it would be in late summer/early fall.

To celebrate the day, we took to the town of Temby and enjoyed a few beers at the pub while watching an English Premier League game.  It was a proper Welsh ending to the day.
Posted by anywherefit at 11:37 PM