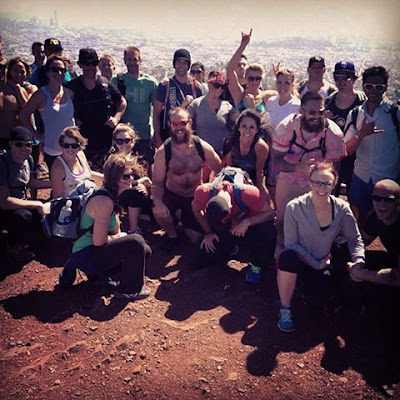 Saturday brought with it the much anticipated Urban Hike 2.0.  It'd been just under 2 years since Clint and I last took a group on the 7 mile trek from Stern Grove to the Marina, but all the landmarks felt fresh in my mind as we passed them.  The main difference this time around was that instead of having 12 or 15 people with us, now we were leading a crew of close to 40.  It was quite a sight watching that type of mob running up Twin Peaks, or crossing the street in the Haight, and traversing the network of logs in the Presidio.  But at the end of the day "the more the merrier" never proved more true.

The hike began, as I said, at Stern Grove Park in the Sunset District.  From there we wove our way along Portola and up to the base of Twin Peaks.  At this point everyone was good and warmed up (the majority of the walk was uphill) so we started running.  The first 1/2 - 3/4 mile of the run up Twin Peaks is paved, then it transitions to dirt trail and steepens dramatically for the final 1/4 mile.  This is a serious leg burner and a challenge to convince the body to keep running instead of slowing to a walk.  Once at the top we paused for pictures and to catch our breath before heading down the back side towards Bueno Vista. 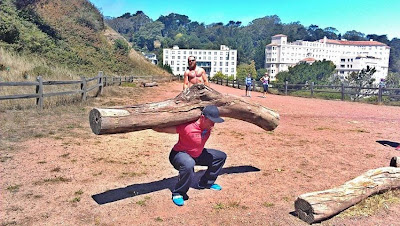 During this stretch we did some up and down stairs bear crawling, some log squatting, and a little freestyle object climbing.  No organized WODs, just having fun interacting with whatever we came across.

At this point we were at the halfway point of the hike and in the famed Haight-Ashbury neighborhood. Just as we did 2 years ago, we stopped in at Martin Mack's for lunch.  This turned into a 2 hour long, jukebox infused, beer-laden intermission that I won't soon forget.  We literally took over this place, and if the day had ended here it would have been enough. 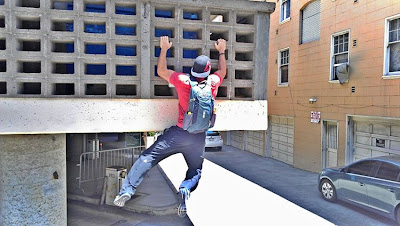 But we had another 3-4 miles to go, so we made our way back to the street and up through Presidio Heights.  There were a few impressive feats accomplished along the way, including John's incredible handstand walk up a narrow cement retaining wall alongside a church.  How he did this after our lunch break I will never know.

Eventually we made it to the Presidio and the welcome scent of Eucalyptus trees.  We wove our way through the network of fallen trunks and decided to take a quick break at the new CF San Francisco location just south of the Bay.  It's a whole new world down there since they moved out of the parking lot, let me tell you.  Very cool space with vaulted rafters and a series of sliding doors along the street.  When we got there, some members were hosting a small powerlifting competition, so we stuck around for a short while to observe and cheer them on.  But the end was in sight and we had to move on. 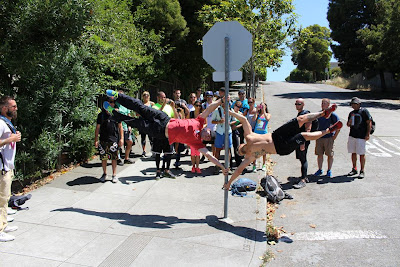 For the home stretch, we walked past the Palace of Fine Arts and into the Marina District, settling at Monahan's for beers and dinner.  All in all, a perfect kinda day.  There were some tough physical tests, some light-hearted breaks in the action, and a ton of like-minded people bent on enjoying themselves outdoors.  For an inside look at the hike, check out the video below, courtesy of Clint and Village Fitness Fair Oaks.