After a good night's rest everyone was ready to rock and roll Saturday morning.  We were up early and on the road just after 8:00, heading towards Lake Bled for the day.  Thanks to the guys from a href="https://www.facebook.com/pages/CFCELJE/312087588827267?hc_location=timeline">CFCE
we were met at the lake by 6 bars and 400 kg of bumper plates.  Nothing like a lakeside Oly session to kick off the trip!!! 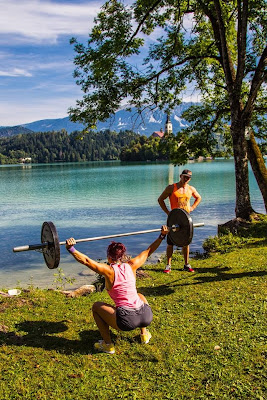 In groups according to strength we built up to our heaviest sets of the following complexes:  hang snatch+full snatch+oh squat, and hang clean+full clean+front squat.  As always in the case on these adventures, many people PR'd their lifts in spite of the uneven ground, slippery footing, etc.  The energy of the group and the momentum of the experience propelled them beyond what they could previously do.

Immediately after we stripped down and jumped in the lake for part 2 of the workout: 600 meter swim to island.  In the middle of Lake Bled there is a tiny island, home to a single church.  Our task was to swim the distance, climb the steps, and ring the bell.  To give everyone a proper appreciation for this scene, picture water that's bluer than blue, an island and church that look straight out of a fairy tale, and 30+ people paddling towards it at once.  Surreal doesn't begin to describe it.  The boat rental people must have been rubbing their eyes in disbelief.

Once we made it to the island (yes, we all made it), we spent a few minutes walking around and checking things out.  A few people went to the bell tower and made a wish as is custom, while the rest hung out in the courtyard and cooled off.  Then it was back in the water for the swim home.  As soon as we reached the other side we loaded everything up and headed into town for some lunch.  As has been the case thus far wherever we've eaten, the food was phenomenal.  Big portions, delicious choices, and reasonable prices all around.  Win. 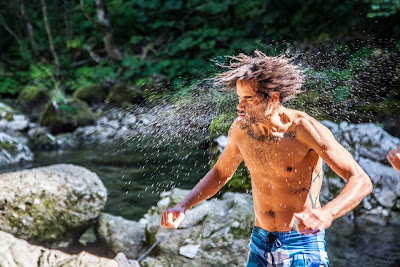 For our afternoon workout we headed toward Vintgar Canyon.  Some of the locals had recommended it as a place to see, but without much description of what exactly it was we were seeing.  Aside from taking the wrong path into the canyon (we ran an extra mile or so), what we saw was straight out of the Goonies.  The river had cut a very narrow and deep path through the rock and spilled its way over fall after fall until culminating in one final waterfall at the bottom.  All along this winding waterway, the park service has constructed a network of bridges and pathways built from wooden planks.  Every turn was more beautiful than the last.  At the bottom of the falls we took the opportunity to jump off the rocks and test the waters... which were freezing.  But so worth it.  This goes down as another in a long line of unintended gems. 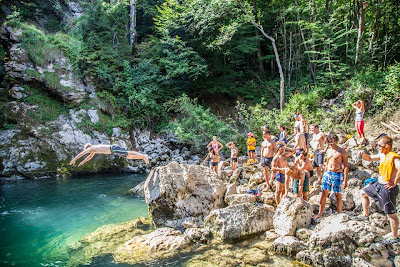 To cap off the night we ate a traditional Slovenian meal of mushroom soup, salad, and chicken cutlets w/ potatoes, then headed to Tivoli Park for a benefit concert.  DJ Umek was the performing act, I'd never heard of him but 20,000 Eastern Europeans seemed to know him pretty well.  For 3 hours we drank, chatted, and danced our way to from the front of the stage in what can only be described as a Ljubljana rave.  Thankfully no one went missing during this experience, but it turned out to be a lot of fun.

Needless to say everyone was wiped out by the end of this.  Max effort snatches and cleans, 1200 meter of swimming, a 5 mile hike through the land before time, and an all night rave downtown... what more can you fit in a day?

Posted by anywherefit at 8:52 PM