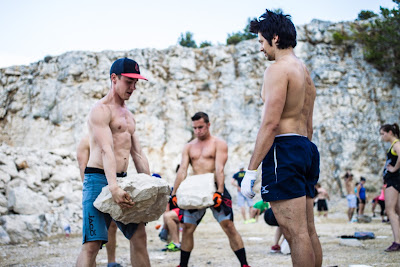 Day 4 began with a 20 minute yoga session, courtesy of Kimberly Wilson.  Everyone was still feeling the effects of the first few days so we thought a good stretch was the right call before hopping in the bus for the 3 hours it would take to arrive in Split.  Considering there were quite a few among us who had never done yoga before, this went surprisingly well.  Sun salutations, flipping your dog, a few warrior poses thrown in… and the group was feeling good and limber heading back on the road.

Our final destination for the day was Bol, a city on the island of Brac.  In order to get there we needed to hop on a ferry in Split (2nd largest city in Croatia) and ride it across the channel.  This gave us a little downtime in Split to walk around the harbor and explore the local vibe.  While definitely more industrial than Ljubljana, Split still felt relatively warm.  The locals there were not stand offish or rude, but seemed to welcome the tourist element as part of life there.  I took this opportunity to purchase some water shoes from a street vendor.  As a small group of us were negotiating prices on the shoes, we were observed by another portion of our group.  This got them thinking that maybe they too should get some water shoes.  After all, maybe I knew something they didn’t know…  Time would tell they were right. 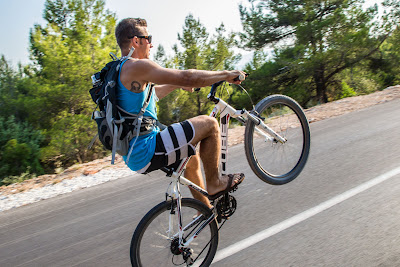 The ferry ride itself took less than an hour.  Once on the other side we began driving up over the top of the island in search of a good location to train.  Just past the crest of the peak we found such a place.  An old rock quarry just of the highway caught our eye and we convinced the bus driver it was safe enough to pull over.  In the quarry were piles and piles of indigenous rock, along with an enormous mound of slabbed marble in all different shapes.  The workout for the day was a Partner Diane, where each team had to complete 42 deadlifts, 42 handstand pushups, 30 deadlifts, 30 handstand pushups, and 18 deadlifts, 18 handstand pushups.  For the deadlifts each team had to find a rock of suitable size and weight—not necessarily easy to find the perfect shape—and then move it from ground to waist using all the same criteria for a typical deadlift.  For the handstand pushups, partners could spot each others legs and feet. 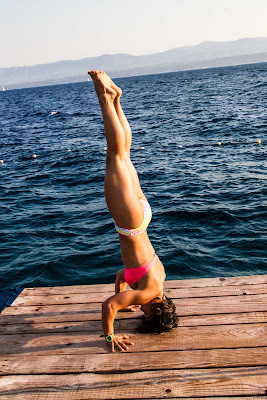 Sven and I teamed up for this one and found a rock that loosely resembled the “Africa Stone” that they used to use in World’s Strongest Man.  I found that gripping this thing was the biggest challenge of the workout.  Perhaps that’s the point of training this way: discovering the unintended obstacle.  We broke the sets up in 10’s and 11’s the first time through, 10’s and 5’s the second time through, and 9’s for the final.  There was no real “easy part” here, other than the rest you got while the other guy did deadlifts.  Even spotting the handstand pushups was tough because your shoulders were already tired from doing them yourself.

As everyone was finishing it was evident how much people enjoyed the workout from the huge smiles on their faces.  Before leaving we gathered up the stones and built them into a large monument with the letters “AWF 2013” in front of it.  We even found a chunk of an old column to balance on top.

Once down into Bol and all checked in to our apartments, we rented bikes for the group and set them loose on the town.  2 hours to ride and explore before reconvening for dinner.  Some rode all the way to neighboring towns, others hit the beach for some beers.  Denny, Kim, Uyen, Chris, Jenn, and I made our way to a secluded camp spot with a large island dock and took turns jumping off into the sea.  It was our first taste of the Adriatic and it was amazing!  The water is extremely salty, but so clear and blue that you can literally see to the bottom without goggles.  I would later decide that the reason for the saltiness is the types of rocks that line the coast here.  They are nearly porous from the erosion into the sea, making the water extremely dense with minerals like magnesium.  The benefit of this to the swimmer is that soaking in these waters is nearly the same as taking an Epsom Salt bath. 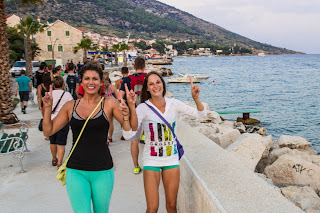 Once back with the group we took dinner at a place right on the harbor, where we ate skewered chicken and two types of Mediterranean sausage.  Again, amazing.  The food here has been incredible.  I will miss it when we’ve gone. Before heading to bed on Day 4, we set the stage for Day 5 by telling everyone only that we would be out from 8:30 am until after 5:00 pm.  What we’d be doing for those 8+ hours, remained a mystery.