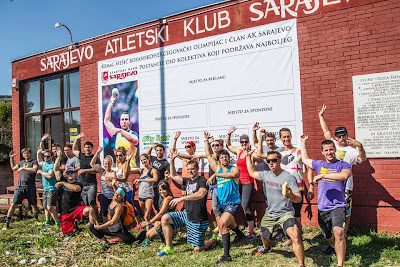 Waking up to the sound of an Islamic call to prayer was definitely a first for me.  But that’s daily life in Sarajevo.  Constructed alongside Serbian Orthodox and Catholic churches, there are more mosques in this city than in the capital of Saudi Arabia.  Religious diversity is just one example of the cultural variety the Bosnian capital boasts.  Walking through the old town you could see everything from Western Europe to the Middle East, all under the subtle veil of a war torn past.  To say that you can read the history on people’s faces is an understatement.  I wouldn’t go so far as to say people look overly unhappy, just very serious.  Not exactly surprising when you consider the city was under siege for close to 4 years.  During that time the only way to get people or supplies in and out was through a 1000 meter underground tunnel to the United Nations air strip.  Many of the people still living in the city spent their formative years in that type of environment. 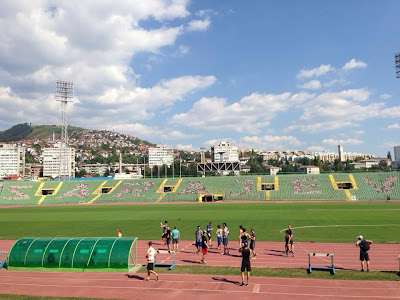 After visiting a few mosques and walking around the old city, our group headed out to the Olympic Stadium from the 1984 Winter Games.  Here we were set to meet Adi, the owner of the largest CrossFit training facility in Bosnia.  His gym is carved out of the old track and field training facility for the Yugoslavian national teams of the 1980’s.  Talk about a piece of history.  Entering the single story building, I couldn’t help but be reminded of every YouTube video I’ve seen of Russian and Bulgarian lifters.  Non-descript red cinder block walls, simple placards on doors denoting things like “Equipment Room,” and “Showers,” and the no frills feel of a place built to encourage hard work.  Adi led us to the end of the hall where his portion of the facility was located: 2 rooms, 2 squat racks, 2 benches, 4 olympic bars, a 3 person pullup system, a few strategically placed rubber mats, some nautilus rehab equipment, and a classic set of wooden stretching bars mounted to the wall.  Perfect.

After a warm up out on the track that included some running and some pigeon to pigeon transitions, we divided the group up and worked up to 5 rep maxes of back squat and deadlift, respectively.  This was quite the scene, as you can imagine, with 30 people crammed between 4 bars.  But it kept things loud, heated, and intense, he way training should be in an Eastern European Olympic relic.  Between every set of squats and deadlifts, guys had to do 10 chest to bar pullups and girls had to do 5.

We spent a solid 1.5 hours enjoying this scene, then headed out to the main field for some pictures.  With the word S-A-R-A-J-E-V-O spelled out in enormous letters in the seats across from us, we took turns speed walking 50 meters as fast as possible.  This display soon escalated to a tournament style bracket, with Sunny coming out the victor.  Not exactly a surprise since his legs are twice as long as everyone else’s, but it was a good race. 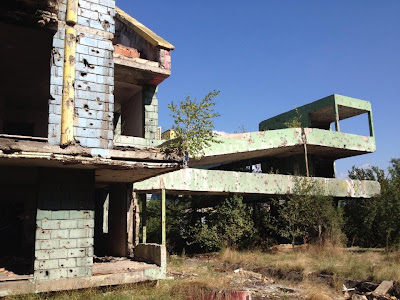 From there Adi led our bus across town to an apartment complex that had been destroyed during the war but were still standing.  This is something I had really looked forward to witnessing.  The whole place was riddled with bullet holes and crumbling debris, but we found a way to make it ours.  Everyone finding their own space, we proceeded to do the following Tabata sequence:

It was dusty, dirty, and decrepit everywhere you looked, but there were 30 people there doing something positive with the space.  It doesn’t get any more anywherefit than this.  I can’t wait to see the pictures from this WOD.

It was a big day of training, so the showers and down time we took before dinner were well deserved.  The plan for tomorrow is to head out into the country to meet up with some of Armann’s Serbian relatives on their farm.  Should be a perfect way to bring today’s urban excursion into relief.