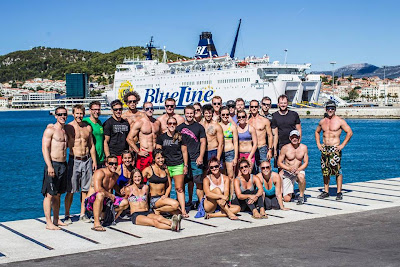 It was with mixed emotion that we left the island of Brac this morning.  Even though there are a lot of amazing things to come on this trip, it’s hard to leave a place as beautiful and as comfortable as this one.  The coastal islands that Croatia boasts along its shores could easily consume an entire vacation.  Perhaps the next AWF adventure to this part of the world will take place on a series of yachts hopping from place to place.

But for now we set our sights on Dubrovnik, the crown jewel of the Croatian coast.  We made our way across the island and to the ferry docks by 9:00 am to try and catch the earliest transport, but it turned out there were earlier birds than us.  While we were able to board the ferry no problem, our bus was forced to wait until the 11:00 am slot when there were less cars.  This meant we had a few hours to kill on the other side before we could start the drive to Dubrovnik, so we decided we might as well get a workout going.

In teams of 3 we completed 500 walking lunges, 300 situps, 200 partner rows, 100 inchworm pushups, and 400 meters gurney carry.  In all elements more than one team member could be working at a time.  We tried to team up according to body weight, but in certain instances it just wasn’t possible.  I, for example, was teamed up with Jenn and Kelly… not exactly an easy gurney carry for the two of them, so we rotated in such a way that I was rarely carried. 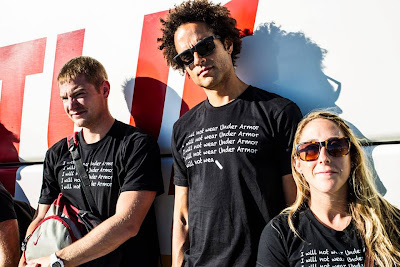 The location for this workout was right on the edge of the port, so we were essentially training in the shadows of huge cruise ships and ocean liners.  As always I was impressed with the willingness of the group to get their hands dirty.  Many of us were without training shoes because it was an unplanned stop, but there was no hesitation to do everything barefoot.  Everyone was working hard and smiling the whole time, so it couldn’t have been that bad.

After the workout we split up for a short while to grab lunch, then reconvened on the dock to greet the bus.  We boarded and made our way down the coast toward Dubrovnik.  The route we chose to take wound back and forth along the water and took us through many small beach towns.  Every one of these appeared more idyllic and quainter than the last, reinforcing the desire to sail the coastline. 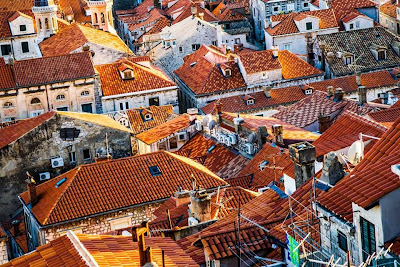 As we approached Dubrovnik, Armann explained to us that no automobiles were allowed in the old part of town (the old center of Dubrovnik is contained within an enormous castle wall overlooking the sea).  This maintains the feel it must have had while also preventing insane traffic jams.  The streets in the old city are more like alleys and the building rise vertically so that you don’t often see exactly where you are going.  In a sense, you feel a bit like in a maze, but because it is so small there’s not a real risk of getting lost. 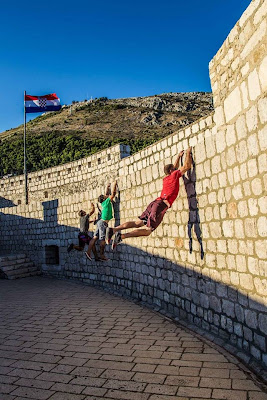 The first thing we did upon arrival was take the tour of the castle wall.  This was probably the closest thing I can imagine to the Great Wall of China, on a much smaller scale of course.  Looking out over the city from above you can see a number of churches, squares, and restaurants, but for the most part Dubrovnik appears residential.  Clothes are hanging out on lines, satellite dishes dot the rooftops, and although the architecture is 100% stone and ancient in appearance, it’s obvious that these places are “lived in.”  While touring the wall one can help but look over the edge.  Hundreds of feet straight down to the Adriatic below make this city practically impregnable from sea.  But the large hillside to it’s back offers a much simpler and direct route in.  During the Balkan Wars in the early 1990’s Serbian forces camped out on the hill above Dubrovnik and shelled the city over and over again.  Imagining this scene was frightening.

We also noticed a number of seaside bars just outside the wall where patrons could have a drink, take a dip, and warm themselves on the rocks.  Looked like a great way to spend the evening.  Somewhere around the halfway point of the walk, Denny, Donovan, and I took turns trying to scale the interior ledge of the wall using extremely amateur Parkour techniques.  This was our version of storming the castle. 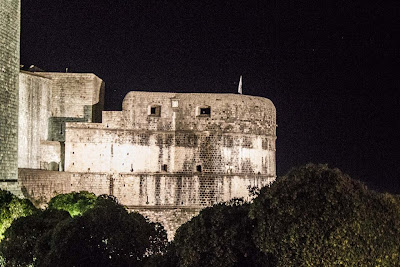 After the tour we found a nice place for dinner and went our separate ways to explore the town.  Jenn and I visited a few galleries while others popped into some bars.  One of the coolest things we came across was a public square beneath one of the churches where a group of restaurants had set out chairs for their patrons to listen to live music.  A group of 4 were playing acoustic guitar singing “Ain’t no Sunshine when she’s gone,” by Bill Withers.  So cool.