Day 2 of AWF Ireland was when our training really kicked up a notch.  We met at CF Tipperary just after breakfast on Saturday with a full slate planned:

WARM UP:
1 mile run (Irish miles, which turn out to be closer to 2 or 3 miles for every 1 American mile)
5 rounds of calisthenics: 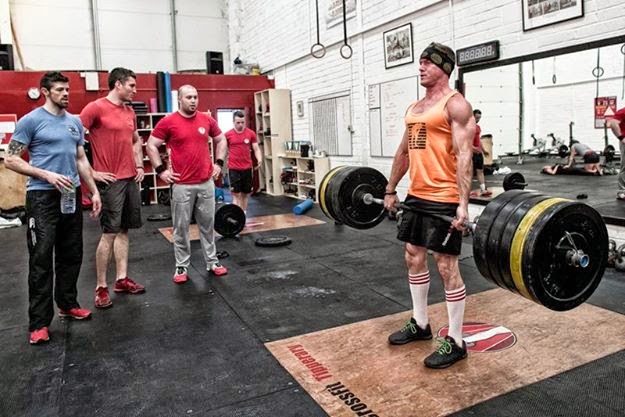 The goal of this session was to practice some things that people don’t typically get to practice (handstands, floor press) and challenge the body with some heavy stressors (deadlift, glute ham raise).  We opted out of conditioning because I wanted to save everyone’s lungs for our beach WOD later in the day. Overall I was pleasantly surprised with everyone’s aptitude on the handstand holds.  The groups from Cork and Tipperary both showed impressive body awareness and responded well to the small corrections made to positioning.  We practiced drills from the wall first, encouraging everyone to keep only their toes in contact with the wall while reaching for the ceiling.  Then we moved away from the wall and used partner’s arms to form a front and back wall for the athletes to balance between.  People were really starting to feel the way their hands could control the entire body after this.

The deadlifts and floor press are always crowd pleasers.  Who doesn’t like to lift the heaviest things possible, right?  Even with everyone’s glutes ripped up from the walking lunges the night before, we saw multiple guys pulling 190 kg for sets of 4-5.  And again, impressive technique and attention to form was shown by all. 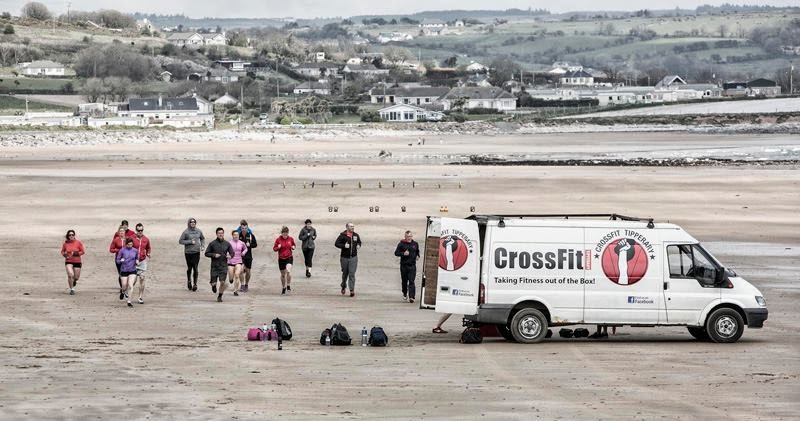 After a quick break for lunch, we hopped in the cars and took a 45 minute drive out to Ardmore Beach on the western coast.  This is a very popular spot when the weather is nice, which it definitely was during my visit.  In fact, just about every local I talked with made sure to tell me just how lucky I was to be in the presence of such sunshine.  Call it California karma.

The coolest part about this beach is that you can drive the cars straight onto the sand.  So we plodded the CFT van down near the water and marked off 400 meters along the beach.  At one end we left the van and the pullups rig, and at the other we set up barbells with 115# and 75#.  Halfway between we set up 24 kg and 16 kg kettlebells.  We then split up into teams and did the following workout for time: 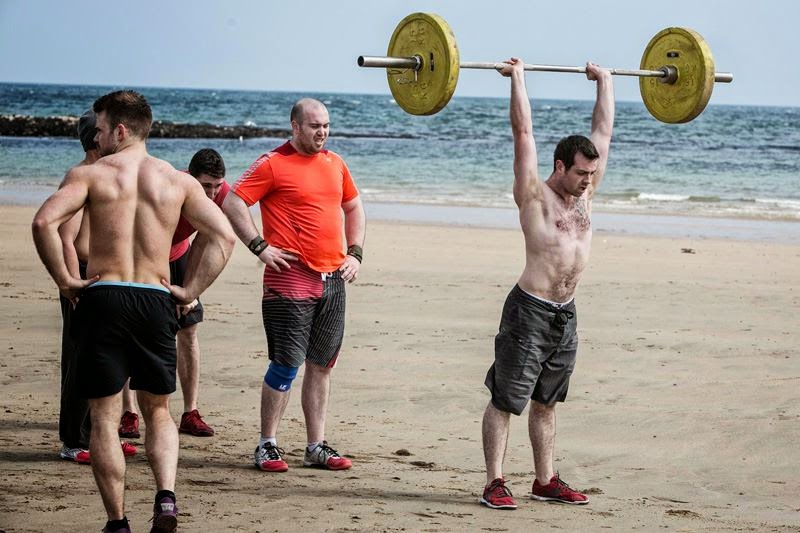 We also had to overhead carry all of our weights back with us on the return trip.  Because some teams had 4 and others had more, we made a rule that anyone not carrying a weight or a person had to be bear crawling.  What an awesome workout this turned out to be.  Beautiful scenery, beautiful weather, teamwork… it was everything you want from fitness all rolled into one.  The only thing that could’ve gone better was if my team had won the WOD.  As it turned out, we were about a minute off the pace.  But that didn’t stop us from leading the charge into the Irish Sea when everyone else had completed their turns.  Nothing like a nice ice bath to help the legs recover!!  And boy was it icy. 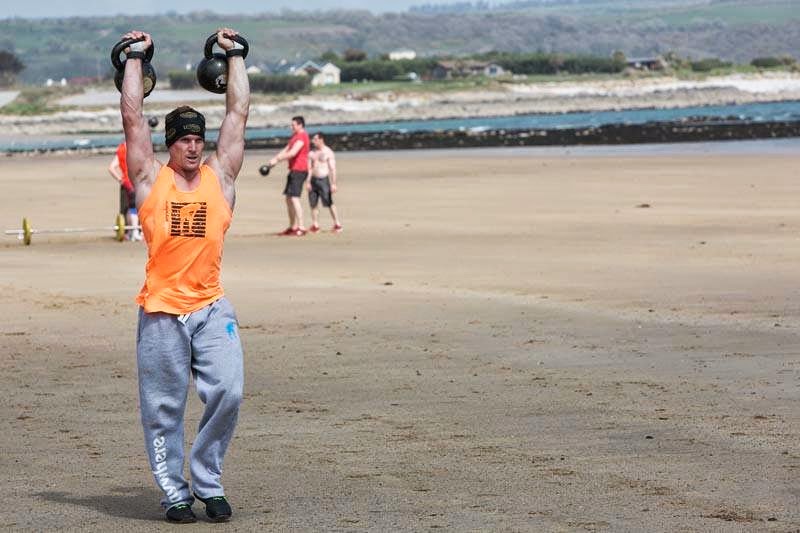 Drying off and warming up didn’t take us long, so we decided to stick around Ardmore for a cup of coffee at a local bakery.  Colin secured us free reign over the place’s back garden, so we couldn’t have been more comfortable.  Just 20+ crossfitters chillin’ out back sippin’ tea and coffee.  No big deal.  This was a great opportunity for those of us who hadn’t spoken much yet to get to know each other better.  We talked about programming quite a bit, but also the growth of fitness in general throughout the world and in Ireland.  It’s no surprise that the patterns I saw in the States are starting to form over here as well.  It’s only a matter of time until it’s everywhere. 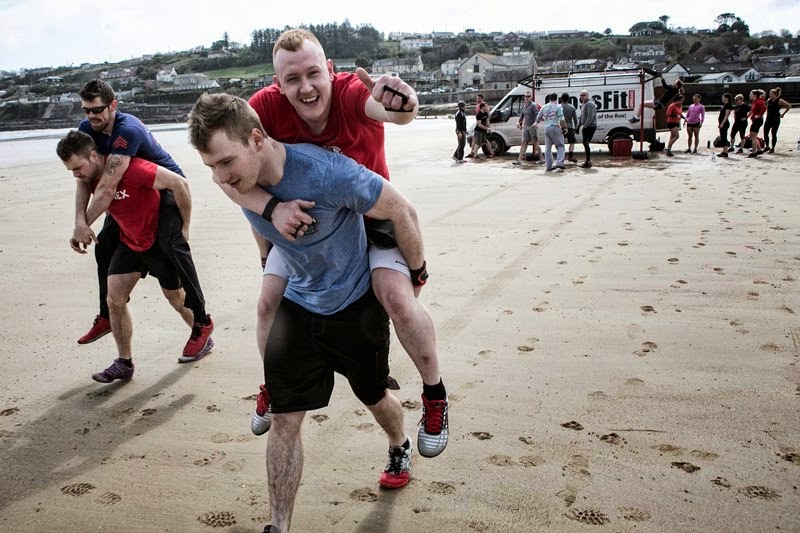 After heading home and getting cleaned up, we all took to the town for a wonderful meal.  Again, with Colin’s knowledge as our guide we struck upon an awesome restaurant with a quintessential Irish Pub attached to it.  Naturally, this was the opportunity for me to taste my first official Irish-born Guiness draught.  If I’m honest, it tasted more or less the same as the ones I’ve had back home.  But I still had to do it.  The food was great as well, with people ordering everything from crab cakes to fish and chips, sirloin to roasted duck.  I had no complaints with anything pertaining to food the entire weekend, the fare was phenomenal. 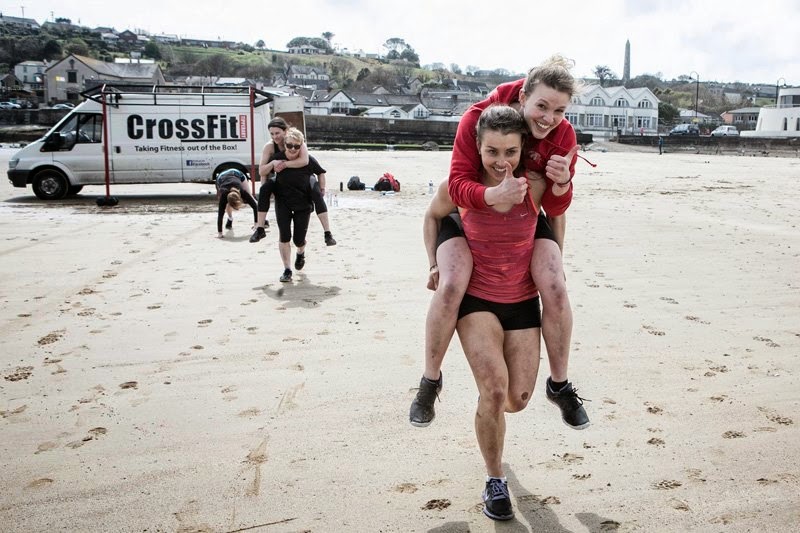 With one last day remaining, and it including a mountain assent, everyone decided to turn in early.  I was pretty wrecked myself, so I was happy to save the carousing for another time.  The plan for Day 3 was to hit the ancient monastery just after breakfast, then swoop lunch on the way to the mountain for the afternoon.
Posted by anywherefit at 7:45 AM