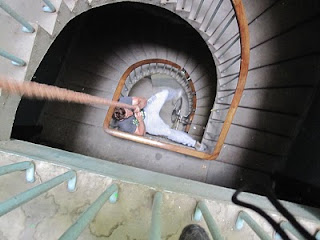 We got in to Edinburgh Friday night around 10:30 and met Jay and his Clark Gabel mustaches about the same time. Great seeing him again. The three of us stumbled our way to a hotel for the night, popping our heads in to a couple of pubs and restaurants before crashing hard.

Saturday morning came early, and the plan was to fill it with as much as possible. John came through with a huge connection from the fire department back in Sacramento, hooking us up with his friend’s brother Magnus—physics student and rock climber extraordinaire. We jumped over to Magnus’s place (just a few blocks from our hotel it turned out) with all our gear and a lot of energy. He lived on the top floor of an old townhouse that featured a weathered spiral staircase connecting all levels. John turned to me immediately and said, “Rope climb?” Magnus was down, so we checked the top banister for strength and began tying things off. Save a few abrasions and an ill-advised barefoot climb (Mulligan), this came off really well. 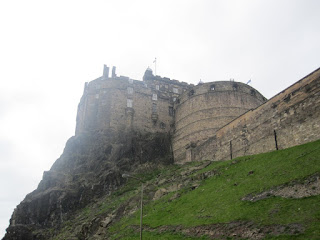 We staggered our starts and didn’t keep a running clock, figuring just finishing 5 rounds of this sequence would be a victory in itself. Technique was key, and we quickly learned that avoiding the ledges of each floor was the most important factor in saving strength. After doing 50 meters of this kind of climbing, a simple straight rope will feel like a walk in the park.

Everyone finished, though different periods of rest and recovery were utilized for safety purposes. Personally I felt pretty good throughout. Pacing on long climbs is important so you don’t hit total failure before you get your feet on the top ledge, so I tried not to blow things out at any point. We hit a big brunch upstairs after we finished before heading over to Edinburgh castle for some sightseeing.

This castle is legit. The huge block of stone it sits upon rises up like a cliff, making the castle look literally impenetrable. Just getting up to the thing from the cliff side is a workout in itself. We saw the crown jewels (unreal sword, sheath, and crown), the great hall filled with weapons and old execution re-enactments, and spent some time in the memorial to fallen Scottish soldiers. This last bit was especially impressive. No pictures allowed, but the central shrine featured a beautiful green marble tomb, on top of which sat a chest that has been unopened since it was first placed there. Hanging above in chandelier like manner is an enormous statue of Saint Michael, the archangel. Needless to say, this was a moving atmosphere.

After the castle, we hustled back to Magnus’s house where we learned of our next adventure…the highlands. His parents own and operate a hotel just on the edge of Loch Leven, famous for its spectacular hiking and location at the mouth of North Atlantic Ocean. Magnus was needing to grab some stuff from his folks anyways and thought we might enjoy the experience. To say this was agreed upon quickly is an understatement. We gathered up our things and got on the earliest possible train from Edinburgh, fully prepared for what was turned out to be one of the best 24 hour adventures I have ever had.