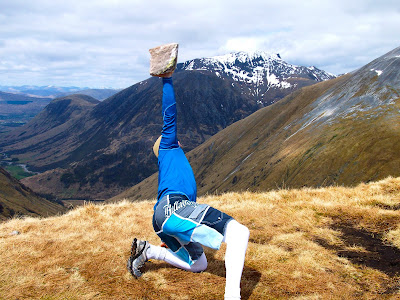 We arrived late Saturday night and had a couple drinks with Magnus's family and the rest of the crowd still mingling around the hotel bar. After some good conversation and a bit of planning for the following day, we headed to bed to get some rest. It had been a long few days of traveling and everyone was wiped out.

I awoke to a view I recognized. The bay window of the hotel looked out on Loch Leven as it stretched towards the North Atlantic, the same view consistently shown in the Harry Potter movies. Pretty cool to see it in real life. We were met with 4 full Scottish breakfasts (consisting of 2 eggs, 2 pieces of ham, 2 sausages, baked beans, black pudding, potato bread, and a grilled tomato), and some hot coffee. After enjoying this warm hospitality, we prepped for the day, one that would include a hike along one of North Scotland's many picturesque ridges to a peak just under 4000 feet above the valley.

The initial part of the climb was tame, slowly gaining altitude as we wove our way through creeks, trees, and small climbs. Jason and I did a series of interval runs through this portion, running about a minute at a time then walking a minute or so. The idea here was to spike the heartrate without killing ourselves before the real work began. After about a mile or so, Magnus took an abrupt right turn and started heading directly up the side of the mountain. This meant we were hiking through a minefield of prickly heather brush and soggy algae pockets. After a few hundred yards, everyone had swamp foot, but no one seemed to care.

During this part of the climb I started to get into a Tabata-like rhythm. The grade was getting steeper, to the point that every step was practically a full range single leg squat. I would go 20 steps hard right up the face, the rest 10 seconds. As we approached the lower crest, the workload had built up, I was getting hungry, and everyone needed a break.

When we reached the lower ridge, I lost my breath. Suddenly we were faced with a 360 degree panorama of some of the best country there is anywhere. I was transported back in time, imagining every highlander who had hiked the ridges that connect Scotland’s many lakes, seas, and oceans. At this point the sky couldn’t have been bluer, the breeze was calm, and everyone took a moment to appreciate the experience. We continued the climb up beyond the grass-line, over some loose rock and steep grade until we reached the summit. When we arrived there were only 2 others resting at the top. Everything was visible from here, including the highest peak in the UK, not far from us to the North. We enjoyed the moment, did some handstands, L-sits, and fireman squats, took some water down and killed as much time as we thought prudent before heading back down the climb. 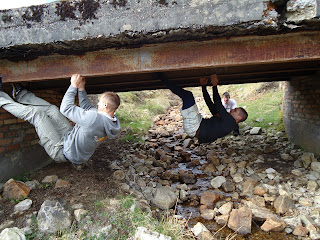 I felt much worse on this part, my ankles starting to fatigue and wear out after the long day of activity. Coming down the heather actually felt like a nice cushion. We stopped for air where an old foot bridge stood guard along the main trail. The undercarriage was lined with steel I-beams set roughly 3 feet apart, a perfect distance for doing connected spider climbs. Magnus led the way, being the avid climber that he is, and the rest of us followed. It was good to see him do it first just so that we understood how important using your feet can be. He finished all four braces where John, Jay, and I each failed somewhere after 2. 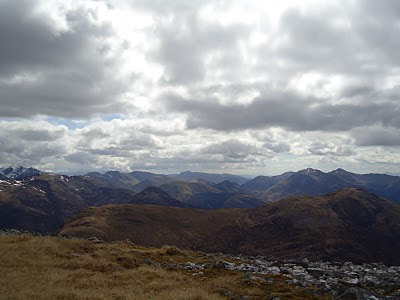 The remainder of the hike was just about getting back. We rolled into town exhausted but fulfilled, and had time for a quick meal before heading to catch the train back to Edinburgh. This was a whirlwind adventure, too short by years it seems, but it’s one I can’t imagine living without. Magnus’s family is a collection of incredible people that I feel privileged to have met, and I’m hoping to return for another visit while writing my thesis next month. Cannot thank them enough.

The video of the hike is below.