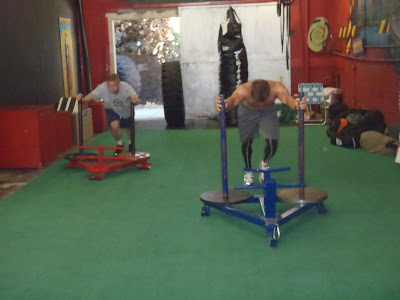 I was back down at Midtown Strength today with Camillo and Chad looking for a high heart rate effort. No better way to get that done than the prowler. I haven’t done much of this stuff, so today was hard. It really just gasses the lungs and burns the posterior chain like few other things. Since Camillo is competing in an event this weekend, it was just Chad and I getting after it today. He’s a fire captain for Sacramento City Fire and a serious stud. By round 3 of this routine I was eating dust and struggling to keep up. It wasn’t until the final round of muscle ups that I was able to close the gap. We wound up finishing 2 seconds apart at 16:42 & 16:44, respectively.

Pretty toasted afterwards. I was definitely feeling psychologically exhausted as well after the long day yesterday. Hoping to rest up tomorrow and go big on the 4th. Only 2 weeks left.

Posted by anywherefit at 7:07 AM