To anyone following these Games who has been around CrossFit for more than a year, the upscaling of this event was probably obvious. But, just in case you haven’t had the privilege of watching things grow year after year, here is a bit of perspective… in 2009, just 2 years ago, athletes did an open regional qualifier consisting of between 50 and 200 participants. If you made the cut, you showed up to the Castro Ranch in Aromas, CA a few months later the day before competition began. We brought tents and coolers, were given neon wristbands, and our athlete numbers were written on our shoulders and calves in sharpies. There were a handful of guys with cameras doing random interviews, mostly with the individuals who had competed the year before and were predicted to win. The Grand Prize was $5,000 cash.

To connect that experience with the one just completed is like untying a brain knot. Throwing your hat in the ring this year meant participation and completion of a grueling 6-week online open competition. If your aggregate score was top 60, then you competed against the best of the best for 3 consecutive days to see who really deserved to represent your region in the finals. This is as stressful if not more stressful than the actual Games. Coming through Northern California meant I had to compete against 4 Games finalists for 3 spots…the kind of ridiculous depth you don’t want to see when the margins of victory are sure to be small.

Fast forward to the finals and you have 3 days of registration, orientation, media exposure, and preparation before you even set foot on the proving grounds. Getting sized up by tailors, shoe-smiths, and pundits; trading anxious conversation with the other athletes about the potential events and different strategies to running on sand; struggling to relax your mind enough to get the sleep you need every night. The build up to the action this year was something I personally have never remotely been a part of before. And something that I utterly enjoyed. 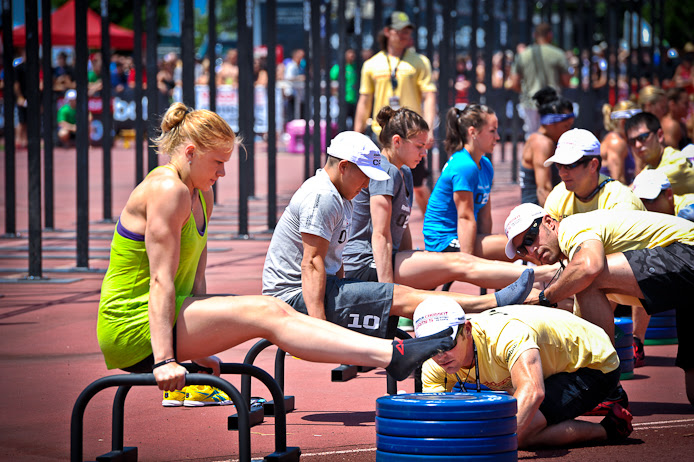 I’ll admit that part of me longs for the simplicity and austerity of Aromas. Charging through dusty hills amidst makeshift grandstands and caution tape certainly appeals to the organic character at CrossFit’s core. But the level to which the Games rose this year was something beyond personal preference or style. It’s bigger than what you’d “prefer” to see. It is a legitimate, professional sport. I was treated like a truly professional athlete. The media coverage was polished and thorough, and couldn’t have been so without the infrastructure in place at the Home Depot Center. I think this year will go down as the moment most of us acknowledge that CrossFit is in fact divided in two parts: fitness and sport. There is the community at large, working day by day to improve their quality of life, seeking to move with strength and grace through the tasks they consistently face. And there is the sport, attracting hyper-driven competitors who will train above and beyond what is required for the chance to be a part of the process I described above. While this division has been roughly delineated already, I believe the exposure and success of this year’s Games will etch it in for good.

Without overstating the obvious, the events this year were incredible. In 2009 the programming was debilitating. A monstrous hill run followed by max deadlifts, a weighted uphill sprint that left people incapacitated for 20 minutes, hammering blunted stakes into hardpacked sand followed by high volume squat snatches and wall balls. And that was all on day one. We still had max effort snatches, parralette handstand pushups, and a grueling 20+ minute chipper to go. The fittest on earth were lined up at the massage tent trying merely to finish, let alone win.

Last year the programming adjusted, swinging towards skill rather than workload. Handstand pushups on rings, pistol squats, and “Amanda” were the talk afterwards. The strength event was a shoulder to overhead tacked on to the back end of a triple Helen, favoring the conditioned and the bold but not necessarily the strong. There were more events than ever before, but all were blended tests—mixing skill and work capacity, endurance and strength. There were no pure WODs that rewarded excellence in any one area.

This time around HQ got the mixture just right. Athletes were tested on an array of skills during WOD 2 while they were fresh, leaving no question as to whether fatigue would play a role in our ability to complete the task. We were tested on pure strength during WOD 5, given 4 minutes to do a max chin up and a max snatch before picking up close to 300# and carrying it as far as possible. The first event of the competition certainly tested our endurance, not to mention the ability to swim, and the last tested our ability to recover in quick fashion before fighting to finish. There were rope climbs, prowler pushes, sled pulls, and sand runs. There were rowers, Watt bikes, and monkey bars. There was even a more traditional test of athleticism in the softball toss. This years games literally had everything: Short duration, long duration, and everything in between. Gymnastics, strength, and conditioning. Traditional movements and extremely creative new ones.

The proof that this test of tests was balanced can be found in the top 10 finishers and their body types. Looking down the line you had Chris Spealer, Pat Barber, and Josh Bridges, 3 guys looking up at 5’7” with exceptional gymnastic skills and conditioning but also impressive strength. You also had Spencer Hendel, Jason Khalipa, and Matt Chan, 3 guys easily over 210 lb and extremely powerful. You also had Rich Froning, Zach Forrest, and Dan Bailey, athletes of medium height but with muscular thickness that screams CrossFit. Finally you had the leaner guys like myself, Graham Holmberg, and Ben Smith, rarely the strongest or the most skilled but always good enough to stay in the hunt. This was as balanced a top group as one could ask for and I think that speaks volumes about the programming.

As has been much expounded upon, the community CrossFit has produced is without equal. The intent and earnest with which spectators followed the weekend’s events from around the world was staggering. I can’t wait to hear the web numbers when they come in. The athletes remained humble and supportive even in the most competitive of situations. Before the swim WOD people were sharing strategies for footwear in the sand, gloves on the pullup rack, and pacing in the water. There were full blown softball practice sessions on the track during our briefing on Thursday with the ex-baseball players assisting those who had less experience. The leadership and sponsors of the event were undeniably awesome. It was clear that the interest from all parties was in the growth and success of the sport, not in the commercialization of a product as many had feared. Not that I ever doubted the integrity of the people I have met and grown to respect in this community, but being a part of an event this big with this many variables and still seeing the same dedication and commitment was reassuring just the same. Crossfit will never dilute into a fad or some second rate perversion of athletics because the people it is built on, the community of affiliates and athletes it produces, and the sponsors now opening its doors to the mainstream are all on the same page. Everyone is intoxicated by its energy and potential, and no one is willing to accept anything less than first rate representation.

I am extremely blessed and proud to be part of this process and hope it continues to reach more and more people out there looking for change. After this past weekend I don’t see any reason why it won’t.

Posted by anywherefit at 6:13 AM