Spending the weekend at the CrossFit Games as a non-competitor wasn’t easy.  I was happy for any distraction during the event as I found much of it difficult to watch.  I will say that it got easier as the weekend wore on… something about cold beer and good weather seems to cheer you up no matter how sour your mood is.  But there’s no doubt in my mind which side of the wall I’d rather be on.
There were a few things that stuck out for me this weekend that I want to share.  First, we’ve almost outgrown the Home Depot Center, if that’s even possible.  It was an army of spectators all 3 days I was there.  The Vendor Village was like an Indian Bazaar, hustling and bustling at all hours.  Food and drinks were being sold everywhere at exorbitant prices, taking advantage of a fan base with nowhere else to go.  Viewing in the stadium was packed for every event, and waiting in line for the bathroom felt like I was at an NFL game.  The growth that this phenomenon continues to support is scary and exciting.

Second, there is an accelerating professionalism that is permeating the event from the ground up.  The spider cam (a camera strung between wires from 3 different points above the track and stadium) captured some unreal footage of the athletes during the workouts, inevitably preparing ESPN viewers for some great television.  The jumbo-tron filled the gaps between events with back-stories and interviews that put human faces to many of the competitors.  The sideline reporters asked good questions, didn’t harass the athletes horribly, and in general did a great job.  If I had to point out a flaw in this evolution, however, it would have to be the announcers.  As everything around the Games has become more professional, this aspect is lagging behind.  Routinely butchering names, losing track of competitor’s progress, and often focusing solely on one individual out of 12, this is an area that can stand an upgrade.  By the end of the weekend, Dave Castro had re-emerged to assist with this aspect, a welcome sight for those of us who remember the days when he did the entire thing himself with knowledge of the individuals and events.  I know this is not an easy job, but as the sport grows, so too must the standard by which its voice is measured.

Third, the programming for the event was brilliant, in my opinion.  In 15 scored events over 4 days, athletes were tested across a truly broad and balanced range of aptitudes.  There were pure tests of endurance (triathalon), agility (obstacle course), speed (sprint), power (ball toss & broad jump), and strength (clean ladder).  There were surprise elements that the athletes had never practiced (double banger, medball clean).  There were WODs that cruxed on gymnastics movements (parallette hspu & bar muscle ups) and WODs that cruxed on strength movements (Chipper & Isabel).  There was even some good old-fashioned grunt work (rope/sled WOD).  Perhaps most importantly, athletes weren’t told ahead of time what they would be doing, so everyone had to rely on their training and adaptability to succeed.  Without much exaggeration, this year’s Games had a little bit of everything so that no one type of athlete could hide their weaknesses.  Watching as the events were announced and completed, I was impressed and appreciative of the work and thought that had obviously gone into programming the weekend.

But the depth of the programming here seemed to highlight the lack of depth therein at the Regionals.  Watching the footage of the triathalon and seeing some of the times, it was clear that many were merely trying to survive rather than compete.  The paralettes gobbled all but a few women, and most men were barely keeping a 1:45 pace per 400 on the triplet.  Talking with fans around the event over the course of the weekend, many were echoing the same concern: why did they have to wait until the Games to see such a balanced test of fitness?  Compared to what they were watching in Carson, most felt that the Regional was little more than a weightlifting contest, and a rehearsed one at that.  The obvious answer to this question is thus: logistics and reproducibility.  If the Regional must be done in 17 different locations, the event planners don’t have the luxury of programming anything too crazy.  I agree on this point: there’s no way to test what the Games can test in 17 different places.  However, I do think it is possible to make the test more similar to the Games than it is now.  3 major ideas to support this:  1) Hold every Regional on the same weekend.  It’ll shrink the website traffic and lessen the buzz of what has been a 6 week feeding frenzy, but it keeps the workouts from becoming a practiced skill instead of an unknown and unknowable test as CrossFit is designed to be.  This would eliminate the athlete who depends on “cramming” and force everyone to rely solely on the quality and balance of their training to that point.  2) Host every Regional at a track.  It is beyond argument that it’s important to test running in fitness—hosting the Regionals at a facility with a track allow a spectator friendly, reproducible option for doing so.  3) Do a long WOD.  It’s obvious that aerobic endurance is a priority at the Games—3 of the past 4 years the Games have opened with an event that is longer than 40 minutes.  The sum time of my events at Regionals this year was 54:00.  There is a disconnect here.  Doing a legitimate aerobic endurance workout isn’t necessarily the spectator friendly thing to program, but it means that in order to get to the Games you have to prove that part of your fitness.  This would be a good thing.
Finally, not being in the athlete tent preparing for workouts allowed me to observe and digest other aspects of the Games like never before.  This was great!  The energy around the vendor village was cool to be a part of, along with seeing the different types of people that have come from around the world to be a part of CrossFit history.  The team competition was a lesson in camaraderie and teamwork, with the stadium seeming to change colors between heats as droves of supporters screamed to make their presence felt.  During the individual competition, I learned a bit about how we as athletes are perceived from a distance.  It wasn’t hard to tell who were the fan favorites.  Camille Leblanc-Bazinet always received a loud ovation, along with Jason Khalipa, Chris Spealer, Matt Chan, and Annie Sakamoto.  Defending champions Annie Thorisdottir and Rich Froning were also consistently cheered, for obvious reasons.  2010 champs Kristin Clever and Graham Holmberg drew some applause as well.  The majority of the athletes, however, did not elicit much of a response from the crowd unless they did something of note during the workout.  I thought this was telling in a couple ways.
First, it’s obvious that although the crowds were larger than they have ever been, most athletes are still unknown to the majority of spectators.  People were responding not because they loved or hated the individual, but largely because they recognized the name.  I expect that as the sport grows, so too will the media coverage, and eventually the number of athletes with whom the crowd holds favor will increase. 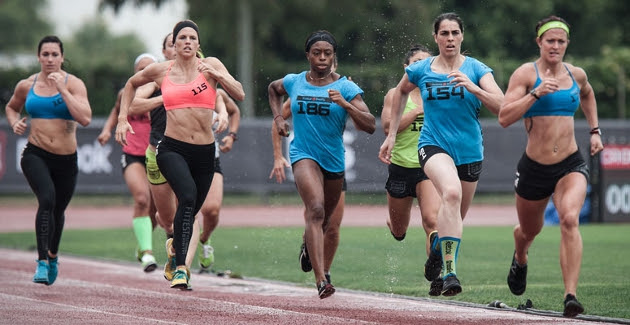 The second thought I had was that spectators are thirsty for some sort of connection to these athletes.  They need to feel like they know them in order to cheer for them.  Throughout the weekend I watched this “knowing” occur almost spontaneously when an athlete would smile at the crowd or scream as they finished a lift.  The same thing happened if an athlete was repeatedly failing attempt after attempt.  It dawned on me that between the focus and intensity of competition, most athletes must look like cyborgs from the stands—more machines than men.  The truth is, people want to see pain and anguish.  They want to see joy.  These are elements of life that they recognize and relate to, so seeing them at the Games makes the athletes human.  Better, it makes them heroes.
Ultimately, I left the 2012 Games as proud a part of the CrossFit community as I have ever been.  I was more impressed with the events, organization, and performances than ever before, and the professionalism with which this event is being handled only bodes well for its future.  As an athlete, I am motivated to excel; as a fan, I am quick to applaud.  2013 starts today.
Posted by anywherefit at 4:56 AM