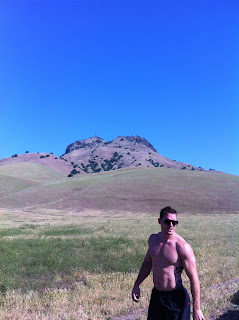 It's been a long time coming, but I finally ran the Sutter Buttes.  For a few years now I've been trying to organize a trip to this spot in Northern California, but haven't been able to make it happen until now.  For those of you who don't know, the Sutter Buttes are the smallest recognized"mountain range" in the world.  At just over 2200 feet elevation, they're by no means the Rockys, but it's a mountain range nonetheless.  I always thought it would be a cool test to try and conquer them.  Luckily for me, a friend of mine was able to get a group of us access this past weekend and off we went.

To give you an idea of the task in front of us, the 2200 feet was to be gained in just over 2 miles.  That's insane.  I've done major hill runs that gain half as much in the same distance and been slaughtered afterwards.  To put it in more calculated terms, we were averaging about a 20% grade the entire time... or 5% steeper than the highest setting on your treadmill.  Now, I consider myself a pretty strong runner, and an above average hill runner at that.  There was NO WAY I could run the entire way.  I probably made 3/4 of a mile before I had to break stride and start hiking.  The rest of the way was a battle between walk and run, pushing on or giving in.  The mental strain of a hill this steep is debilitating.  All you want to do is stop.  The advantage I had was that I was running with a group and I didn't want to be the one to quit. 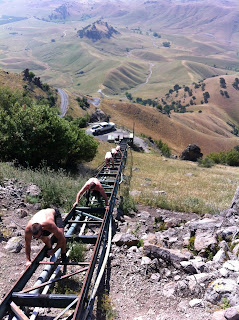 Often times on a steep hill you'll find switchbacks that flatten out and give your legs and back a break.  Not here.  Every switchback turned relentlessly upward.  My calves, hamstrings, glutes, and back were smoked right away and no part of the run offered relief.

By the time I reached the top, 28:02 had elapsed.  28 minutes to run 2 miles!!!!  Some in our group took over 40.  Talk about a test of fitness.  At the top we did our best to cool down, then did a short tabata WOD including ball slams (ball was driven up in the pickup), pushups, planks, and squat holds.  After we finished this we scaled the trolley tracks to the highest point on the mountain where the radio and TV towers are kept.  Nice little finishing bit of anywhere style training I thought.  Definitely a memorable day and a great chance to interact with a local landmark.  Not sure how soon I'll be doing it again though...