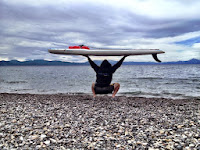 This past weekend marked the second annual Adventure WOD, hosted by CrossFit Anywhere.  This year we teamed up with CrossFit Avalanche to host the event in Lake Tahoe.  The idea was that a canvas as broad and beautiful as Tahoe would offer unlimited opportunities for creative programming while taking the competitors away from the comfort of regular urban life.  A true adventure.  Mother nature didn't disappoint.

All week long we were checking and re-checking the weather forecast.  One day it looked fine, the next they were calling for rain, then it was scattered thunderstorms.  As an event planner, this is a tough situation because you really have no control over the elements.  While we discussed plan A's and plan B's in case things got rough, we were really just hoping and praying the storm held off.

The morning of the event came and it was chilly.  Volunteers and athletes alike were huddling together outside Avalanche, sipping their coffee and listening to standards.  The first task teams would have to perform was a max wall handstand for time.  This would set their heat order for the first 2 events.  Those events were as follows: 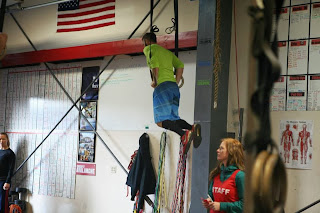 The minimum work requirement for event 1 was 1 muscle up and 10 pullups per person.  Otherwise it didn't matter how the teams split up the work.  At the end of 5 minutes teams moved out of the gym and into the parking lot where the strength ladder awaited them--a line of men's bars and a line of women's bars.  There was no minimum work requirement here, just the sum total of poundage lifted between the two.  We saw some pretty impressive feats of strength during this portion of the day, with Drew Canavero making it to the final bar (315#) and Allisandra Pichelli finishing the ladder entirely (185#). 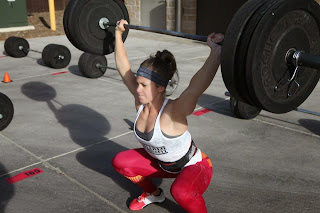 Right away we could tell that altitude was going to be an X factor all day.  People were sucking wind during the squat complex like they were doing an all out metcon.  Moral of the story: 6000 feet elevation is no joke, even when you're doing 3 squats per minute.

The standings after the first 2 events were then scored and tallied to establish the starting order for the adventure race.  The first place team would start first, second place :30 behind them, 3rd place :30 behind them, and so on until all teams had departed.  The starting line for the race was at the Tahoe Biltmore Hotel at the California-Nevada state line, making this possibly the first interstate CrossFit competition.  No big deal. 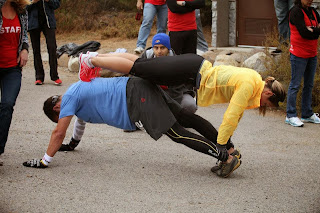 Once they began the race, teams would not stop for another 2+ hours.  Their tasks included a 1.1 mile hill run up a fire access road, 50 partner burpees with lateral jump, 2 minutes of partner planks, 2 minutes of crow pose, 2 minutes in a 1 armed handstand, solve a math problem, run 1.1 miles downhill, bike 6 miles, partner paddle board 600 yards, bike 3 miles, 50 partner burpees with lateral jump, 5 wall climbs, 100 kb swings, 75 goblet squats, 50 kb snatches, 25 thrusters, 400 meter sandbag farmers carry, and a 400 meter run to the finish line.  If all that wasn't enough of a challenge for these teams, the skies opened up while they were on their bikes heading towards the paddle board shop and started dumping rain.  The wind was whipping on the water, churning enormous waves onshore and dumping people left and right.  You could see the athletes go from competition mode to survival mode in an instant.  I can only imagine what it must've been like to get out of the water and get back on their bikes in the rain.  And then to swing kettlebells and carry rain-soaked sandbags.  From there on out it was grit and toughness that would get them to the finish line. 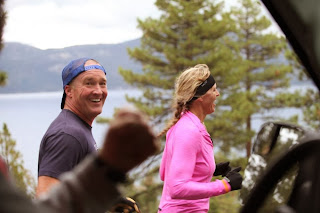 When it was all said and done 33 of the 35 teams that started the day, finished the day.  CrossFit Avalanche was a tightly packed sardine jar of shivering bodies and barbecue, as everyone tried to warm and refuel themselves.  People were laughing and crying (depending on the person), but all were incredibly accomplished.  I could not have been more impressed and inspired by the durability and toughness of these athletes.  If there was ever proof that CrosFitters are hard to kill, this was it.

Taking home the gold were Brandon Caskey and Monica Renk of South Tahoe CrossFit.  They were 11th after the first two events and made up ground during the hill run and the partner holds, before taking the lead on the bikes and extending it on the paddle board.  They would never relinquish it.  Second place went to Matt and Chelsey from San Francisco CrossFit, aka the "Purple People Eaters." 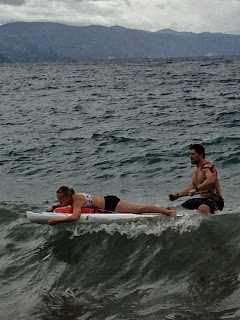 A big thank you to all the volunteers who made this event possible.  Some showed up the night before to run through events and all were there at 6:00 am the morning of, standing in the rain counting reps, and running alongside the teams to keep them moving.  Myles and CrossFit Avalanche were incredible hosts, if you've never been to their box it's a must visit.  Finally, the vendor support was amazing as well.  Alpha Strong brought their sandbags into the wild and they held up perfectly.  FitAID was there til the end giving out recovery drinks to depleted athletes and cases to the winners. Men Wielding Fire provided delicious food at the finish line, without which I'm not sure I would've made it home.  In sum, it was a brutal but memorable day that I can't wait to start planning for next year.  Congratulations to all the participants for making it through!!!

Check out our video from the event at the following link: