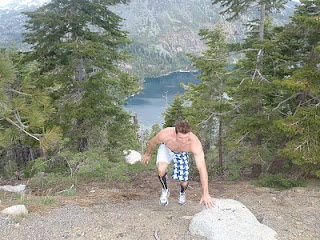 I had run this route along the Angora Ridge in Lake Tahoe before, but never with a planned interval. The reason for trying this today was to improve my work threshold for continuous running uphill. The trail I took wound for 2.8 miles (as measured in the car beforehand) and climbed approximately 1000 feet. This means that it was no Esja from Iceland, but nothing to spit at either. Plus, this was all happening at 7000+ ft above sea level.

The initial part of the run was relatively flat so the first few minutes felt okay. My pace was fast on the runs and I recovered decently on the walks. At about minute 3 I hit the first of the major inclines and quickly realized how much harder this was going to get. My lungs just couldn’t get the air they needed as I tried to maintain my steady pace. 10 seconds was feeling shorter and shorter and the climb just never seemed to end.

12 minutes in I was ready to die. My work intervals were lasting between 16-17 seconds now, rather than 20, but I still managed to run them every time. This was a major mental victory. Forcing myself to start running when the rest period felt so short took some determination.

At around 19 minutes I hit the top of the climb and things began flattening out. I think my heart rate was steady over 200 by this point but the mere lack of incline quickly brought it down. The remaining distance my pace picked up again on the runs and I hit the finish line in 25:16. Keeping to the Tabata sequence the whole way was tough, especially during the steeper parts. It’s unforgiving because the watch does not care what the terrain looks like. You’re running or walking based on time, not preparedness or geography. I was simultaneously very happy and a little dismayed by this workout. Happy that I didn’t bitch out and finished hard. Dismayed that I am in such poor cardiovascular conditioning. I’m afraid the ankle injuries have taken more of a toll than I expected on my ability to run for long distances. With only a couple weeks to go before Carson I don’t think there’s much to be done about it either.

I’ve got a double day tomorrow and then off to Denver for a cousin’s graduation. Looking forward to more exploration at altitude and maybe hitting a local box or two.

Posted by anywherefit at 8:03 AM