Our last day in Wales was a doozy.  It was spread well between some applied fitness (tree climbing, laser tag), some skill acquisition (archery), and an all out ball buster of a workout (that horrible looking marathon above).

The weather started out beautiful and cold, but quickly gave way to a more traditionally Welsh gray and wet.  Being out down in the ravine trying to climb trees as the rest were darting around the rainy forest trying to "kill" each other was pretty surreal.  You could hear the guns echoing and people crashing through the brush like it was the Vietnam War.  I half expected an aerial napom assault from the kids on the zipline.

After lunch we took to the tournament field where we got to try our hand at archery.  I have to be honest: I was looking forward to this all weekend.  I haven't fired an arrow since I was a kid and have always wanted to be able to do it well.  Looking back on it now, I should've created a workout that involved the bow and arrow.  How cool would it have been to do a thruster/arrow couplet?  Not a new concept if you consider the Biathalon in the winter olympics, but still kind of a cool twist.  I'm going to find a way to make this happen at some point. 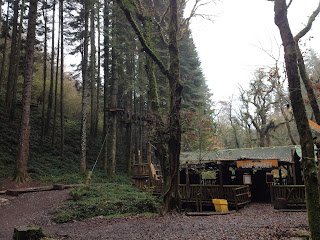 That said, this was such a fun experience!  Not as difficult as I was expecting, but certainly not easy by any stretch.  The slightest wobble on your release and the arrow is guaranteed to come off wonky.  After a few practice rounds everyone was starting to get the hang of it.  More than a few bulls eyes out there, and only a few air balls.

As the daylight started to fade, we hustled up the hill and rented bikes for everyone, got sized up, and made our way down to the Beaverfit pull-up rig at the back end of our caldesac.  After a quick rundown on what we were to be doing, we headed to the lake where the workout was to begin and kicked things off.  The path around the lake measured almost exactly 400 yards, so we used that as our track.  And the track was wet!  We were bear crawling through puddles, mud, and gritty bricks.  From the start it was clear that this workout wasn't going to be pleasant. 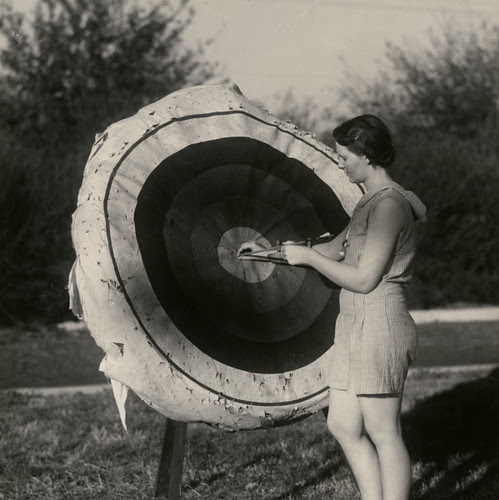 That trend was only furthered during the bike ride up the hill.  Squishy tires and heavy bikes put a hurtin' on the legs before getting to the deadlift bar.  Wet hands didn't make things any easier, especially when we moved to the pull-up bar.  But managing the elements in a longer WOD like this is par for the course, so everyone seemed to settle into things after a short while.  Sven and I were working neck and neck pretty much the entire time, as usual.  The portion of the workout where I could make up the most time was during the bike carry downhill.  Sheer awkwardness is the only way to describe this exercise. Metal bike frame on the shoulder and neck while running = severe discomfort.

The coolest part of this workout was that people were scattered all over the place, all at different points in their WOD, but constantly encouraging one another.  As I was biking uphill I was getting cheered on by those carrying their bikes downhill.  As I was finishing the burpee broad jumps and getting back on my bike to head up to the top, I was hearing it from the people just dismounting.  Such a fun environment to train in when everyone is so excited and supportive.  Couple that with the challenge of the elements and you're bound to have a seriously memorable day.

AWF Wales wrapped up almost immediately following the workout.  Quick showers, quicker good byes, and everyone was suddenly back on the bus and heading toward Cardiff.  Despite the abrupt conclusion, this trip was phenomenal.  33 people from all over the UK, Germany, and the U.S. descending on west Wales and bonding in such a short period of time.  Though different than past trips to Iceland and Europe, AWF Wales was in keeping with the main idea that makes these trips work: take people away from where they're comfortable and put them in situations where they're so physically challenged that they have to band together and endure.  It's what CrossFit does in boxes around the world, and it's what these trips are all about.  I can't wait to see the video RC Films will produce of this weekend.  So many great memories.
Posted by anywherefit at 11:07 PM