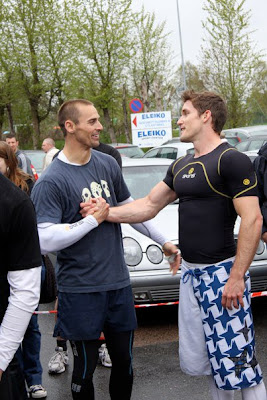 Know where to find it.

Everyone has their preferred competitive environment, not the least important aspect of which is the people they choose for company. And while your performance ultimately hinges on your ability to complete whatever challenge is set forth alone, having others nearby only enhances the likelyhood that you'll do so. Who do you lean on when you’re tired? Who do you celebrate with when you succeed? Who shares the burden of anxiety when the pressure mounts? These are pressing questions for which you'd hate not to have an answer come crunch time.

The recent Regional Qualifier in Halmstad offered a window into the different forms these networks can take. I saw the full spectrum of support in operation throughout the weekend, from family and friends lovingly absorbed in specific athletes to random spectators cheering anyone and everyone to succeed. There were many examples showing this disparity from which to pick; i've chosen three.

The crew from Iceland was like a pack of arctic dogs. They moved together, ate together, woke, slept, and breathed together. When one was competing, all were competing. During the final WOD of the weekend, Sven and I were within a few feet of each other but I doubt I could’ve heard a single word if he had uttered it. It felt like the entire island was raining down around us. It was the same when Annie competed; even louder when it was the affiliates’ turn. During the runs, they were chasing each other around the course shouting encouragement and epithets to the point that I doubt any competitor would dare not finish. After every event they crowded around offering congratulations and conciliation. In between they hung together, strategizing, laughing, and re-fueling for the next challenge. It was inspiring. I could only smile, pretend I was Icelandic, and assume they were yelling at me.

Support like this can have enormous benefit because, by spreading the burden over many shoulders, the individual feels less alone. He can drown out pressure, nerves, doubt, and even pain. It gives him pride in himself and in the group he represents, offering one more reason not to quit when things get tough. But it can also be overwhelming. Too many voices will blot each other out, leaving nothing but a wall of sound. Often it’s not the mass of noise that pushes us on, but the single voice that cracks the throng.

Richard Vanmeerbeek came to Halmstad with such a voice: his father; and during the course of the weekend this voice proved as strong as any crowd. I rarely saw one man without the other. Whether they were eating, lounging, or in the midst of an event there was never more than a few meters between them. Neither appeared affected by what happened in other heats or in events already completed. Their focus remained on what Richard could control: himself. When he competed the voice of his father sung above the rest, coaching and urging his son onward. When he rested their conversations were quiet and subdued, strategizing for the next event. If time allowed, they drove back to the hotel to eat and relax away from the surging energy of the Eleiko Center.

It was interesting to observe how well adapted Richard was to this type of environment in only his second or third competition. His demeanor was consistently calm, focused, and unagitated; hardly the hallmarks of a typical 22 year old CrossFitter. He wastes little energy and maintains maximum concentration. Much of that has to come from his intimate system of support and the calming influence of a person whose belief in him never falters. It’s a truism that the impact we have on a group and that which it has on us is reciprocal. Some guys are built of fire and brimstone and they need that type of environment to excel. Others prefer cooler heads with less distractions. Some seek both. Finding the right balance is crucial.

The support I enjoyed in Halmstad was unique from those mentioned above, primarily because its roots were so shallow (no relationship I have here is older than six or eight months). Yet there were people urging me on as hard or harder than any man there. I talked strategy with, and felt compelled by, many athletes I’d only just met. I was at ease between WODs because I was enjoying the company of people I’d visited with or competed against months earlier. A network of support like this would never forge itself so quickly in the real world, but it seems almost commonplace in this community. I think it’s this type of personal connection that makes CrossFit so uniquely rewarding.

To think that until last fall every person in Halmstad was a perfect stranger to me is truly a remarkable thing. Sven and I were fighting tooth and nail in every WOD, yet I found myself wishing for his success as much as I wanted my own. Since last November in Copenhagen, Sarah Troelson Krarup has become like a sister to me. She's the one I look to for advice, encouragement, and approval before and after every event. Jason Mulligan has been a friend since January of this year, but he's become one of my best mates in the months since. His presence in Halmstad was like that of a childhood friend you never needed to work to understand.
These people will be friends for the rest of my life. Such relationships are rare because theirs is a camaraderie built on competition, rivalry, and respect. CrossFit thrives on them. It's not rocket science that this community is so strongly knit... these people are its seams. I’ve come to realize that my time in Europe has been, among other things, a process of building such relationships.
It's a lonely journey that has produced in me a crowded soul.
Posted by anywherefit at 9:13 AM