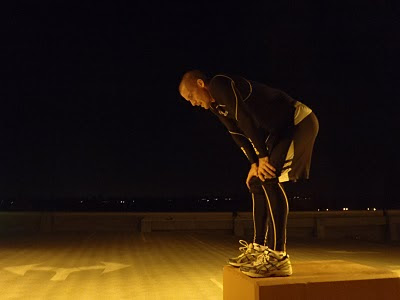 Take advantage of yours.

A farmer doesn’t plant crops without a harvest. An investor doesn’t invest without a return. But such is the tragic circumstance of a man who trains day after day without using what he’s gained.

With the surplus of material floating around the Internet, shelved in libraries, and taught in schools, it’s easy to lose ourselves amongst the methodology. Nutrition, programming, recovery, adaptation—there’s so much to know that the ‘process’ of fitness becomes a trap well laid. All this information fights for our attention and, as a result, we lose the forest while sifting through the trees.

That forest, while superficially unique from person to person, typically boils down to a better quality of life. Could be that we hate having to ask for help getting in and out of the car or that we feel self-conscious about the forty pounds we’ve gained since high school. Maybe we’re tired of being told we’re too small, too clumsy, and too slow to be an athlete or we simply want to get control of our asthma. Regardless of the particulars, we are all driven by a desire to transpose weakness. Pursuing fitness is the means to do so.

The problem is that the gathering of information and the daily application of it become ends in themselves. We homo sapiens are easily satisfied by our efforts—checking boxes is our forte—and we’re not above improving for improvement’s sake. But this is missing the point. Take your average Joe, for example. He stepped into the gym 2 years ago with sloping posture, weak muscles and joints, low self-esteem, and a crap habit of spending all his free time on the sofa watching TV. After 24 months of training, he’s improved his range of motion, his core and lower body strength, and even his bone density. He’s developed a love for chasing PR’s and has a genuine sense of discipline when it comes to training. He’s gone from feeling relatively weak and unable, to feeling capable and physically strong. But he’s still DVRing 10 programs a day and spending his nights and weekends anchored to the couch.

In spite of his numbers in the gym and the self-esteem he’s built outside of it, Joe’s quality of life looks very much the same as when he started. Now he just has slightly lower body fat. This. Is. Pathetic.

We sweat and we struggle and we bleed our way through self-improvement only to squander the opportunities it provides. Logically, it makes no sense. What good is a 300 lb back squat if you always take the elevator? Who cares if you run a fast 5k if you never leave the treadmill? Man is born to live, not to prepare for life. Improved physical capacity is an opportunity to experience it above and beyond the norm, but it’s worthless without action.

Some will argue that it’s Joe’s right to spend his free time this way, that fitness does not carry with it an obligation to be active and engaged, and that his is a conscious choice and therefore defendable. These are fair points, but allow me to respond. First, it’s Joe’s right to waste his hours outside the gym on whatever mindless dribble he pleases. It’s my right to call him a moron for doing so. How many Seinfeld re-runs do you really need to watch big guy? Second, I’m not arguing that he has to throw away his television set because that would be ridiculous. Who ever existed without television? I’m just suggesting he lose the remote from time to time and let his hard-earned physical ability off the leash. Third, nobody chooses lethargy. They slip into it like a broadband coma. It’s a lifestyle that emerges from repetition and a consistent lack of consciousness, so don’t give me the couch by choice routine. If we actually took a second to think about it, we’d realize we don’t enjoy it all that much.

Example. Think back to the last time you had an injury or an illness that forced you to stay off your feet for a while. All you could do was sit on the couch, watch TV, and withdraw from the world until you healed. All you wanted to do was spring up, go somewhere, do something, and re-engage. You swore to yourself that when you got better you’d appreciate your health and take advantage of every physical opportunity you had. Now that thought slips your mind somewhere between Frasier and Friends. Sound familiar?

Joe’s quality of life will only improve when he breaks this cycle.

All the information we gather and gym hours we spend amount to very little if we fail to use them elsewhere. It doesn’t mean we have to go out and take on a series of extreme challenges, just that we have to take on something. Be it getting out of the house more, joining a club soccer team, or climbing the stairs at work, we have to find a way to physically engage our lives or that coma becomes consuming. We should all dread the day when life is twilight-lit and there’s more we wished we’d done. Like the kid who feigned injury to avoid practice only to realize halfway through he really wanted to play. This revelation smacks bitter in our subconscious because it’s so true yet so quickly forgotten.

Posted by anywherefit at 8:52 AM