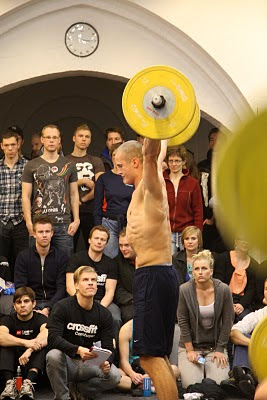 Back in the drivers seat and feeling good! After 8 solid days of rest my body is feeling recovered and ready to build towards May’s European Qualifier. Also, I now have access to heavy weights again. First time since arriving in Paris on January 4th. I get to lift with the big boys on Tuesdays and Fridays, with supposedly no limitations. How much of this is true still remains to be seen.

One thing that is without doubt, though, is my return to a cornerstone training program. Now that I know exactly what I have at my disposal and on which days I will be able to dispose of it, I am forced to organize my programming around those days. So, from now until I leave Paris in 6 weeks, Tuesday is for Olympic lifting and squatting, and Friday is for deadlifting and heavy pressing. Mondays, Wednesdays, and Saturdays will be AM/PM days, pairing outdoor challenges with gymnastic & lighter weight metcons. It's going to be a heavy workload. Love it.

This morning went pretty well, although the sprints felt like death, if I’m being honest. I went over to the track around 10:30 this morning, so it wasn’t too busy. But it was chilly outside. I’m not sure if it was because of the cold weather, the lingering effects of a chest cold I had last week, or just 8 days away from any heavy cardio, but my lungs were collapsing during the sprints. Going from a plyometric upper body movement directly to an explosive lower body movement probably didn't help matters either. The initial 100 meters after doing the clapping pushups made me want to puke on every round. My times got consistently slower, as should be expected, starting just under 1:30 and dropping back close to 1:45 by the last (this is pushups and run combined).

Important point to be made here. If somebody did this workout and their times didn’t get worse, they weren't sprinting. We say “sprint” a lot when we write workouts on white boards, but people do not sprint. Easy answer for this one: sprinting sucks! I was at 90% of capacity or higher on every round, and that’s an honest assessment. I should have been going harder rounds 3 and 4, but I softened and got scared I was going to lose my breakfast. If you really sprint 400 meters, you’re a puddle of worthlessness for at least a minute. No way you can recover to 100% of your resting potential in that time, but that’s the point. Going to 100% of whatever your current potential is, that’s the goal of a sprint. No saving up. The only way to get better at maximal efforts is to do them over and over and over again (See John Broz). This counts for sprinting as well.

This evening I was back at the Cite gym, battling for space and sanity in a room filled with neither. Despite these impediments, the workout was awesome. Starting with the EDDs, I was ecstatic to discover that pistol squats are improving dramatically. I’m still not all the way there, but much, much closer. They say practice makes perfect. Maybe they were right.

The close grip handstand pushups felt great as well. It’s still a little awkward trying to generate force from such a narrow base position, but the muscles adapted well by the latter sets. My repetitions per set were: 4, 3, 4, 4, 5. I’m confident that the next time I do this I can get 5 every set. The DB push presses from the knees with a 6 second eccentric were an exercise designed to do 2 things. First: hip drive on the push press, and second: stability/strength through the range of motion on the descent. GREAT exercise. Going to try this with a barbell as well because it will be a very effective way to improve OH press and push jerks.

I finished with the 5 rounds for time of 20 dips and 10 glute ham pushups. Didzis was good enough to hold my ankles for me during this sequence. I finished in 8:34. Because both of these movements are pretty isolated, this was predominantly a muscle failure routine. I was out of breath, but not so terribly that it was in any way limiting. Triceps strength was a factor, especially after all the pressing done early in the workout, and my hamstrings were screaming during the glute hams. I can feel them now, in fact. It’s a great bodyweight test that few people include. My friend Robert from Copenhagen (pictured above) reminded me of them while we were chatting between events last weekend. He's convinced that they are going to really help build strength in the deadlift. I'm inclined to agree.

That's all for now. Getting Olympic tomorrow morning for the first time in well over a month. Could be ugly.

Posted by anywherefit at 8:10 PM