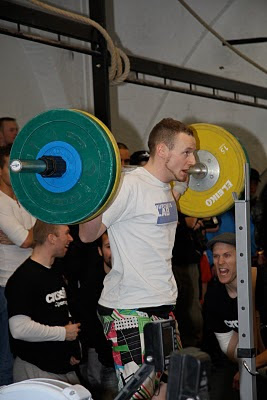 Back in Paris now, and things have not improved on the soreness front. I went with Sarah and my buddies Jess and Lars over to CrossFit Copenhagen to try and stretch out/loosen up a bit, but nothing really seemed to help. Getting off the plane at Charles de Gaulle was a series of stiff and short steps that I was embarrassed to put forth.

I felt a little sad to leave Denmark today. Between this past weekend and my time there last November, I’ve really grown to love the place and the people. In particular, Sarah and her husband Frederick have become people I greatly admire and respect, and whose friendship I can’t value enough. Attachment is funny that way, I guess. It’s hard for me to be satisfied with knowing people like them and others with whom I’ve grown close without resenting the limited contact our geographical differences allow us. I think it says a lot about the city of Copenhagen, the CrossFit community there, and about people like Sarah and Frederick that I can feel an emotive connection after such limited experiences. I can honestly say that I miss it, and them, when I'm gone.

Anyways, enough emotional indulgence. Here is the recap of the second WOD...

The second event of the Danish CrossFit Open began about an hour after the first ended. It featured a 2:30 running clock, in which time the athletes had to row 500 meters then do as many repetitions of back squat with their bodyweight on the bar. For me, that total was 83 kg, as determined by our early morning weigh in at the gym.

Going in, this was the event I felt most confident in. 83 kg is less than 45% of my 1RM, so I figured that coming off the rower I should be able to do a sizeable number of these without much trouble. I rowed the 500 meters in around 1:35, not trying to push things too hard and zap my legs as a few others in the early heats had done. The first 3-4 reps did not feel so hot, if I’m honest. The best total to that point had been 20, by my friend Anders from Butchers Lab (pictured above). This is another guy I've grown to really appreciate. He's a great guy, super strong, a serious olympic lifter, and tough like a coffin nail. He finished 20 repetitions by doing all of them unbroken and just barely finished under the time limit. So when I felt I needed to lock out for a count after my 6th rep, I thought I was screwed. However, my legs felt progressively better as my rep count increased, so that by the time I hit 15 things were cruising along. I wound up completing 21 total repetitions and taking first in the event (thought from the video it looks like I get 22 before they call time. Maybe one didn't count). I think I rowed the 500 around 10 seconds faster than he did, accounting for my having more time to complete the squats.

Anders took second and Rasmus third, leaving the gap between my position and second place at just 3 points. This event suited my strengths more than any other in the competition, so I was happy to have won it. The rest of the day would not be so comfortable.