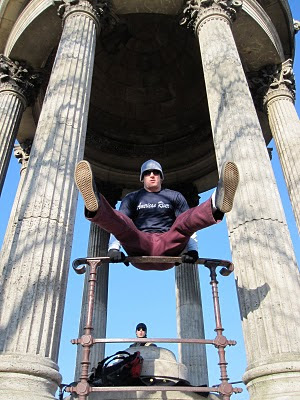 It’s pretty common to describe impressive athletes as machines or beasts, but they’re not. Olympic Biathletes are the same mix of blood, bone, and tissue as everybody else; subject to the same wear and tear, susceptible to the same bumps, bruises, and breakdowns. The most elite CrossFitter’s body and psyche wilts under heavy stress just like yours or mine, albeit at a seemingly much slower rate. The point is, everyone has limits. While pushing them is necessary to progress, ignoring them will put you on the shelf more often than not. And I don’t see too many people PR’ing from the rehab room.

I was reminded of my limits the other night at the Cite gym. I was doing weighted dips, and at some point during my 4th set I felt a twinge in my right shoulder. I shook my arm a little, rotated the joint forward and back, massaged the area (doing all those clinical tests that determine whether an injury is serious or not…) and prepared to get back on the bars. Trying to do the first repetition, I could feel things still weren’t quite right. The pain wasn’t so bad that I couldn’t have continued, but it was awkward enough to make me think twice. This was the critical moment where so many people lose their natural capacity for rational thought and decide to just “work through it.” Thankfully, I decided to call it a night rather than pushing my luck. It was frustrating, annoying, and I didn’t want to do it, but it was the right thing to do. After leaving the gym, it started to tighten up and I could tell that I had definitely strained the muscle to some degree. If I had stayed and continued with the program I had set out to do, things could very easily have gotten worse. As it is, I rested last night, rested today, and it’s starting to feel better already.

It was a pretty simple decision that is easy to justify on a number of levels. The question is, why is this so hard to do for so many people? I have a few theories.

First, there’s the hourglass phenomenon. All too often, people convince themselves that every day not working is a day wasted; as if the realization of their ultimate physical potential depends most urgently upon the number of training days they check off the calendar. Training programs become planned to the point that one is so mentally invested in the process of squeezing everything in that he can’t bring himself to walk away from a bad physical situation. This is so blatantly illogical that a profound ignorance/imposed blindness of physiology is the only explanation. To quote one of my dearest friends and teammates, “you have to rest to progress.” It’s trite, but true. Working every day without recovery, or every week without a break, will keep your body in a constant state of recovery, never reaching 100% of its work capacity. In fact, it will drop lower and lower as you go on, raising the risk of injury as the muscles, tendons, ligaments, and joints wear out along the way. It makes no sense to ask 100% of your body when it only has 60% to give. The human body is born of the natural world, and is governed by waves and periods just like orbits, seasons, and tides. Treat it that way and we find ourselves in a healthy rhythm with huge performance benefits. Treat it otherwise and we grind our gears until they stop.

Second, people don’t know how to listen to their bodies. It takes a good deal of experience to know the difference between pain and injury, and even more to know what types of injuries pose the risk of becoming serious. Knowing the difference between joint pain and muscle pain, between soreness and strains, between physical weakness and mental weakness: these are nuanced senses that you have to develop. Then, once you develop them, you have to listen. What good is knowing that my shoulder just tweaked if I ignore the message and go on pressing like nothing happened? I know too many people who sustain minor injuries to their knees, ankles, shoulders, or backs and refuse to acknowledge the problem. Total shocker: those problems are still there, and they’ve usually led to new injuries in other areas.

Third, most of us don’t know how to deal with injuries once we get them. Most injuries sustained during the course of a given workout are not career-enders. If something serious happens (tear/break/rupture) and you need surgery or extended immobilization, this is obviously a different matter and you’re likely going to be laid up a while whether you like it or not. However, if something tweaks, strains, or pulls, chances are its minor and just needs the right blend of rest, recovery, and mild activity to heal itself. The good news is, the right blend isn’t hard to figure out. Different injuries require different treatments, most of which will include ice, massage/stretching, and mild activity (All these salves are designed to circulate nutrients and blood through the affected area). Talking to others who have had similar problems and using resources online are great ways to find the right method for treating whatever it is that’s bothering you. What’s NOT effective is pretending like nothing’s wrong, or “testing it out” on Fight Gone Bad before it’s ready.

Lastly, people often think an injury is a matter of toughness. This is the unfortunate offspring of a culture obsessed with winning and sacrifice. The stories in American sports alone (the area I know most about) abound: Ronnie Lott choosing to amputate his finger on the sidelines rather than leave the football field to have it treated, Michael Jordan scoring 45 points while doubled over with a stomach flu, Tiger Woods winning the U.S. Open with a torn ACL. These feats are worshiped for their toughness, and for good reason. These were calculated sacrifices for a goal worthy of physical injury, both in dollar amounts and in the commitment to their teammates and fans. What these men did is, and never will be, the same as someone tearing their hands open on a pullup bar at their local gym, then doing 50 more pullups. It’s not the same as gimping your way through a mainsite WOD of box jumps and double unders when you have a sprained ankle. Daily training is about improvement and progress, so what could be the possible benefit of standing on a branch that’s about to break? You risk days, weeks, or months of recovery for the ego boost you got for “toughing it out.”

I’m no cyborg, so I’m going to take it easy the next few days, ice, stretch, and make sure my shoulder is okay before doing anything serious with it. There are plenty of areas that don't involve the shoulder joint where I need work, so it shouldn't be too big a deal if I lay that hourglass on its side. Gotta rest to progress.