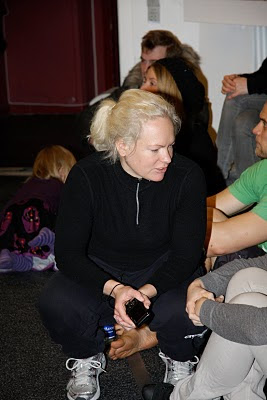 The 2010 Danish CrossFit Open is now in the books and I wound up finishing first. My current state of being is happy but broken. I’m sitting on the couch next to the female champion (Sarah-picture right) watching the super bowl on Danish television, unable to move my legs without pain. Every time I have to stand up to get a glass of water or go to the bathroom it’s a struggle getting down the hall. The workouts, programming, and organization were top notch and the crowd was insane! “Atmosphere” doesn’t do it justice. Needless to say, I’m exhausted and a week of rest is needed.

In recounting the happenings of this past weekend, I’ve decided to break the event up and write about one workout per day over the course of the next 5, and do a general wrap up on the sixth. There’s so much to tell, so I’ll start with the day’s first WOD.

The standards for the shoveling movement were to raise a bar with a 20 kg bumper over a 24 inch box and touch it down on either side without bringing it around the box in the process. The box jumps required vertical extension above the box, and there were no rules for the climbs. 10 minutes wasn’t a long time, but the shoveling movement was awkward and the ropes were thick and slick nylon so it felt like much longer. Watching the early heats, it became obvious that the competition was strong and skilled. Some of these guys climb ropes like I walk through a supermarket: with no wasted effort or time whatsoever. They have inspired me to change my technique entirely. Last years champion, Rasmus Andresen, was especially impressive. He completed 8 rounds plus 16 shovels before running out of time in the first heat. He’s in the Danish special forces, is extremely mentally tough, and I think he could have gone on indefinitely. This was not the case for me. I was able to edge him at the end with 20 shovels on my 9th round, but I don’t think I could have continued much longer. My arms were pretty tired from my inferior climbing technique and I was losing steam.

My number ended up being the highest, so I walked away from the first event in first place. I was really surprised by this and felt fortunate it wasn’t an 11 minute AMRAP instead. Heading back to Paris tomorrow and I’m expecting a continuation of the delayed onset muscle soreness that I’m feeling now.

Below is a compilation video from the weekend.

Posted by anywherefit at 2:16 AM