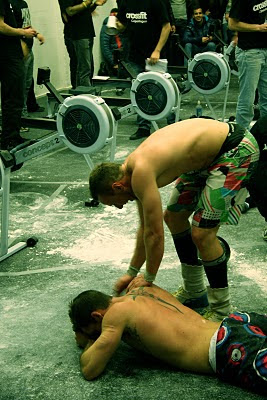 Coming into the final event, the standings were tight. I had a 2-point cushion over Rasmus, last year’s champion, and a 6-point edge over Frederik, the WOD 4 winner. We were set to do 3 rounds of 500 meter row, 21 kettlebell swings w/2 pood, and 15 burpees. It’s a classic CrossFit style routine that would prove crippling after all the lower body taxation that had occurred earlier in the day.

The organizers at CrossFit Copenhagen decided the 5th WOD would be worth double points, making it more dramatic and more impactful than any of the previous 4. This meant that first place would receive 1 point, 2nd would receive 4 points, 3rd would receive 6 points, etc.

A great deal was made about this before the event, since 1st and 2nd were separated by just 2 points. Too great a deal, in fact. Entering the WOD, I was far too focused on beating Rasmus and not focused enough on the workout itself. Perhaps this was a result of misguided strategy, getting caught up in the moment, or my recent lack of exposure to group training dynamics, but it’s a fundamental rule that you can never break without consequences in a competitive environment. This lesson I narrowly escaped learning the hard way.

My plan was to keep my first 500 meters around 1:40, maybe giving a little time to Rasmus, and try to take advantage of my shorter height to make it up on the kettlebell swings and burpees. This worked from the start. Everyone was about even off the rowers, but when we returned for the 2nd round, Martin Moller and I had sidled into the lead. My second 500 meters was around 1:45 and when I hit the kettlebell for the second time I had the lead to myself. Rasmus was still only about 50 meters behind me from what I could tell on the rower, so I was pushing hard on the swings and burpees. Fatigue was setting in, but with the whole day on the line, it was easily an afterthought. I broke the kettlebells in half and the burpees were consistent but not as fast as the first.

I was alone heading back to the rower for the last time and I had already hit 250 meters before Rasmus made his way over. And here is where things went wrong. I was tired. VERY tired. But to this point the competition between he and I was still mentally in doubt. After this point, I knew that my lead was substantial enough to hold him off even if I slowed down considerably. As soon as this mental crack appeared, it widened into physical exhaustion. Suddenly, all the fatigue and pain that was necessary to the cause was no longer essential, and I started to break down. I got off the rower first, but spent a good 10 seconds with my hands on my knees before picking up the kettlebell. I then stopped after 7, 13, and 18 repetitions, respectively. With each of these breaks I could see Martin, Frederik, and Anders catching me at the other end, but their efforts made no difference to my psyche. I was only concerned with what Rasmus was doing and he was still on the rower. I went to the burpees with zero sense of urgency, a fact easily perceptible on film. On the contrary, the 3 guys at the other end were giving it their absolute all, sprinting to the finish. Watching clips of them (from other video sources) is inspiring. With incredible energy, Martin finished first and roared into the crowd. Frederik followed him just a handful of seconds later, and Anders 10 or so after that. I limped in with the same pathetic pace I had set for myself from the moment I knew Rasmus would not overtake me.

Now, one might wonder what is wrong with my approach. Why not focus on the individual upon whose defeat the ultimate victory rests? Fair enough, but what I failed to consider going into the event was that if Frederik finished 1st and I finished 4th or worse, he would overtake me and win the overall. I, in fact, finished 4th. Frederik finished 2nd, and not by much. He was first to the burpees, actually, and it took a mammoth effort by Martin to overtake him down the stretch. All of this was occurring in front of my face, but outside of my consciousness. I didn’t even know that Frederik had come so close to winning it all until that night at the after party when he told me. I was floored. Thankfully it didn’t happen that way, but, in a certain sense, this feels like a victory undeserved. I can look at this as an error in math before the event, that I didn't fully inform myself of all possible scenarios. Or, I can accept that my mental approach was wrong, and it manifested its flaws in physical form during that final round.

Finishing this workout was a real chore, and reflecting on its last 3 minutes or so has taught me a lot. Like has been said before, failure is the best teacher. Pay attention.