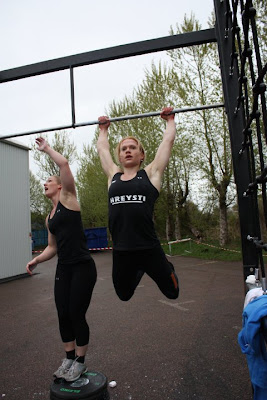 I may not be able to get my head all the way round it, but there’s three things I know about character for certain:

I know it when I see it.

I’m motivated by the individuals who have it.

I sat down the other day and tried to make a list of traits (as they pertain to fitness) that might be the basis of character and I swear I couldn’t find one that stood alone. It’s not effort… That manifests itself in all kinds of spastic, ill-conceived ways that I 100% do not respect. It’s not results… There are plenty of “goal getters” out there who are relatively low quality individuals. Sure, I may have been able to narrow down a couple qualities that were more essential than others (confidence, toughness, honesty, humility, purpose, etc) but the relevant fact remained that none could explain it alone. It’s truly a trait nearly impossible to pin down.

Perhaps this is because it’s a non-static value. Think of character like a multi-trait fluid that, like blood in the body, goes where it’s needed and adjusts its shape accordingly. For example, whether a guy talks a lot during a training session says very little about his character—maybe he’s good enough to date my sister or maybe he’s ready to steal my wallet. But choosing to speak at the right time--when it serves to motivate someone else or to deflect attention away from himself--this quality speaks volumes.

The same can be said for toughness. Most times it means gritting your teeth and training through pain. But others it means swallowing your pride and taking time off to lick your wounds. Mastering this flexibility takes a lot more than a single trait.

Having character is the ability to get this fluid equation right in every situation, even when it’s not necessarily personally advantageous. At the European Regional I watched Annie Thorisdottir absolutely embarrass the pullup bar during the third WOD, butterflying chest to bars like they were nothing. At one point she missed a rep and the judge didn’t see it, giving her credit for a repetition she did not complete. Now, only a few points separated the first 4 positions in a 3 person qualifying event. If there was ever a moment when getting through a workout fast meant everything this was it. Further, it was obvious that she was capable of doing the work, she just came up half a centimeter short one time. Annie told the judge that she missed, got back on the bar and did another one anyways. Obviously.

Seeing this type of thing in an event of this magnitude had an interesting effect. First, it made me respect her tremendously. It wasn’t even that she did the extra rep that impressed me; it was the fact that not re-doing it literally never crossed her mind. That she didn’t hesitate says a lot about what Annie’s made of.

Second, it motivated me to perform on a level worthy of the standard she had set. This is the more important point. The presence of one person in the room who never misses a repetition imposes an implicit expectation on everyone else to do the same. If an athlete finishes first and stays to support those finishing last, everyone in between will also feel responsible to do so. In this sense, character has gravity. It becomes much more than a quality subsumed in a single individual and begins to snowball into something far more impactful.

CrossFit creates many situations that benefit from such a quality simply due to its competitive foundation. It takes a lot of mettle to throw your hat in the ring and risk failure in front of your peers, but the example of one or two willing to lay it on the line eases that burden considerably. Those are the people I respect most. They don’t apologize for wanting to be the best, but they expect the same from everyone else. No shame. No excuses. In competition, they’re grounded enough to take credit when they win and honest enough to give it when they get beat. This kind of perspective in the fitness community inspires people to be better than they otherwise would be. They begin to expect the same level of confidence, toughness, honesty, humility, and purpose from themselves that they see in the leaders around them.

If there’s one reason I’m excited about going back to the CrossFit Games this July it’s not because I want to win $25,000, although that would be nice too. The bigger draw is to be surrounded and inspired by a stadium full of these types of people.