For training on Day 2 we spent the morning at CrossFit Tuluka.  Very hospitably, they opened their doors to our group and allowed us to rope off a small section of their box for a special workout to celebrate Matt Mizinski's 23rd birthday.  Everyone partnered up with someone of similar strength, decided an appropriate weight for the pressing complex, and jumped into it.  Because we were working alongside the regular class, we didn't have access to a main clock, making this one more for completion than for time.  The idea behind the workout was to make the weights heavy enough that one couldn't breeze through 23 unbroken reps of everything.  Rather, sets of 3-5 were intended to make it feel more like a strength workout rather than a conditioning one.  After yesterday, we didn't really need another lung burner. 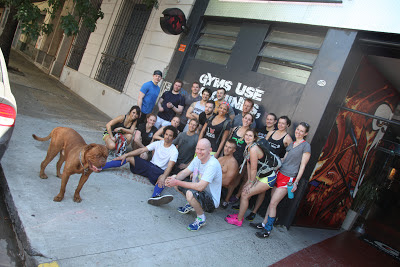 Hardest part of this workout is definitely the push press.  It's so easy to want to re dip and jerk the bar up, so staying tight and tall in spite of this urge is difficult.  Also, if you're partner 2 you're coming into these sets after already having done quite a bit of handstand pressing and pullups.

The atmosphere was great in Tuluka for the workout and the coaches very friendly and accommodating.  It's got some of the best interior signage I've ever seen in a crossfit box, with arguably the coolest signature logo.  Well, maybe 2nd coolest.  Definitely a great experience training there and looking forward to stopping in again before we leave B.A.

We had a free afternoon with an optional 2nd workout to take place around the corner from our hotel.  Sven had spotted an old demolition site on our run to the park yesterday and rallied 12 of the group to go throw stones in the yard.  Using different size boulders and blocks, everyone made attempts at throwing the objects overhead, sideways, from the chest, and for height.  The idea was to train power production with non-traditional objects.  I had to miss this excursion, unfortunately, but as they were almost finished a couple of local police officers popped in to see what was going on.  In no time, they had the entire group up against the wall threatening to take the whole lot to jail.  Turns out they were just looking for a bribe.  So, when it was discovered that no one had money to give them, the group was turned loose with a stern warning and a great story. 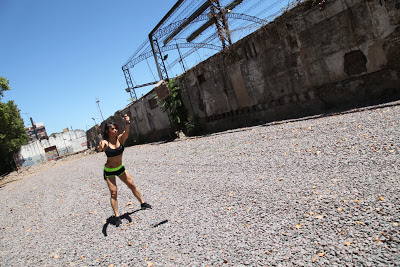 But even this excitement couldn't prepare us for what was to come in the evening.  On a whim we agreed to purchase tickets to the Bocca Juniors futbol match versus Quillmes.  Included in the ticket price was bus transportation to and from the stadium, beers and pizza at a nearby bar beforehand, and the bleacher seats in the craziest section of the stadium.  Now, I've been to a few soccer matches in my life, but NOTHING compares to what we experienced here.  The game itself was phenomenal: 2-0 deficit within 6 minutes, a blocked penalty kick with 10 minutes to go to keep the score tied at 2, and the game winner off a side volley from the top of the box with 5 minutes to go.  Honestly, couldn't have hoped for a better showing by the home team.

Better than the game, though, was the atmosphere.  No exaggeration, these people didn't stop singing the entire game.  Can't say I know what they were saying but it was loud and constant.  We were fist pumping, jumping, or clapping at all times.  No one sat down--no one could sit down because there was no room to--until half time.  I'm not kidding when I say being a fan of a team here is a full blown workout.  And the sheer noise of it is hard to believe.

From start to finish we were on this adventure for approximately 7 hours, but I wouldn't trade it.  Such a cool experience.
Posted by anywherefit at 3:40 AM