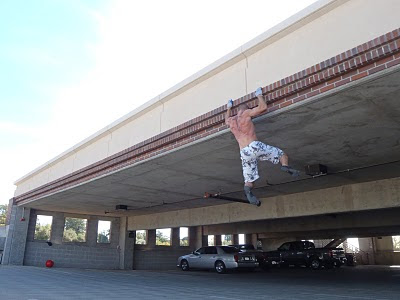 Done with a partner:

Today’s workout took place at Midtown Strength and Conditioning down on 3rd street in Sacramento. Camillo and Tara organized a group session in honor of one of their member’s wedding celebration later in the day and I happily joined in. John and I got there just at 9 am and the workout kicked off not long after that. I teamed up with Spike (groom to be) and Camillo divided everyone else up with suitable partners. Angel was there capturing everything on film and doing pre and post WOD interviews with his baby strapped to his chest in a Baby Bjorn the whole time. Classic sight.

Spike and I paced ourselves well on the run and went right into the box jumps when we got back, breaking them into sets of 20 between us. The ground to overheads were a mix of snatches and clean and jerks, and the pattern of repetitions didn’t hold too consistently. But we were still right at the front of the pack moving to the pullup bar. We mowed through these and the GHDs in short order before heading over the rings. Here we came to a grinding halt. Spike had only just done his first MU earlier that morning and I could only do one at a time. Needless to say, our lead began to evaporate.

John and his partner, another fireman named Jared, ate up our cushion quickly and were just 2 MUs back when Spike and I finally finished our 20. We took off on the run and set a hard pace hoping it would be enough to carry us home. It was. We finished in 23:07, about a minute ahead of the next group. Afterwards everyone hung out and cooled off in the perfect morning air outside the gym. So much fun to be included in a group as great as the one Midtown has built. Hopefully it won’t be long before the next time.

All the best to Spike and his wonderful bride to be, and I’m looking forward to the video footage of the session whenever it surfaces. Also, 2 more monument submissions… one including a pretty hilarious encounter with a park ranger. The links are below.

Posted by anywherefit at 5:26 AM