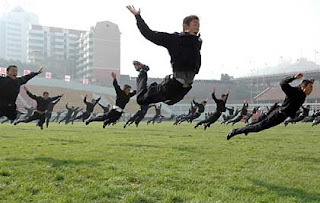 Was feeling surprisingly sore between my shoulders blades this morning. In explaining this, I’m leaning towards the power cleans. I think pinning my shoulders back during the movement and really pulling hard may account for it, but who knows. Could’ve been the rope climbs too.

Today’s WOD was short and sweet. After working through my EDD’s, which I can already see improvement in after 3 days, I headed into the Olympic room where I could get some space to do the burpees. My previous best time was 4:56, clocked the last time I did this back in Washington in the spring. Then I wasn’t so strict on form, so I tried to be better this time. My standards were:

Vertical finish at the top with hands overhead and some visible space under the feet. Horizontal position at the bottom with the sternum touching the floor.

The first 40 went off unbroken and I was feeling pretty good. By the time I reached 55 things were getting much tougher. It only took me 2 minutes to finish the first half, but my pace was slowing considerably due to heavy legs and heart rate. I decided that slowing down a bit was okay so long as I didn’t take any real breaks. That worked until I hit 70, where I rested for 2 breaths. By 85 I had hit the 4 minute mark and I knew it was going to be tight to finish under 5. As is always the case, once nearing the finish the body has an extra gear and I finished the last 15 quicker than the 15 before them, stopping the clock at 4:47.

This felt exactly as I remembered it feeling. Not Fun. It was short, intense, and exhausting. But it was fun to push my limit and get a new best time. The video is below.

Posted by anywherefit at 5:28 PM