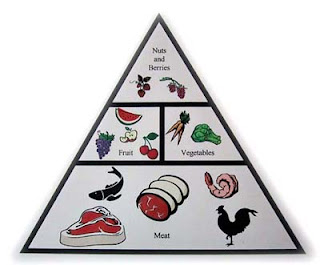 I am nearing the 10 week mark since my shift to a more Paleo form of nutrition. As we are approaching the New Year and many of us will be contemplating changing the way we eat for 2010, I figured this was the time for some reflection and honest evaluation of what impact this diet has had on me personally.

For those of you who are not familiar with the Paleo concept, it’s essentially the idea that the evolution of human digestion was anchored around foods that could be easily found and caught (fruits, vegetables, fish, lean meats, etc). Only very recently have grains, legumes, dairy, and refined sugars entered into the mix through the ascension of standardized agriculture and farming. This diet proclaims that our bodies have not adapted to these alterations and are still best equipped to process and utilize the foods of our prehistoric ancestors. (This is a rudimentary explanation. For more, visit http://www.thepaleodiet.com/).

My reason for adopting this plan was equal parts logical reasoning and curiosity. The basic premise made sense to me, so I had no issues accepting the scientific claims made by many of its leading proponents, and I was curious to see how much of the buzz around this diet was rooted in tangible benefit and how much of it was hype.

Going in, my concerns centered around the grain question. For the past 3 years, brown rice had been a staple of my diet, forming in my mind the perfect complex carbohydrate. It was cheap, full of fiber, and tasted good with just about everything. I was skeptical about what my meals would look like without the likes of brown rice, quinoa, lentils, etc, and wondered where I would make up the carbohydrates and the calories I would lose from their omitance. Actually, this hasn’t been so difficult to deal with. I’ve made up the difference by eating a lot more fruits and nuts than ever before (which I like), and during breakfast and dinners I eat potatoes and yams. Honestly, I haven’t missed the grains.

Dairy was a similar issue. I was used to eating Greek yogurt, cottage cheese, and drinking milk. With the exception of hard cheeses, I’ve completely eliminated dairy from my diet without much trouble. Cheese has remained to some degree because it’s so prevalent in Holland and for some variety between meals.

Overall, adapting was much easier than I expected. The biggest issue is that which I just mentioned: variety. I do feel that I eat the same things over and over again, and that gets a bit boring. But this may be more a factor of my situation (no money, small market, small refrigerator) than of the diet.

As far as the effects go, they have been subtle but significant. Within a few weeks I could see a difference in body composition. My muscles were harder, leaner, and more defined. I’ve also felt generally less tired during the course of a given day. Those random exhausted moments I would feel just after lunch no longer exist. I actually didn’t even realize this development until I was out of town one weekend and resumed eating the way I used to. Felt like I needed a nap while touristing—not convenient.

I’ve felt some measure of increase in my work capacity during exercise. For example, during metabolic conditioning WODs I find that I’m able to work further into the routine before taking a breather than I used to. Now, it’s tough to say this is more a result of fuel than just the progression of my training, but I figured it’s worth noting.

Where I was initially disappointed was the strength gains everyone talks about. Actually, until very recently I had seen/felt no real improvement in strength exercises. But, in the last 2 weeks something has happened. Everything feels stronger. I’ve set PR’s in Power Clean and Power Snatch. I am deadlifting more weight for repetition than I ever could before, and my bodyweight skills have felt easier and more controllable. Again, this could be completely unrelated but it’s worthy of mentioning.

The biggest challenge, for me, is eating enough. I have to remember that while the quantity of vegetables I’m eating looks like a lot of mass, it’s mostly water. When I eat the proper quantities for the amount of calories I burn, things work better than they ever have.

I read an article from the Paleo page the other day regarding how strictly one must adhere to see results. They advocated an 85/15 split, which seems more than reasonable to me. Most diets require exactness and precision otherwise all bets are off. I respect this practical approach, and think that it is proof of the confidence users feel in its effectiveness. Given what I've experienced, I see no reason to change back to the way I ate before. My impressions are positive.

Now, this is not going to be easy in the new year. I’ve heard many tales about nutritional challenges in Paris, so it will be an interesting term when it comes to food… I’ll give another update in a few months detailing how cavemen fare in France.