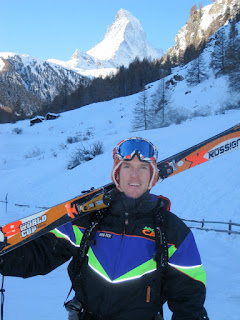 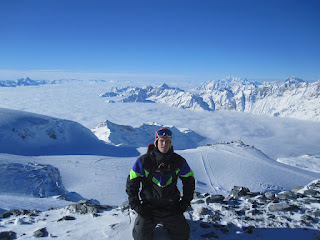 Ski moguls and get trapped in Italy

No soreness this morning, shockingly. Apparently all of my whining and concern over yesterday’s rough runs was unwarranted. So, Tate and I grabbed a quick bite to eat then headed out back behind our hotel to get the blood moving before another day on the slopes. Due to limited space, we did the workout separately while the other filmed and timed.

The biggest factor in this workout was the altitude (Zermatt is about 6000 feet above sea level). The muscle ups were challenging because we chose a spot were the wall met a ledge, making foot placement awkward but not impossible. The OH squats were no problem because the skis probably only weighed about 10 lbs. That extra weight made a huge difference on the burpees though. First, just holding onto the skis for the duration was tough. Then, having to lift them overhead while jumping was no fun. I recommend trying this with some other reasonably light object so you can feel the difference. It’s significant. At this point my breath had left me, and it was time for the bear crawls. The path we carved through the drift was narrow and not too well packed, so hand placement was hit and miss. One step would be solid earth, the next would be a 20 inch air pocket (read: face plant). By the 50 meter mark my wind was completely gone, and the reverse portion posed the same problems as the forward version, just with a slight incline. This took forever. I think 4 minutes of my total time were spent fighting this element. When I made it to the end I put the skis over my shoulders and ran with what I had left in the tank, finishing in 11:10. Tate, going first, experienced the same issues as I did for the most part, and finished in 11:53. He, however, lost his ham and eggs just after finishing the ski run. I think the extra 12 minutes of digestion time did me a few favors in that respect.

After about 20 minutes back in the room, we grabbed our gear and headed up to the Matterhorn glacier for another day of fun. Thankfully, the sun came out so we could see the contours of the runs. It is impossible to describe the beauty this place offers from up on top. I’ve included a few pictures to try and capture it, but they don’t do it justice. The sheer size of the runs is unbelievable. We rode one combination of runs continuously for 1950 vertical meters. That’s over a mile of drop and god know how many actual miles of ground covered in a single shot. My legs were screaming all day, just like yesterday, but the bright sun and gorgeous scenery made it feel more bearable.

It was, in part, because of these surroundings that Tate and I got ourselves into a bit of a predicament by the end of the day. After splitting with my grandfather after lunch, we headed down the Italian side of the mountain to ski there, and wound up missing the last lift back over the top. They closed at 3 pm and were not impressed with our pleas for one more chair. So, we had to find a hotel room in Cervinia for the night, or take a 500 euro taxi around the mountain back to Zermatt. The option we chose should be obvious.

Below is a video from the mornings workout.