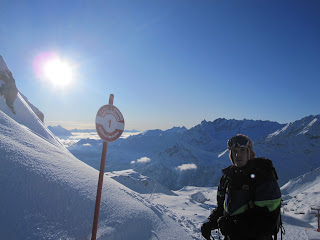 Tate and I got up early to take advantage of the continental breakfast at our Cervinia hotel and get to the lifts when they opened at 8:30. We wanted to give ourselves a chance to make it over top and into Switzerland before I got charged for another day of use on my skis and boots. Being the first ones on the mountain has its advantages and disadvantages… On the plus side, the snow is fresh and un-mogulled. On the minus side, it’s cold and icy in the spots where the sun has yet to reach. Our route down to Zermatt required us to navigate a few pretty serious runs in the shade, including 2 narrow-width black diamond stretches along the cliff. While we made it down unscathed, I did take an enormous header along the way that is worth mentioning.

I was feeling good and carrying a lot of speed through much of the early legs in an effort to beat the rental shop. This caught up with me when we came to the bottom of a hill where two runs split from each other, one continuing straight and the other inclining slightly to the left (where we needed to be). I tried to cut into the hill and make the left fork, but I had waaaay too much speed for the turn that needed to happen. Instead, my trajectory ended up carrying me between the two forks, where I buried my downhill ski into the dividing snow bank and launched myself at least 30 feet in the air into the powder. When I got up my visor was around my neck filled with snow, my right ski was in the snow bank where it impacted, my left glove and pole were 15 feet up the hill to my left, and my face guard was stuffed into my jacket. I am honestly jealous of those lucky few on the chair lifts this morning who witnessed this spectacle.

The rest of the day was spent packing and travelling back to Paris. It was another incredible weekend that tested me physically and reinforced the need and importance of fitness in my mind. Even on holiday, it pays to have done the work.