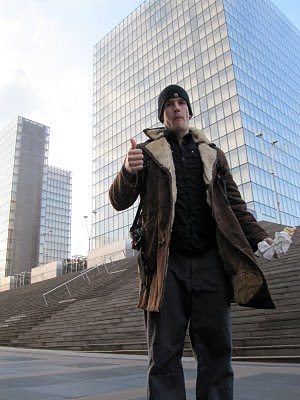 This weekend I was visited by Jason Mulligan, an individual I had not previously met or had any real correspondence with. He was in Berlin 2 weeks ago visiting with Florian, Alex, and the rest of the gang I met in October and he mentioned he was heading to Paris. Naturally, they told him to look me up; and the rest, as they say... well, you know the rest.

Jay is a U.S. Army captain who has been stationed in Germany for 4 years after graduating West Point and serving in Iraq as a tank commander. In addition to this impressive resume, Jay played college baseball, boasts a mean Long Island accent when appropriate, and LOVES CrossFit. Think we hit things off immediately?

While he was in Paris, we talked nutrition, training, and college sports; we trained under the Arc de Triomphe and the Rue D’Arcole Bridge; and we shared the growing impact CrossFit has had on our respective families. It was fun to see how quickly we gelled around fitness, but equally cool to notice how many common interests we shared that were not fitness specific. I told stories from high school, college, and since. He talked about his time in Iraq and the relationships he cultivated behind enemy lines. We sampled Parisian nightlife, rummaged through second hand stores in the Jewish Quarter, and semi-crashed a French dinner party. It’s not hard to imagine the damage we could do if we ever found ourselves living in the same city.

The point is, here’s a guy whose interests, personality, and general outlook mesh very strongly with my own, but we could very easily gone our whole lives without meeting. There are quite a few birds of a feather not flocking together in the world, plenty of lives running parallel yet never intersecting. I’ve heard it said that in an age of unparalleled communicative technology and interconnective capacity, humans are still, today, lonelier than ever before. This is obviously not due to limited resources… Email, Facebook, Twitter, YouTube, Blogspot, Skype: these tools constitute a superhighway of interactive potential. The issue is orientation. Without a compass, a system of roads this complex could literally lead anywhere. More often, they lead nowhere.

In this case, as in many, fitness was a homing beacon. Blink.

The emotions, insecurities, successes, failures, and truths that drive one of us to train, usually drive all of us to train. There’s an irresistible magnetism in it that may be my favorite aspect of training, and of CrossFit specifically. The qualities of group cohesion that develop between friends, family, strangers, even amongst people who have never met, or will never meet, are truly astonishing. In their individual pursuits of personal goals, people develop the strength and confidence to share their experiences with the broader group, to encourage those fighting the same battles and overcoming the same obstacles that they have fought and overcome. I’ve written more extensively about the reasons for this cohesion before, so I won’t re-argue why this type of exercise builds bonds as strongly as it does. But I will re-iterate that these bonds are REAL and that the people building them are looking for more.

And why not? With the highway already laid and our collective consciousness continuing to converge, I fully expect to meet more people like Jason going forward. I relish the opportunity. CrossFit has grown into a global community, literally unbounded, and if my experiences thus far in Europe are any indication, there are plenty of blinking lights left to be discovered.

I will admit that, chances are, I won’t gel with everyone as easily as I did with Jay this past weekend. And sharing a single passion is certainly no guarantee of an instant and lasting friendship. But it’s a place to start. And if my alternative is to navigate the road using only the stars on a cloudy night, I’ll take that compass every time.