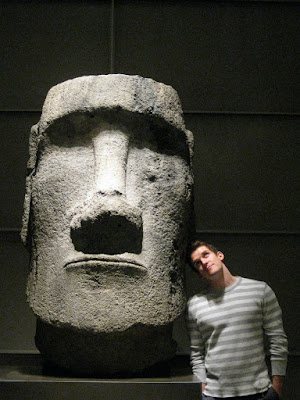 Today’s workout was great! Even in a massively over-crowded Cite gym (smelling like hell to make matters worse) Niels, Eva, and I were able to get a really good session in. The DB sumo deadlifts were a nice deviation from standard deadlifting styles. By pinning the two dumbbells against one another it was possible to get full depth and full extension while keeping good body posture and tilt. 32 kg are the heaviest dumbbells I have access to, but I think that was actually a perfect weight. I’d say do it with 2 pood kettlebells, but I don’t think the depth would be low enough so stick with the DBs.

The first set of 20 felt pretty good. My ass and hamstrings let me know they were there, but I managed to get them out unbroken. The chest to bars offered little trouble as well, so I was feeling pretty confident. The second set I had to break at 14 because now my ass and hamstrings were doing more yelling than telling. And the pullups got tougher as well because my grip was now starting to tire. Coming into the 3rd set the clock was just past 3 minutes of total time elapsed. Here, the grip and the legs were big factors, as they would be the rest of the way. It took me 3 sets to get the 20 repetitions and I could really feel my lower back starting to ache—a testament to high repetition deadlifting for the first time in a while. Also, my arms were failing to cooperate past 3-4 pullups at this point. By the end of the 3rd round, 5:30 had passed; by the end of the 4th, 8:30. The last round I got a burst of strength on the deadlifts and got through them in 3 pretty quick sets. I also decided to do one pullup at a time instead of trying to string them together and blowing up my already exploded arms. This worked really well. I definitely did the 10 c2b’s faster than set 4, and maybe even faster than set 3. My final time was 11:23.

Niels is really looking stronger as well. He finished in 13:20 with 20 kg dumbbells and was much improved on the pullups. It would be fun to see what he could do if he worked out more than twice per week…

We rested no more than 5-6 minutes, then hit the bench. This was meant to be an exhaustion exercise tacked onto the end of the routine to see how tertiary muscle groups would respond under fatigue. My totals for the 4 max rep sets were: 20, 11, 8, and 9. The rise on this last set was because I got caught explaining an exercise to another patron of the gym and incidentally received an extra minute of rest.

Overall, I really enjoyed this program. The dumbbell deadlifts were especially fun, and all the exercises challenged parts of my fitness that could not be considered strengths.

Tomorrow I’m embarking on a 4 day roadtrip through southern France with a few of my classmates. Hoping to find some cool spots along the way, in addition to the places in Nice my friend Kasper has already recommended. Not sure what the internet situation will be at the hotels, but I will try to post pictures/videos/etc. when I can.