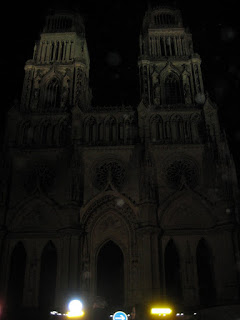 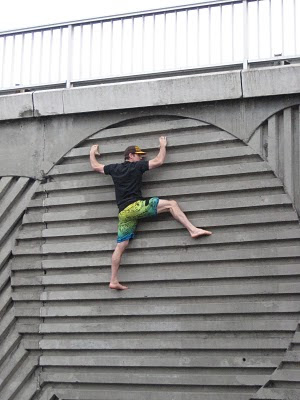 We hit the road Thursday evening around 5pm heading south from Paris towards Orleans. Our original plan had been to stop in Chartres to see the Cathedral there, a building famous for its asymmetrical towers, massive height, and for housing the Sancta Camisa (the tunic Mary wore when giving birth to Christ). Unfortunately, we had to forego this leg of the trip in the interest of time and pushed on towards Orleans without delay. Driving in France is a bit different than driving in the States, mostly because the signs don’t tell you which direction the road is going, only towards which city it’s headed. Also, the highways all require tolls if you want to be on a road with a speed limit over 100 kph. We tried to avoid the toll and take the national roads during this first leg but quickly realized that the national roads hit every town along the way and were poorly marked if marked at all. Needless to say it took us longer than expected to reach our destination.

When we did arrive, however, we were treated to a mid-sized city with full-sized charm. The city center was immaculately clean, with beautiful gray stone buildings extending in all directions. We came across a giant fountain honoring Joan of Arc just in front of city hall, most likely because Orleans was the site where she led the fight against the English during the 100 years war that gained her fame. Towering over all was the gothic monolith of Cathedral Saint Croix (above right). I was thinking we were about to walk up to it, but its proximity to us kept getting distorted by its size—same effect that makes walking the strip in Vegas seem so easy when in fact it is not. When we finally did reach it, the square was literally empty (a far cry from the square at Notre Dame in Paris this time of year). If I hadn’t been so tired from the day of driving I think this location would have been ideal for a bodyweight WOD. As it was, though, we just walked around and enjoyed the view.

In the morning we hit the road early in the hopes of reaching Avignon before dark. According to the map we would be driving through a lot of countryside, so I anticipated getting a workout in somewhere along the way—perhaps utilizing the rope I had packed in the trunk. Unfortunately, during our lunch break in Clermont-Ferrand our car got towed by the shockingly efficient French parking police. Apparently we left the Citroen in a space it ought not to have been and because we had to retrieve it from the local towing agent after paying our fine to the commissariat. 90 euros. Ouch. The bigger issue was the time we lost. This meant that we would not be able to stop on the way to Avignon. While waiting to get the car I climbed around on the side of a highway overpass that featured a strange circular design with little ledges (above left). Not much of a workout, but fun physical activity nonetheless.

We ended up making it to Avignon after dark, but it was probably better that way. The views of a medieval walled city lit up at night are pretty priceless, after all. More about that in the next post.

Posted by anywherefit at 6:11 PM