Trans-Continental Workout #6... and then some 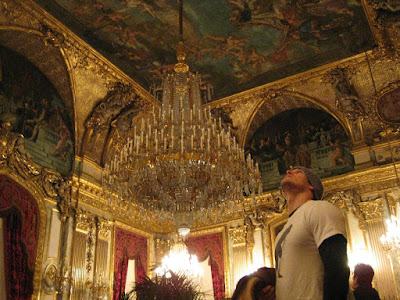 3 rounds for time at the Louvre:

BIG day today. Library early, museum late… lots of training in between. Suffice it to say that I am beat and ready to sleep until Sunday.

Things began with the 6th installment of the trans-continental workouts I’ve been doing with my boy Josh back in DC, consisting of a decreasing pyramid from 10 to 1 of 145 kg (319#) deadlifts and muscle ups. Before embarking on this adventure, however, I did some overhead pressing to test where my strength was at.

Therefore, I had all kinds of energy heading into the challenge a few minutes later. Unfortunately, there were a few limitations imposed by my gym. Namely, I had to tie my rings up on a wall mounted pullup bar that only extended a foot or so from the wall. This meant that I could get no real swing for my kip. All the hip and knee drive had to come from a dead hang position, and I couldn’t string any of them together back to back. This certainly made the workout harder than it otherwise would have been, but it made the muscle ups more of a strength move than a technical one, which isn’t so bad if you're trying to get strong.

The first 10 deadlifts were smooth (the weight didn’t feel heavy—happy about that), and I knocked the 10 muscle ups out in singles without any trouble. The set of 9 deadlifts felt considerably heavier, and the muscle ups took far longer. This trend would continue as my grip began to tire, my back began to weaken, and the class of students began to pay more attention to my banging around the gym. Things really started grinding from set 8 to set 5, but picked back up for the last 4, and I stopped the clock at 24:00 exactly. I think that I could have finished under 20 with a standard set of rings without question, so that would be the number to shoot for next time I do this. Unfortunately, I don’t have video footage on this WOD, but hopefully Josh does for his part. Courage Performance Blog

Later in the evening I joined my good friend Beth from DC over at the Louvre for our version of night at the museum. I’ve been wanting to do a workout here for awhile, and tonight was perfect. Things didn’t quite measure up to the standard I had hoped for with the handstand walking (turns out I'm still no gymnast), but the location was so unreal it didn't matter. The courtyard was lit, the pyramid was gleaming, the air was nice, and there were people out to enjoy it all. If you haven’t been to the Louvre at night, make it a priority.

I went through the 1st round pretty well, only falling twice on the handstands during 20 meters and making it through the double unders in 2 sets. The second round was a bit worse, as it probably took me twice as long to walk the 20 meters on my hands. But the third round was where things really fell apart. I came into it at 8:30; I came out of it at 14:14. I just had no balance left. My core was unsteady, my shoulders were shot, and I didn’t have the concentration to pull my shit together.

Still, I loved the workout—this kind of thing, you can literally do anywhere. Big thanks to Beth for filming, doing a workout of her own after I finished, and then walking around the museum with me until closing time (picture above is from Napoleon III's grand salon). All in all, an incredible night.

The video of the handstand WOD is pending upload on youtube and should be ready tomorrow.