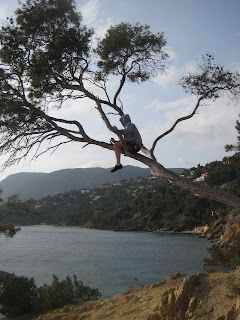 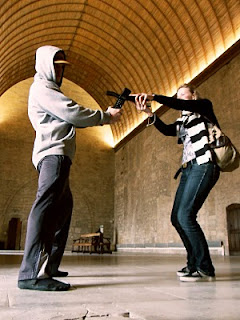 Avignon and the road to Nice:

We got up early on Saturday to go explore the Palace of the Pope and the renowned Avignon bridge before hitting the road for Nice. Good thing, too, because the Palace is built more like a medieval fortress and is every bit as large. (For more read here: http://en.wikipedia.org/wiki/Palais_des_Papes). We walked through ancient prayer chambers, 60 meter long dining rooms (above right), frescoed chapels, and beautiful courtyards where cardinals used to cloister. We even saw the papal kitchen (essentially a huge brick room tapering to one giant chimney above). But the staggering thing for me was the number of stairs in the place. NOT wheelchair friendly back in the day. It seemed that between every room there were either steps up or steps down to the point where it felt like the place had about 10 different levels, few of which matched up with any others. To think that those stairs were climbed for over 350 years by the succeeding heads of the Catholic Church, albeit controversially designated at times, was mind blowing.

After a few hours of Papal history we strolled down to the Avignon bridge, famous for its abrupt incompletion halfway across the Rhone River. Apparently, years of flooding and debris kept corroding the pillars, forcing the inhabitants to habitually rebuild the structure with substandard materials. Finally they decided it simply wasn’t worth the effort and abandoned the cause in the late 17th century. (For more read here: http://en.wikipedia.org/wiki/Avignon_bridge). About halfway across the existing bridge there still remains a chapel built into one of the columns. Mostly a home to pigeons now, this has to be one of the more unique places of worship I have ever seen. It’s strikingly simple and plain, but its location gives it the impression of floating above the water. Very cool.

The bridge also offered plenty of opportunity for a little physical adventure, though the fact that it was a museum left me a little hesitant to do anything too sacrilegious. I did, however, find a doorway over which a stone could be used for close grip pullups, so I did a few sets of those (video below). The bridge itself would make for a really fun bodyweight/swim/climbing routine because of its sheer drop into the river. I imagined a scenario where one would do 50 burpees on the top, jump off the bridge into the water (30 feet or so) and swim to the opposing bank (maybe 600 meters), do 50 burpees, swim back to the bridge, climb the exposed bricks (very easy holds), then finish with 50 burpees. Obviously this would never fly with the citizens or curators of the bridge’s museum, but it was fun to think about.

After lunch, we headed off towards Nice on the French national roads and quickly reached the coast just East of Marseilles. From there we drove along the Mediterranean through Toulons, Saint Tropez, and Cannes before reaching our destination. Wow, what a drive. Very reminiscent of coastal routes in California, just with a much older, less suburban dubdivision feel. We stopped a number of times to soak up the scenery that was, in a word, stunning. Particularly beautiful was Pont de Layette, a random pull-off along the road between towns that featured stairs down to the rocky coast below (above left). There was a small sand beach facing west where a handful of people and their pets were enjoying the sunset, and a beautiful bluff point with a 300 degree view of the mediterranean. We probably spent an hour relaxing here while dusk settled over us. There were trees to climb, tidepools to explore, and endless rocky shoreline to admire. It has to rank as one of the top 5 prettiest places I have ever been.

We arrived in Nice around 8 that night, somewhat reluctantly after our wonderful experience along the coast, and hit the town for some sushi and a few drinks. We didn't stay out too late, instead crashing at the hotel in anticipation of a long Sunday at the beach. While the weather had less than ideal plans in store, I did find an incredible location for a workout thanks to a recommendation from a buddy in Copenhagen. Still putting that together, so stay tuned.