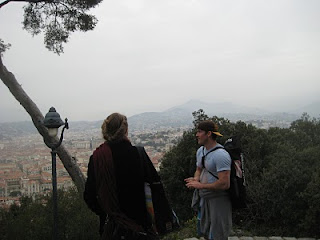 Heading to the beach Sunday morning I had every intention of doing a workout in the water. I had imagined a swim coupled with some sort of sand running and lifting a heavy stone. Unfortunately, Nice is a rock beach and the cloud cover never lifted long enough to make swimming a non-hypothermia situation. Still, the promenade was impressive and it stretched the entire length of the bay. I took an exploratory jog towards the east end where my friend Kasper had told me to look for a set of stairs and war monument to France’s fallen. Sure enough, just as the coastline ended a huge set of stairs emerged. After climbing them and admiring the incredible view, I stumbled upon this incredible waterfall overlooking the bay. To one side there was a low hanging tree perfect for a set of rings… Bingo.

I headed back to the beach where I’d left my friends to grab my bag and get started. The workout was simple, but very challenging. 2 rounds running up the stairs (385 of them), the first carrying my 12 kg bag and the second without, followed by 10 muscle ups, the first with the bag the second without. Maurice got some great footage of me as I reached the top level of the climb and during the muscle ups. Sadly, Eva’s film of the actual climb did not come out, so you’ll have to take my word for the severity of that portion. So beautiful but so tough.

In total the routine took me 12:59 to complete. The best part about this was the muscle ups with the pack. It’s about the same width as my back so it didn’t get in the way at all, just made things heavier. I’ve attached the video link below.

We spent the rest of the day relaxing and wandering around the town, which reminded me a lot of south Florida. There were tons of retired people and tourists everywhere, giving it a much different feel than the other places we had been on the trip to that point. I can only imagine how packed it must be in the summer when the majority of the workforce takes their holiday.

The next morning we were up and off before 10:00, trying to hit the road early to lessen the pain of the long drive back to Paris. Along the way we stopped and saw the Chateau de Rochepot, an unbelievable castle nestled in the central French countryside. Before we left I tied up my rope to a nearby tree and did 12 sets of climbs. I was trying to work some foot technique and to be more efficient up the rope to save strength in my arms, so this workout didn’t necesarily take the form of a WOD.

After that it was nothing but asphalt the rest of the way. We made it home just before 10 pm. What a great trip. I really didn’t want to come home.