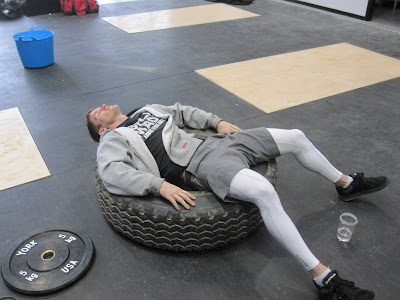 Tuesday morning I took to the rails and ventured up to Manchester to visit CrossFit 3D and CrossFit Central Manchester. I was met at the station by Pete, a new friend and training partner who frequents both locations as a coach and athlete. Pete qualified from the UK sectional last month for the European Regional in Halmstad but isn’t going to be making the trip. He took me on a brief driving tour of Manchester before dropping in to Central’s box to say hello. We were met by Simon, owner and operator, and chatted for a bit. Their facility is located beneath a rail arch, very similarly to the space I saw at CrossFit Central London. The plan was to head back in and train with Simon and co. the following day, but, as I will explain, circumstances didn’t permit this return visit.

From there we headed to 3D, a new facility opened by Karl Steadman in south Manchester. It’s in an industrial park well within sniffing distance of the local brewery. Due to this, open door workouts are privy to wonderful aromas—smells like a fresh bread bakery out there. Pete and I began training with his boy Jaime, a 3D regular and 2009 Games competitor. I worked rack jerks, Pete did front squats to jerks, and Jaime worked snatches. I felt pretty strong overall and ended up setting a personal best at 135 kg. I tried 140 kg twice but neither was clean or close so I let it alone at that.

Afterwards we headed out to the parking lot for a strongman circuit that was simply crushing. Using a prowler sled loaded to 170 kg, a 20 m length of rope attached to 40 kg flat sled (plus 75 kg Karl riding on top), and a 60 kg sand bag, we did the following for 3 rounds:

My times were 1:21, 1:31, and 1:29. I hated this and was on the ground for a good while afterwards. Pete and Jaime were not far away, equally sprawled. Hard to imagine such a short interval being so completely exhausting, but such was the case. It was actually a bit comical how wiped out everyone was.

I rested about an hour then joined Karl’s 7:00 class for their MMA inspired Fight Gone Bad mash up.

I felt great throughout this routine. My recovery was good during the 1 minute break and my numbers for each 5 minute block were surprisingly consistent: 190, 189, 191. All told, it was a great afternoon with some great guys who know how to push it. A few of us headed out for a beer and dinner afterwards and they helped me get set up with plans to visit the city of Chester the following day (ancient city with Roman walls still intact). The plan was to return the following afternoon to say goodbye. That, however, did not happen.

I arrived in Chester by 10:30 the next day, expecting a little sightseeing before heading back to Manchester to train with Simon. Walking about, I quickly found the famed wall—super cool and impressive. The northgate area, especially, has been preserved and refurbished to perfection. Along my walk I did some weighted pullups and weighted inverted rows from the undercarriage of a low hanging railway bridge, kind of peaking my exploratory interest. Then, as I was walking along the old moat, I came to an area of the wall that looked quite climbable. It was only 25 feet or so to the top ledge and there were a couple of locals hanging out below encouraging me so I figured I’d give it a shot. The first sign of trouble was the looseness of the dirt covering much of the ancient wall. To all those reading: DON’T climb on loose dirt. I took my time and worked what was a relatively simple line up the wall until I was literally on the top ledge. Then, just as I was pulling myself up, the hold under my left foot gave way and I was sliding backwards fast. I bounced a little on the ledge blow and my slide turned into a freefall to the walkway and the locals below. I managed to land fairly square on my feet and absorbed most of the impact without endangering my head or back by crumpling quickly and rolling. However, it was still a 20 + foot fall onto a cement surface, leaving my feet bruised and my ankles sprained. I got myself back up to the train station and made my way directly back down to Bourne End, skipping the back half of the Manchester trip for obvious reasons.

While then I wasn’t sure how serious things were and feared the worst, today I can say that I dodged a bullet. Things have already begun to feel better and I’m walking close to normal. It will probably be a week or so before I even try to run or do anything strenuous on my legs, with the main focus to be 100% by the qualifiers in May. Moral of the story is that this was an unnecessary risk that didn’t need to be taken. Luckily the result wasn’t catastrophic, but that shouldn’t divert attention from what could’ve happened. With climbing, especially, precaution must win out over adventure in an untested environment. Needless to say, the next week or so will be upper body dominant routines and a lot of ice and ibuprofen to help the healing process along.

Posted by anywherefit at 4:24 PM